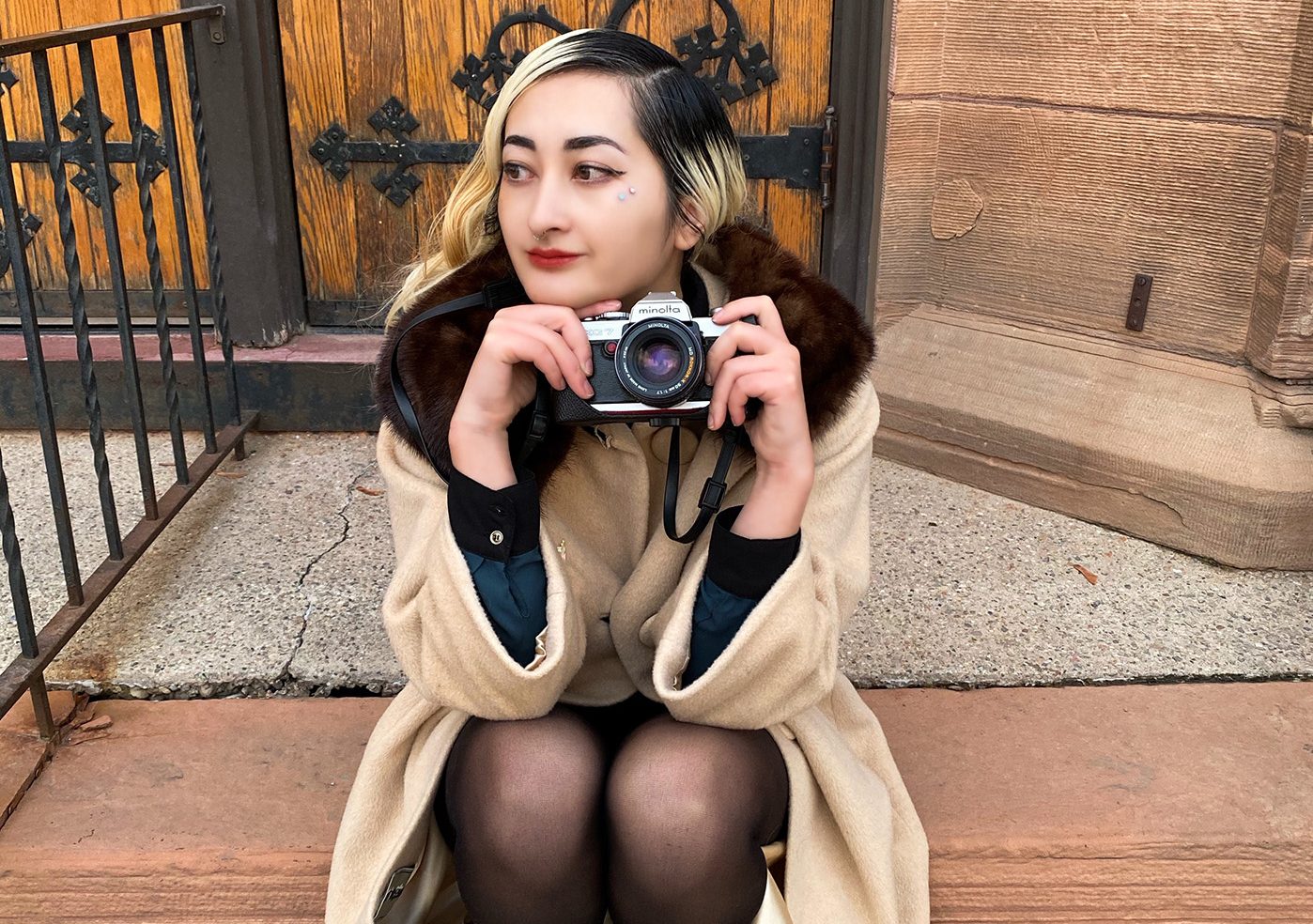 Self-taught in experimental film photography techniques, Yexenia Young approaches her art with a bold creativity and the desire to further each frame into another dimension. Browse her portfolio and you’ll find kaleidoscopes of light and color, transcendent double exposures and sincere moments captured as vivid poetry. All neon and gossamer, Young’s body of work is a glittering fever dream.

“I originally started shooting film when I was in high school, using disposable cameras and polaroids. But it was more for my amusement back then, a fun way to document teenage antics,” Young says. “It wasn’t until about four years ago when I took a course in darkroom techniques at Utah Valley University that I started to take shooting film more seriously.” After learning how to process film in a darkroom, Young was obsessed. She would spend the entire day in the lab processing black-and-white film and making silver prints. “Putting my energy into photography in this way helped me through one of the darkest times in my life,” she says. “It forced me to be in the moment and see things from a different perspective both literally and figuratively.”

Combining analog photo techniques with modern editing technology is an artistic liberty that Young takes great advantage of. If you find yourself using the word “dreamy” to describe the aesthetic of her finished product, she’s achieved her goal. “I have a strong connection to dreams,” Young says. “[Capturing] certain feelings or images that you might see in a dream is a lot of what I have strived to do with most of my work … I’m really drawn to moody aesthetics that remind you of your favorite dream pop or shoegaze song. I love finding photographs where you forget that you are looking at a photograph, and instead you get lost in experiencing the moment that was captured, usually one of longing, pensiveness or passion.”

“It forced me to be in the moment and see things from a different perspective both literally and figuratively.”

Pushing the limits of traditional techniques, Young often transfers her images onto wood, fabric or transparent and metallic papers. “I always want to take the final photograph a step further and make something more out of it,” she says. Take “Stardust” for example. In this photograph, a young woman gazes toward something in the distance, her features blurred by magenta tulle. In the foreground, ethereal pink roses are overlaid with piercing sparkles. “[Stardust] was layered digitally but captured on film,” Young explains. “One image had a photo where I shot fireworks with a lens filter to get the starburst effect, and the other image was of the model. Then I messed with the colors on photoshop.” The resulting piece, like so many of Young’s others, is fantastical, transportive and anything but subtle.

While there are certainly downsides to shooting film exclusively—the expense of buying, processing and printing film, to name a few—Young knows the benefits far outweigh the cost. While any iPhone-brandishing user could point, shoot and allow today’s technology to automatically arrange levels of exposure and ISO, shooting film essentially forces a photographer to truly understand their camera in order to manipulate light. “You could be missing out on a whole other world of photography that comes with being able to manipulate your photos through those settings,” Young says. “And there is something about having a tangible item afterwards that makes the connection with your work feel that much deeper. It can be heartbreaking to work so hard on a beautiful shoot just to realize you made an irreversible mistake. But on the flip side of that, when every element comes together in just the right ways, it’s like striking gold. The feeling is exhilarating.”

For Young, establishing a strong concept or theme before curating a photoshoot is an essential element of her creative process. “I hope [my photographs] catch viewers off-guard and make them want to look deeper,” she says. “I hope to inspire curiosity with a touch of solace, maybe even travel through space and time and connect with that magical feeling of waking up from a lucid dream, questioning your own reality.” Young sometimes creates a mood board of inspired images that align with her chosen theme. “My favorite photoshoots though are the impromptu ones, where you are at the right place, at the right time, with the right people,” she says. “I bring my camera almost everywhere I go. You never know when you’ll run into inspiration.”

“I hope to inspire curiosity with a touch of solace, maybe even travel through space and time and connect with that magical feeling of waking up from a lucid dream, questioning your own reality.”

Young hopes her photography transports and inspires its viewers, but she is also dedicated to using her talents to better her community. Young recently released her first photo zine, titled “Salt Lake City, I Love You,” comprising her own photography alongside the work of other local photographers. The anthology raises money for the Open Air Shelter Coalition and the Utah Migrant Mutual Aid Fund, and a share is given to the contributing artists as well. “I think activism has a lot to do with making connections in your community,” Young says about the project. “I hope this zine can bring more awareness to the important issues that our undocumented and unsheltered folk face. It’s a beautiful break from visual screen consumption— a small time capsule, a physical symbol of solidarity … Being able to come together and help support each other is so important, especially in these times.”

Much like her photographs, Young’s future is scintillating. She plans to release a short film this summer with local filmmaker Shawn Saunders, is working on a show featuring her photographs printed as serigraphs and has accepted an artist residency at the Chateau d’Orquevaux in France. Locals ought to keep an eye out for “Salt Lake City, I Love You Vol. 2” as well. Photographers interested in submitting their work to Young’s second photo zine can follow along with her on Instagram (@yexeniayoung) for forthcoming submission details and deadlines.