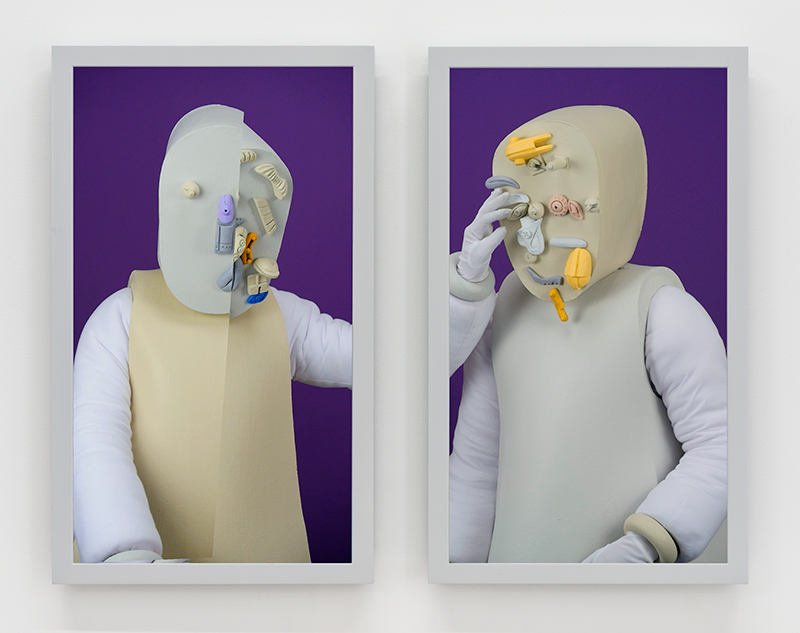 Go, Find and Make Your Own Friends: Brian Bress @ UMFA

Brian Bress’ work is characterized, literally, by a motley squad of imaginative, humanoid figures—friends—crafted out of upholstery foam, clay, paint, found objects and, in some instances, googly eyes. The figures are filmed in front of bright backdrops, portrait-style, and then hung up, painting-style. Featured as the twelfth installment of the salt series at the Utah Museum of Fine Arts (UMFA), LA-based Bress collaborated tirelessly with Whitney Tassie, Curator of Modern and Contemporary Art at the UMFA, and Nora Burnett Adams, Curator at MCA Denver, to devise Make Your Own Friends, a varied and in-depth 10-year retrospective of Bress’ practice. Older films, masks, lined paper doodles, alluring collages and sizable costumes line the salt gallery. Throughout the UMFA’s permanent collection, Bress’ films are scattered, affixing contemporary interventions and Easter eggs alongside Utah landscapes, European portraiture and Southwest Pacific body masks. It’s a treat to follow through the evolution of Bress’ practice. In the 2006 “Being Bamboo,” Brian Bress dons a mask, a shiny metallic shirt and skeleton gloves and stands in front of a bamboo forest backdrop, gripping a long piece of wood that has been painted green. (They’re actually IKEA legs, fastened together.) His tone is high-pitched and self-deprecating as he directly addresses the viewer, insisting that this length of bamboo could be anything, and somewhere in the zaniness, there’s a lesson of innovation and possibility—of creativity as a good thing—a theme which, along with Bress’ deliberate breaking of the fourth wall, pervades his later works. In 2010’s “Creative Ideas for Every Season,” Bress brings us on a dreamlike road trip with an Agnes Martin–inspired woman, who deadpans as she verbalizes Martins’ writings and drives a cardboard car through a surreally collaged, purple-toned desert. Bress is refreshingly whimsical with the video: The woman draws a cartoon character in the air, coasts past a suit-wearing bird and has hilarious chats with various characters, some of whom we encounter in Bress’ later works.

By the time we get to Bress’ creations from 2012 and on, Bress’ characters become distinctly less human and distinctly more costumed and anthropomorphized. They still tout one head, two arms and two discernable eyes (usually), but the figures and backgrounds wax modernist design, abstract collage and kids’ television shows. Brian Bress goes from horizontally to vertically shot videos, and he does away with dialogue and sound in each narrative and performance. The results lend to less caprice and greater intention, drawing us in with a more nuanced sense of enchantment. Most importantly, these imaginative friends of Bress’ are chronicled in the distinct processes of being, of creating and self-creating. The first figures that greet museum visitors are in “Organizing The Physical Evidence (Purple),” which features two matching characters, each in their own frame, as they dis- and reassemble, Mr. Potato Head–style, their facial features. In “Cowboy,” which is cleverly placed upstairs by the collection of Utah art, Brian Bress uses a dry-erase marker to draw and scribble onto the glass in front of him—as led by Peter Kirby, seeing as Bress couldn’t see out of his cartoon cowboy costume—acknowledging the glass that separates himself from the viewer. In another, a woman who is hidden behind a painting—which is also of a woman—methodically scrapes off tiny diagonal lines to reveal herself standing behind. In one of the exhibition’s most standout pieces, “Three Faces,” a triptych of jewel-toned palm leaves spans three screens. Asynchronously, a small saw from behind each panel begins to cut into the bottom of the image, leaving a trail as it removes bits and pieces of the photograph, eventually creating cutouts of a mouth, a nose and two eyes. Behind, a close-set pair of googly-looking eyes—which are startlingly inquisitive and emotive—peer back at us.

While Brian Bress draws deftly from multiple disciplines and is clearly informed by art history, his characters and style are frequently likened to kids’ television shows—and that’s not a bad thing. “Cowboy,” for example, is made out of the same material that The Muppets are made from, and could easily be a marker-wielding, picture-drawing, live-action character on Sesame Street. There are no explanatory texts next to any of Bress’ works—instead, he leaves things open, creating bright compositions, curious characters that break the fourth wall and goofy, sometimes lowbrow undertones to visually captivate and allure viewers, inviting them to engage with his art, to feel that they can approach his art in the first place. Like a character in a children’s television show, each Bressian friend is an inventive, inspired delight, interacting with viewers—and surrounding works of art—directly and sincerely.

Brian Bress: Make Your Own Friends will be on exhibition at the UMFA through Jan. 10, 2016. For more information about the museum, the exhibition and related programming, visit umfa.utah.edu/salt.