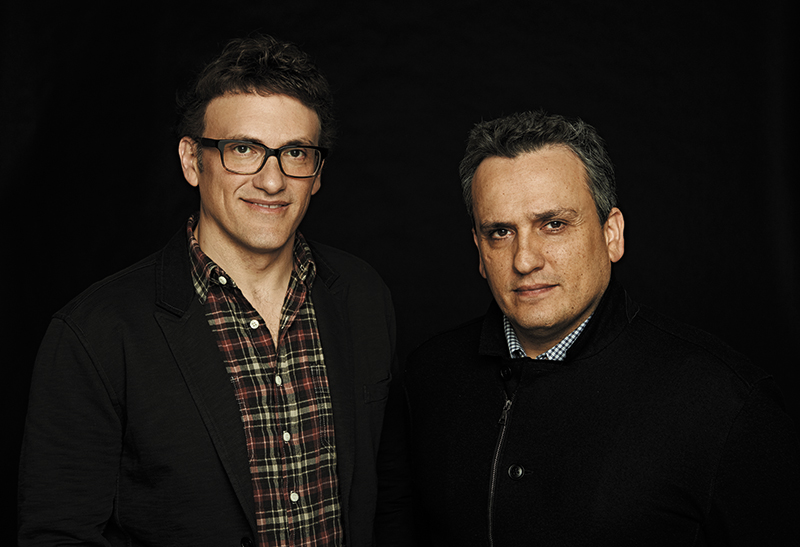 It’s around 9:30 p.m. on the night before the new trailer for Avengers: Infinity War is scheduled to go wide, and I’m waiting for a phone call from Joe Russo. For all I know, he and his brother, Anthony Russo, are finalizing a few last-minute touches on the trailer for what promises to be one of the biggest films of 2018, and he’s gonna call me? For a moment, the whole situation feels unreal—like I was the butt of a cruel joke engineered by my editors. But, sure enough, my phone rings and on the other end is 50 percent of arguably the most important directing duo in the known universe.

So why, you may ask, is he calling a punkass like me? Because SLUG is in Utah, and Utah happens to be home to the Slamdance Film Festival—a festival that holds a place of reverence in the two filmmakers’ hearts. They recently revealed that this year’s Slamdance would see the inaugural presentation of the Russo Brothers Fellowship Grant, a prize that includes mentorship from the Russos, an office at their new studio in Los Angeles, and $25,000 to finance one lucky filmmaker’s next big project. “We feel that we owe a karmic debt to the universe,” Joe says. “We really felt like this was a great opportunity to give back to Slamdance, which gave so much to us.”

Before Joe and Anthony Russo became well-known directors by helming key episodes of Arrested Development and Community, and eventually taking the reins of Captain America: The Winter Soldier and Civil War, the brothers were like most indie filmmakers—passionate, starving and driven. In the mid-’90s, the brothers made a film called Pieces, which they shopped around for distribution in New York. “It was the kind of market where you sell commercial movies, but ours was noncommercial, so most everyone walked out of the theater during the first screening, except for a few people at the end,” Joe says. “They introduced themselves to me and my brother and said they were the founders of Slamdance, and wanted to know if we would show the movie at their festival.” When Pieces premiered at Slamdance in 1997, it caught the attention of industry veteran Steven Soderbergh (Ocean’s Eleven, Logan Lucky), who offered to produce the Russos’ next film, the 2002 heist comedy Welcome to Collinwood. “It jump-started our entire career,” Joe says.

For many wide-eyed, sleep-deprived indie filmmakers, the Russo brothers represent a Cinderella story of sorts—the possibility that the right film at the right time can launch their creative voices into the stratosphere. “Undiscovered voices are what ultimately drive the film business into places that it normally wouldn’t go,” Joe says. “It’s invaluable for a festival like Slamdance to exist because it’s one of the only places where you can discover those unique voices.” Joe credits Slamdance’s role in independent cinema to the festival’s President and Co-founder, Peter Baxter, whose unwavering vision has made the festival what it is today. “Peter is one of the foremost scions of independent film in the country,” Joe says. “He’s a dear friend of ours, and a real champion of independent voices. It’s a dream come true to give back to him what he gave to us all those years ago.”

As Slamdance 2018 will be the first year that the Russo brothers will offer their grant, they are looking for fearless filmmakers who aren’t afraid to lob a Hail Mary or two in the pursuit of transforming the medium of cinema. “Most movie-goers are so sophisticated now that their palate is so in tune with three-act-structure storytelling that it’s hard to find ways to surprise them,” Joe says. “We’re looking for voices that are disruptive and take chances to bring something new to the table and point us toward more groundbreaking ways to tell stories.”

For those who doubt the indie circuit’s impact on commercial filmmaking, take a moment to look at Marvel’s current recruitment record. In addition to the Russo brothers, Marvel has sought out filmmakers like James Gunn (Guardians of the Galaxy) and Taika Waititi (Thor: Ragnarok) to direct their biggest films precisely because they had the grit and creativity to make wonderful things happen with their own independent projects. “Marvel is doing what Slamdance does,” Joe says. “They look for unique voices and radical storytellers who are going to bring something different and exciting to each story, and it’s been very effective for them to bring people from outside the machine to tell stories from inside the machine.”

With Slamdance fast approaching, it’s the perfect time for hotshot new filmmakers to check out the festival and light the fire under their asses to get ready for 2019. “We used to tell young filmmakers to pick up a camera and just start shooting, but now you can just pick up your phone,” Joe says. “It’s less of a risk now because you can do what we did for much cheaper, so I would encourage young filmmakers to just get out there with their cameras.” For risk-taking filmmakers who are looking for a little extra incentive to be daring, take heart in the fact that Joe and Anthony Russo will be watching.