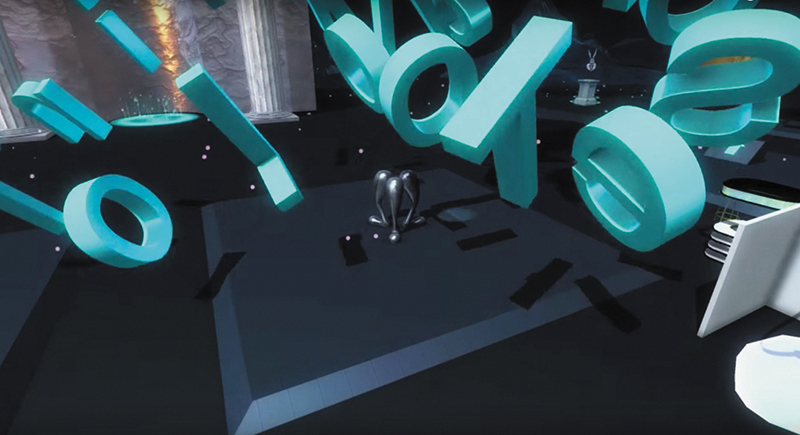 Infinit-O is a video game that reaches into the bizarre. Navigating a set of three chrome legs through an abstract dreamscape of seemingly random objects and words, the player is confronted with the absurd and artistic at the same time. The idea was dreamt up by LA-based conceptual artist Corazon Del Sol, granddaughter of gallist Eugenia Butler and daughter of conceptual artist Eugenia P. Butler. Infinit-O incorporates themes from all three lives into the game, as well as recurring themes of feminism, the unconscious and art itself. Infinit-O can be experienced at the DIG (Digital, Interactive and Gaming) showcase at Slamdance Film Festival 2017, held Jan. 20–26.

Infinit-O was originally part of a show titled Let Power Take a Female Form, which presented the intersecting lives of grandmother, mother and granddaughter. In the narrative of the game, themes are present from all three lives, most apparent in the avatar of the game itself, a set of three chrome legs that Del Sol says came to her in a dream. They represent three generations of women as they navigate through different obstacles and interactive pieces in the game. While some of the objects seem somewhat random, there are several nods to the art world, including a giant piece of cheese, which is a reference to Dieter Roth. In one exhibition that premiered at Eugenia Butler Sr.’s gallery, Roth filled a gallery with cheese enclosed in suitcases. For Del Sol, the unity of the three generations in Infinit-O is personal, but encroaches upon recurring themes of women’s empowerment and understanding art. “It’s personal, but it’s also universal,” says Del Sol. “It’s also about the colonization of the art world; its also about the feminine in a patriarchal society…it’s about the power of the unconscious as a tool to navigate through things that are difficult.”

For Del Sol, delving into the realm of video games was a completely new medium for her art. “I originally just made the piece as an artwork for a show I did last year,” she says. “I wasn’t trying to make a video game. I didn’t know anything about video games.” The decision to explore the realm of video games gave Del Sol a new dimension in which to display her ideas. “You can relay really interesting things through a video game—there are so many constructs that you get to design,” she says. “I think video games are such an amazing medium because your virtual body is moving through the world the designer creates for you, so you can experience where time becomes fluid or where space becomes fluid or where falling is OK.”

The movement of the legs in the game is clumsy and slow, encouraging the player to interact with the objects in the space rather than reach a specific destination. “You can’t really move that quickly,” she says. “There’s no goal. You’re not fighting anything—all you can really do is point in the right direction and go that way and see what happens. There’s really nothing bad that can happen, the same way a dream is.” Stylistically, this is a departure from the achievement-based model that takes precedence in most video games. “I almost kind of want to rewire the brain from the capitalist, achievement model,” says Del Sol, who aimed for Infinit-O’s model to be “much more about feminine intelligence.”

One of the more provacative statements that Infinit-O makes is with the unique controller for the game: a vagina. “I was really confused why all the joysticks looked phallic,” says Del Sol. “ I realized that it’s not just joysticks. All of our tools of control are phallic, and they don’t need to be. Once I saw that, I became really angry. I was like, ‘That’s a construct that limits the way we see power,’ so we’re always, as a culture, going to unconsciously align power with masculinity.” She admits that the vagina controller can be viewed as “overboard,” but it was at once both a statement against the patriarchy and another element to add to the games’ subconscious absurdity.

Although Infinit-O can be overwhelmingly bizarre by typical video game standards, it is also an art piece with an almost unconscious dreaminess that sticks with you after it has been experienced. For Del Sol, a successful art piece is one that may be shocking and provoking, but lingers in the mind. “Hopefully, in good artwork, it hits you over time—it’s not just something that you take away, right away,” she says. “It takes a sort of listening or presence to play the game.” As far as the statemtent Del Sol wants the player to take away from Infinit-O, it’s an overt rejection of the patriarchal, and a challenge to think differently. “How do you dislodge logic?” she says. “How do you get the viewer to just sort of enter a dream state while they’re playing?”

Infinit-O will be at the Slamdance DIG showcase in Park City on Jan. 20–26. For more information, visit showcase.slamdance.com/DIG.