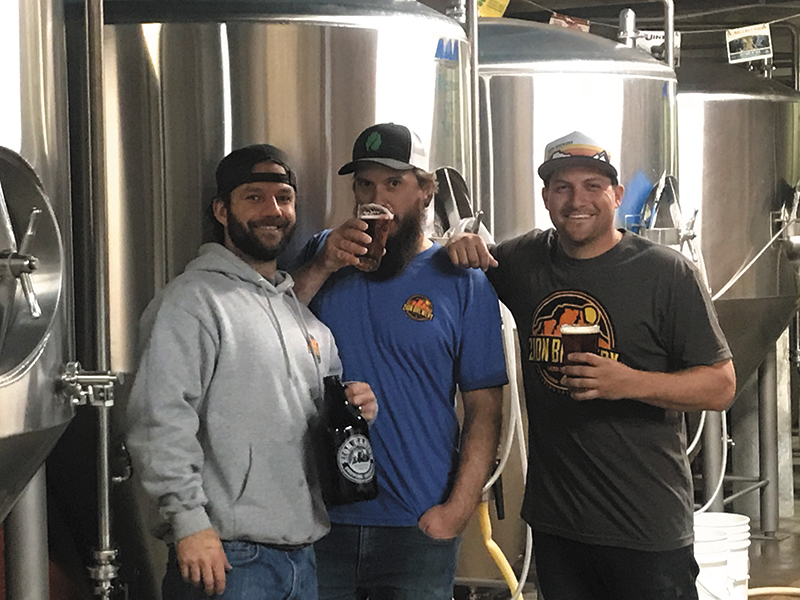 Zion Brewery has gone through more than a few changes over the years. But with a fresh start, the gloves are off for Utah’s southernmost brewery. Located in Springdale, the gateway to one of our state’s most famous and scenic national parks, the brewery has ample opportunity to capitalize on the booming tourism business of the area. Zion Canyon Brewing Company, as the brewery was originally called, was founded and owned by Dale Harris, who oversaw its inception and operated as Head Brewer. Harris expanded, opening a brew pub and even bottling several core brands like Virgin Stout and Jamaican Lager for distribution as far north as Salt Lake City. With expansion came additional cost, and Harris sought some investors, most of whom left the company within a year. One who didn’t was Brooks Pace, owner of the Majestic View Lodge in Springdale, the basement of which currently houses the brewery. By 2013, Harris was gone, and Pace had purchased the entire brewery, bringing in new staff to help with quality and sales. Jeremy Baxter started in late 2013 and assumed full Head Brewer responsibilities in 2014, while Brooks’ son, Cris Pace, began managing the brewery.

The brewery lost some ground before the current team took over. A change was needed in the way the brewery operated, and sacrifices had to be made. “We had to cut down to bare bones, [so] we dropped our distributor and scrapped the bottling line,” Pace says. “We wanted to get our keg line solid and pretty much started from scratch.” That meant reorganizing the brewery from the floor up: cleaning tanks and other equipment, reformulating recipes and improving practices across the board. “It was exciting and very stressful and very demanding, but I was up for the challenge,” Baxter says of the long hours and difficult work required. “It took a long time with me down here hustling and fine-tuning for the reputation to start to build.” And slowly but surely, the ground that had been lost was starting to be earned back.

Some breweries have a hard time emerging from a setback like the newly rebranded Zion Brewery experienced, but having the right people in the right places can make all the difference. With the return of quality and exciting beers, it was becoming tough for Baxter to keep up. After a few candidates came and went, Baxter hired Jay Mecham as his Assistant Brewer, and the impact was immediate. “He came in when we were so far behind the eight ball and learned so fast,” Baxter says. “The quality and attention to detail was so good that I know for a fact [that] everything is being done correctly.” Both Baxter and Pace agree that a key element to their progress has been Sales and Distribution Manager Frank Giammalva, who came on in late 2016 to help handle the increased demand for Zion Brewery’s beer. “He’s been a great pickup for us,” Pace says, “getting new keg accounts left and right.” The passion that each of these team members brings with them to work is palpable, and they have good reason to be excited.

With excellent staff and the right leadership, Zion Brewery shifted the focus back to the beer, and Baxter’s continued devotion to improvement shows in the draft list available at the Zion Canyon Brew Pub right at the mouth of Zion Canyon National Park in Springdale, less than three miles from the brewery. There are many to highlight, but something that jumps out immediately is Foray, a kettle-soured ale flavored with pomegranate. This adventurous ale is technically difficult to brew, but Baxter wasn’t daunted. “It’s so great to have something beyond what people expect, especially from a small, little brewery,” he says. Early batches of this beer earned them recognition and interest at last year’s SLUG Mag on Tap beer festival in Salt Lake City, the first event that the brewery had been able to participate in for several years. In addition, there are some reborn classics like Baxter’s newer take on the Jamaican Lager and new additions like the Echo Canyon Session IPA, a favorite of Pace’s.

The brewery produced just over 1,100 barrels of beer last year and sold all of it to regional accounts, many located in Springdale itself, but also as far afield as St. George, Cedar City and Kanab. This year, Baxter hopes to do closer to 1,500 barrels, and thoughts of expansion and the future are definitely on everyone’s mind. “We have one more bright tank coming in June, and that will give us another 30 barrels a month, maybe more,” he says of 2018. The team is also beginning to talk about bottling and canning again, distribution and even doing some high-point beers for sale at the brewery or in liquor stores. “We’re taking things a step at a time,” says Pace. “We’ve learned from past mistakes: If you reach too far, it can bite you.” But with the patience, energy and love for the craft that this small brewery exhibits, don’t count on them losing ground anytime soon. Look for Zion Brewery beers the next time you’re down exploring the area’s amazing natural heritage, and raise a pint for the hardworking Utahns who make it happen.