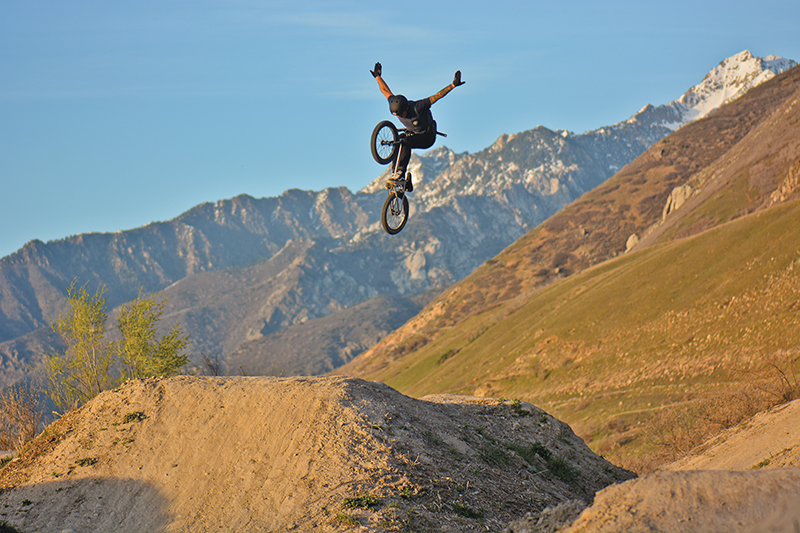 Building a Legacy: The Story of the Draper Cycle Park

The sport of cycling has deep roots in our state. From nationally recognized events like the Tour of Utah to the globally acclaimed slickrock trails of Moab, there is no shortage of fun and excitement on two wheels. What’s more, our elected officials have become increasingly supportive of the sport and what it means for the health and vitality of our populace. Bike lanes, bike sharing and now cycling parks are showing up in more areas of Utah than ever before. In the City of Draper, a new spin on community engagement is entering the fold. The Draper Cycle Park, located at 1455 E. Highland Drive, is going on its second year of being open to riders.

“In 2007, we started out as a grassroots group who wanted to build a velodrome,” says Salt Lake Velodrome Association (SLVA) founder John Newell. “The Salt Lake Velodrome Association, a 501 (c)(3), was the original effort to raise awareness and funds for the project.” For those outside cycle racing, a velodrome is a closed-circuit oval track with banked turns. Typically, they are a few hundred meters in length, several lanes wide and ideally suited for single-speed, flat-bar road bikes. In the early 1900s, there was an elaborate velodrome located on the shores of the Great Salt Lake. It tragically burned down and was never reconstructed. Since then, there has been fervent talk among the core cycling community to get one going again. The SLVA pitched the idea to city officials in both Ogden and Salt Lake, but it was Draper that finally picked up the ball. Deciding that the costs associated with acquiring land and building such a facility would be quite high, the SLVA reorganized and rebranded as the Draper Cycle Park Association (DCPA) around 2010. The city had just donated a large swath of underused land near the mouth of Corner Canyon to the project, and the DCPA and Draper City officials developed master plans for a multifaceted venue catering to all forms of cycling.

In 2014, DCPA board members began working in earnest to continue attracting attention to their cause and promoting cycling to a larger audience. “One particular challenge was finding the right kind of dirt to construct the pump track and jump lines,” says Newell. It turns out that the sandy soil in the area didn’t have the right amount of clay content that is optimal for jump sculpting. Fortunately, they were able to find what they needed at a construction site west of I-15. The DCPA hauled truckloads of precious dirt across the valley, and a company from Park City, Sage Brush Trails, executed the actual layout and building. The overall process took the better part of a year and revolved around placement of the pump track and three surrounding, concentric jump lines. The jumps are built to be progressive and to allow riders to build confidence. Each line picks up where the last left off. Additional teams of builders also constructed several mountain-bike skills sections and a short-course cyclocross track near the pumps and jumps. Cyclocross is quite a popular sport in Utah, and it combines the technical handling of mountain biking with the anaerobic endurance of road cycling. The separate cyclocross course features a custom-built flyover (bridge) and staircase.

These adjunct facilities allow DCP to attract a wide spectrum of riders from across the region. “The courses are versatile and continually host events like the Utah Cyclocross Series, Intermountain Cup and Utah High School Mountain Biking,” says Newell. Even more impressive than the organized races is the sense of community that the park has fostered since its grand opening in June of 2015.  “The pumps and jumps have been received incredibly well,” says DCPA board member Chris Bingham. “Last summer, there were dozens and dozens of families enjoying the park every evening. I love the family aspect that has taken root. When I spoke to some of the parents about the bike park, they said it was one of the coolest things ever for their kids. They have a hard time getting them to leave.”

As DCP opens for its second season, the DCPA continues to make small improvements to the venue, such as better parking, dedicated water fountains and cyclocross course expansion. The Go-Ride bike shop has also agreed to be the volunteer trail-maintenance provider for the pumps and jumps. “There is a culture of helping to build what you ride,” says Bingham. “‘No dig, no ride’ is the phrase often used related to trails and parks. It also applies to the maintenance aspect as well.” Dig days are held each season, and more info on getting involved is available at facebook.com/DraperCyclePark.

With the earthen features completed, the DCPA now aims to keep the momentum by coming up with new ideas for DCP. As a test piece, a small contingent of builders have created a modular, wooden “mini-drome” that can be taken from place to place. Newell hopes that this concept will show people the potential benefit of a permanent velodrome. Fundraising efforts are ongoing as the DCPA works to raise $1.5 million for construction. Additional info about donating and volunteering can be found at saltlakevelodrome.com.