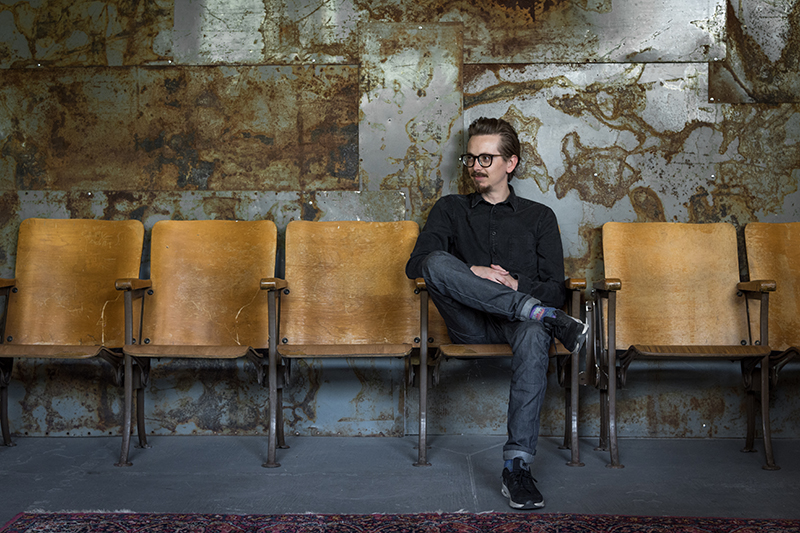 Chad Kirkland Photography: A Journey from the Dark Room to the Light Side

Nestled on the side streets near downtown Salt Lake City, hip-hop bounces between wood panels and a buffalo skull, which hangs from a colorfully rusting wall. Two speakers and a turntable are sandwiched between two standing rows of vinyl as the evening sun floods through the windows of Commonwealth Studios. Rows of photos still hang from the walls from the open studio and group show in April, many of which are a series of beautifully chilling portraits by Chad Kirkland.

Kirkland is a local freelance commercial and editorial photographer. He has shot for companies like Google, Converse, Gregory, The Wall Street Journal and more. More impressive than his list of clients, however, is his work. “It’s my typewriter, my paintbrush, my microphone and amplifier,” he says, referring to his camera. “It’s how I take what I see—what you see—and create an image that encapsulates a story, a feeling, a message.” While those words are easy to say, it is much harder to do. Kirkland’s photos speak for themselves, for his subjects and for himself. Kirkland didn’t just get lucky; he hustled. His success derives from multiple jobs, many lessons learned and probably a multitude of SD cards.

He realized his affection for portrait photography after years of taking photos whenever and wherever he could, eventually “discovering what [he] was and wasn’t good at.” Kirkland first took photography classes during high school, where he began to capture the world through black-and-white film. Perhaps it was the ability to freeze time or the mesmerizing process of developing film, but he returned to it time and time again (literally). He repeatedly enrolled in the same photography class and even admits to “skipping other classes to spend more time in the dark room.”

After high school, Kirkland enrolled in classes at Salt Lake Community College, which gave him access to the dark room and the next plot hook in his story: finding his place in the commercial photography program. “I started to figure out what I liked and didn’t like to shoot,” says Kirkland, who typically refrains from architecture and landscape photography. “My favorite thing is portraits,” he says, though it took some time to overcome the initial intimidation that comes with “shoving a camera in someone’s face.”

The commercial photography program at SLCC helped Kirkland realize the possibility of creating a career out of craft. He began to build a portfolio of work, shooting for “small magazines and newspapers, like SLUG Magazine and City Weekly,” and taking photos of his friends skateboarding. While Kirkland confesses he was “better at taking pictures than [he] was at skateboarding,” he continued to gravitate toward portraits, surrendering himself to that aspect.

Kirkland immersed himself in his work and the industry. “After graduation I started assisting some commercial photographers in town,” says Kirkland, while also working at Inkley’s Photographic and in the SLCC photo lab. He assisted full-time for three or four years, working with commercial/lifestyle photographers like Erik Ostling on catalog shoots for Crate & Barrel and Melaleuca. Kirkland eventually landed an in-house job for an online retailer as a product photographer. Though he calls it “the boring stuff,” that taught him valuable lessons about efficiency from start to end. He was able to learn among industry experts and draw inspiration from those he admired and assisted. He eventually found himself in a position to leave the job that “wore on [him]” and ventured out on his own as a freelance photographer.

Freelance work has given Kirkland the opportunity to more freely apply his personal style to each individual picture or photo series, while still meeting the needs and expectations of clients. “There’s not much difference between my personal and commercial work,” says Kirkland. “I tend to be more experimental with my personal work so I don’t burn out.” In any case, Kirkland is a visual storyteller, in a bit of a dark and aesthetically moody way. His portfolio is filled with images soft yet striking in color, artfully positioned among ranging angles of light, focused perfectly in environments that evoke the stories behind his subjects.

Kirkland often shoots at Commonwealth Studios, which he shares with two other local photographers, Michael Friberg and Michael Kunde , though his work is not confined within the studio walls. He often travels cross-country and over international seas to find the perfect picture with the perfect light and the perfect expression.

Lengthy travel, however, isn’t always required. In one shoot, he simply went to the home of one of his subjects. “He was put in prison for a 55-year term for possession of marijuana,” says Kirkland, as he examines a black-and-white picture of Weldon Angelos. “Technically, I was hired by the Koch Brothers—they have a criminal justice reform group, and they hired me to photograph him because they helped to get him out of prison.” The photo capitalizes on precise lighting that evokes and simulates the prison cell where Angelos still spent 14 years in prison.

While Kirkland photographed Angelos for commercial assignment, their relationship continued—one of many relationships formed throughout his photography career. Angelos is a musician and hip-hop producer who “worked with Tupac before he was put in jail, and Snoop Dogg. He’s putting out an album, so I shot his album cover,” says Kirkland. “We kept to the same vein as this photograph, but a bit more staged and in the studio, but still lit to look like prison bars.”

Kirkland slides to the next photo, where Jimi Hendrix lingers prominently behind Provo-based, Billboard-ranked band, The Aces, at Velour. “I wanted to do something more environmental,” says Kirkland, “and since they’re from Provo, and they play at Velour a lot,” it plays to their story and background. Investigating and understanding the history of his subjects helps Kirkland plan everything from location to the time of day that produce the best and most telling photographs.

Before you quit your job to become a photographer, Kirkland emphasizes the work that needs to done in order to be successful but is often unseen. Kirkland doesn’t drastically change his photographs but simply aims to “get it right with the camera,” which results in less post-production edits and allows for the much-needed time to spend on the less glamorous tasks. Kirkland and his wife, Hillary Kirkland, spend hours and days navigating the administrative side—marketing, invoicing, production, coordinating models, booking locations and more. Commercial shoots typically last 10–12 hours, “starting before the sun comes up.” Good planning is key, and to get the best use of time, “We often schedule down to the minute,” says Kirkland. “Budgets are getting smaller, so companies are trying to get a lot more done in a day,” which can be done—if you’re efficient.

Efficiency, among other things, is something Kirkland has learned from years of working with industry professionals. Now he hopes to share some of his knowledge with others. He has come full circle, now using one or two assistants on every one of his shoots, many of whom are recent photo-program graduates or individuals just trying to get more experience. “I like to take them in and take them out on my shoots and put them through a lot of different situations where they can work hard and learn a lot, like I did,” says Kirkland. “When I was an assistant, I learned a lot about the production side, working with talent, lighting and figuring out how to make it work.”

Though the work has been hard, it has always been worth it for Kirkland. It’s how he got to where he is now, a standout in a sea of photographers. “In order to stand out, you have to create something special,” he says, but it’s up to you to figure out what that means personally, and it takes time and a lot of trial and error. “Go out and take as many pictures as you can,” but remember that “photography is just a small part of being a photographer. Another huge side is business, production, marketing and bookkeeping,” says Kirkland. But, you also have to be more than good at business and photography: “You have to be a nice person and you have to be easy to work with, or [clients] are just going to move on to the next photographer.”

Kirkland has mastered the art of portraiture, of time and of kindness and ingenuity. While his career and life have been devoted to shedding light on others in order to share their stories, in the end, the light shines toward him, and it is his story I’m telling.