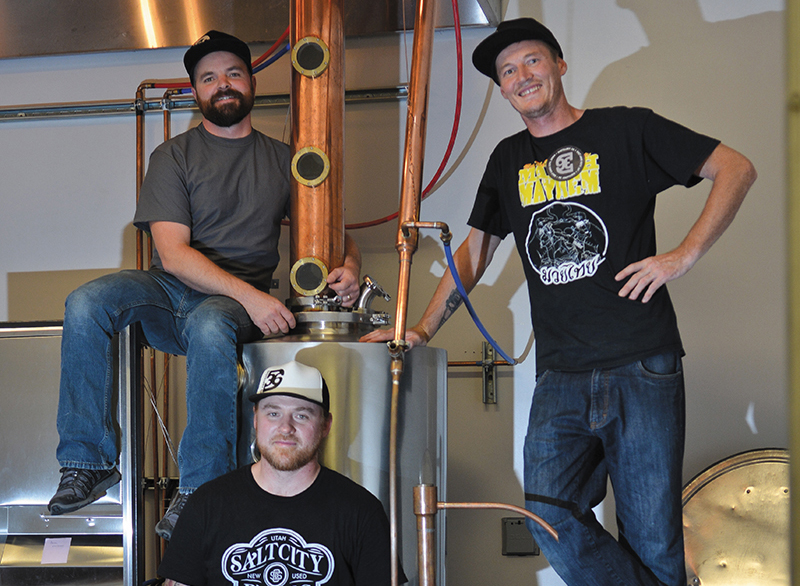 At Distillery 36, the Jensen Dobbs, Creed Law and Jon Gregersen triumvirate is hard at work keeping their dream of being a premier purveyor of fine spirits alive and well in the unlikely state of Utah. They are currently expanding their operations and developing their business model in a thoughtful manner, aiming to create a quality product at a fair price while rediscovering the passion that led them down this road.

“Being the first distillery in West Valley City has had its share of challenges and successes,” says Dobbs. “We were really lucky to find this space that was zoned properly and would accommodate our needs.” Their space is an evolution in the making and offers a prime work environment for these artisans of alcohol to hone their craft. Law possesses an extensive engineering background and leads the charge in repurposing old food-industry equipment to meet their demands. His first fabrication project was a still made from an old beer keg many years ago.  Since then, his enthusiasm for creating functioning works of mechanical art has continually grown.

“Building the fermenting tanks and stills is really the most enjoyable part” says Law. “I love finding junk and giving it new life.” His constant quest for stainless steel tanks is admirable—he travels all around Utah looking for items that can be modified for the purposes of distilling. “As we scale up our equipment and increase quality, we can also increase production and our offerings,” he says. Currently, the crew has just acquired a vintage 300-gallon tank from the former Hostess plant in Ogden. This will be a welcome addition to their facility, and Law will be working to retrofit it for their needs during the coming winter.

From the beginning of their venture in 2013, the team has focused its efforts on producing silver rum by the name of Brigham Rum. This product meets the United States Standards of Identity for rum alcohol and is created using the finest unbleached sugar that they can acquire. The fermentation tanks turn the ingredient mix into a “wine” or mash that can then be transferred to the still. This process is now sped up by an upgraded transfer pump and takes much less time than did the original iteration. Once in the still, the real magic begins. “When the alcohol percolates upward, it concentrates further and reaches a proof of about 180 [90-percent alcohol],” says Law. The spirit is then removed from the still to be further refined and the best liquid is kept for consumption.

“As we remove the impurities, we also pay careful attention to keeping the original flavors and aromas,” says Dobbs. This attention to detail is Distillery 36s signature, and they are visibly proud of each batch they create. After the rum is successfully cut down to 80-proof using de-mineralized, local spring water, the team fills and labels each bottle by hand. “We learned the hard way about using certain types of cork in our bottles,” says Dobbs. “Some left behind a bit of dust that was unpleasant to look at in the bottom of the liquid. We caught this before shipment, and the affected bottles never left our facility.” Overcoming the difficulties and learning from their mistakes allowed the team to deliver their first flawless batch to the DABC in April.  Now, they concentrate their efforts on attracting new customers by engaging the community around them. Attending local tastings, food pairing events and even festivals like Made in Utah builds on the reputation they have begun to cultivate.  “We are excited about the growing scene statewide (and nationwide),” says Dobbs. “Our membership in the Distillers Guild of Utah is a big part of our commitment to remaining engaged.”

These guys have calculatedly grown Distillery 36, but they still find time to experiment with a variety of different techniques in creating new concoctions. Utilizing oak chips to mellow their product allows them to experiment with unique potential flavor profiles to develop aged rums. “The wood chips are a good way to emulate certain flavors drawn out by a barrel,” says Dobbs. “We can get an idea of how this process will affect the rum’s taste and decide which types of barrels would be best to use. A fleet of barrels requires a huge investment.” Aged rum is in the works now and will be the second installment for Distillery 36. Creative names will certainly come with time.

As the business moves forward, Dobbs mentions how fortunate they feel to be a part of the greater Utah distilling community. “It is a lot of friendly competition, but we rely on each other in a number of ways,” he says. “James Fowler of Sugar House Distillery has been a great mentor and friend, and we speak often, sometimes daily.”

Keep your eyes open for a handcrafted batch of Brigham Rum sitting on the shelves of your local DABC store or preferred cocktail establishment. The silver pairs well with ginger beer and lime juice for a “mule,” and you’ll likely find yourself having more than one. Remember that they also have a bottle buy-back program, and you can receive $1 off your next bottle purchased at their facility in West Valley City. For more info, check out distillery36.com or facebook.com/Distillery36.