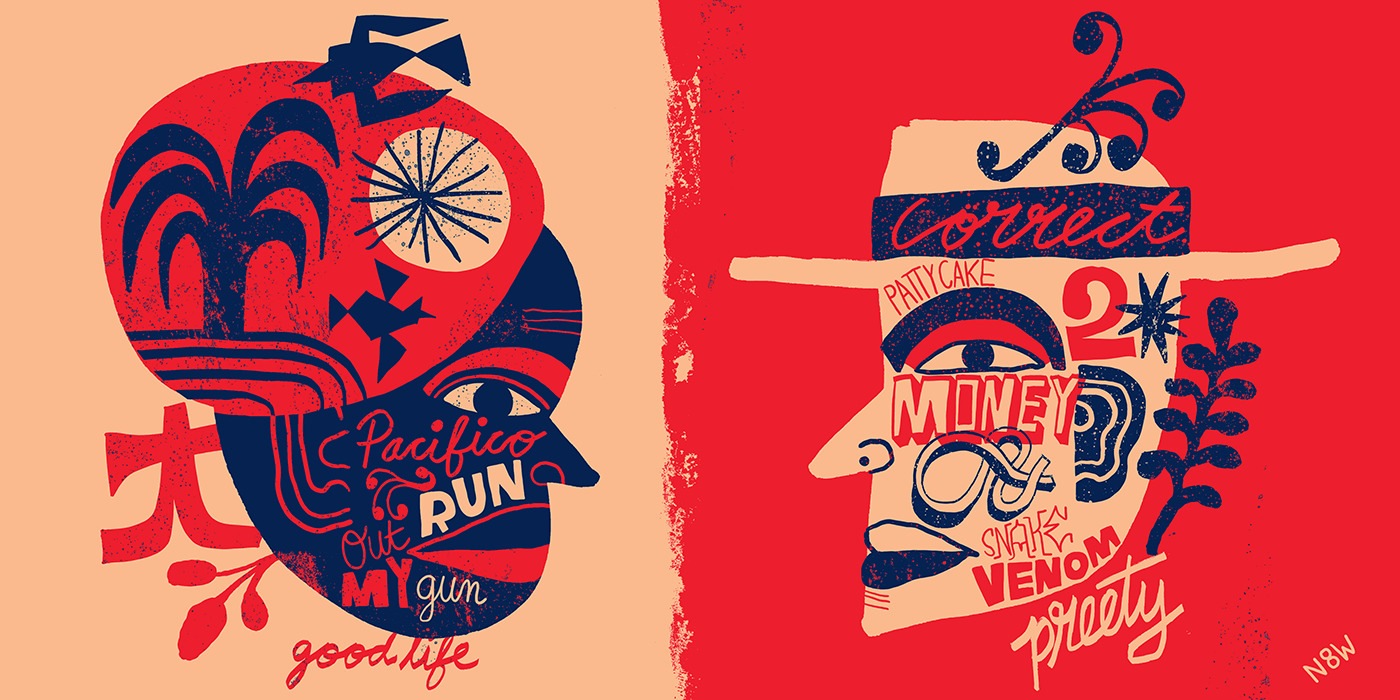 Everything Again: Nate Williams and the Illustration of Life

As a child, ​Nate Williams ​never saw himself as a future artist, nor did he know he could make a career of it. He felt the same way when he enrolled at the University of Utah as an anthropology major. “I never really thought of it as an occupation. I always thought of it as a hobby, something you do on the side for fun,” he says.

Fast-forward several decades, and Williams is an in-demand graphic designer and illustrator. His varied clients include cultural and educational institutions (Utah Symphony and Brown University), leading newspapers (​The New York Times and ​The Wall Street Journal​), the most recognizable names in the world of technology (Microsoft and Facebook), prominent publishers (HarperCollins and Puffin Books), as well as global brands (Converse, Starbucks and Coca-Cola). Widely respected in his field, he gives lectures on creativity globally in countries such as Argentina, Brazil, Canada, Ireland and Spain. Given his shift from hobbyist to careerist, you might want to know how Nate Williams got to where he is today.

If you ask Williams to explain his trajectory, he will say his story started “really early.” He begins with his childhood, long before he realized making a living as an artist was remotely possible: “I’m dyslexic, so I’ve always gravitated toward imagery because it was easier to understand,” he says. Despite this early affinity for aesthetics and visual learning, by the time college rolled around, he remained blissfully unaware of what was to come.

“From a distance, one of the very first things you see is color, secondly you see shape.”

That’s not to say his early studies had nothing to do with his work as an illustrator. Williams entered the University of Utah with the intent of studying anthropology. “I was interested in different cultures,” he says. “[G]rowing up, we had exchange students at my house.” While anthropology classes didn’t teach him perspective, figuration or shading, they did provide him with a certain understanding of the world, an understanding readily apparent in his illustrations. He often turns to the human form—almost always in profile or silhouette—not isolated and alone, but surrounded by rich environments of warm hues, verdant greenery and fellow humans and animals. It was not until later that he started delving into the arts, when he decided to take some sculpture classes. Only then did he begin to see art as a viable career—casually, at first. “I initially got my start by calling up some snowboarding companies and asked them if they would be into trading artwork for snowboards” he says.

After that first foray, he found work not as an artist, but in the corporate sphere, first as a web designer and then as an Art Director at XBox Game Studios, only dabbling in illustration on the side. It was not until he had a conversation with Los Angeles–based designer ​Gary Batesman​, who, according to Williams, “encouraged me, and that’s when I decided to pursue illustration full-time.”

With newfound confidence in the economic viability of working in the arts, Williams moved to South America, where he lived for several years as a freelance illustrator. Though he’s since returned to the United States, where he now works as both an illustrator and an art director, his time spent in Latin American countries has provided considerable influence on his artistic process. For Williams, it was cause for self-examination, a questioning of our culturally determined—and therefore contingent—powers of observation. “When you live in another culture, you become a little kid again, you start to notice everything again,” he says about living in Argentina. “I started reexamining what was mundane in my culture, but new to me in their culture.”

“There’s no recipe to be a successful artist or illustrator.”

Over the years, Williams has developed a highly original style. Though his often whimsical illustrations eschew traditional notions of perspective and depth in favor of flattened, recurrent patterns and a collage-like layering reminiscent of Matisse, they never quite lose sight of reality. Williams is a hiker, and it shows. Local Utah flora and fauna often find their way into his illustrations, especially birds. Particularly distinctive is his use of color: All of his illustrations are inflected with colors of all sorts, often deployed to create contrast with great efficiency. As with so much of Williams’ work, this is a deliberate choice, underscored by his scientific and data-informed knowledge of perception and human behavior. “From a distance, one of the very first things you see is color, secondly you see shape,” he says.

Despite navigating two jobs Nate, Williams still finds time to lecture on creativity—widely. Among other things, these speaking engagements have afforded him the opportunity to return to Latin America: In recent years, he has spoken at the Universidad Autónoma de Querétaro in Mexico and the University of Buenos Aires in Argentina. “I talk about the creative process,” he says: “Idea generation, how to change your environment and change your perspective.” Another frequent topic, and one close to home, is about “being the bridge between art and business, especially when we live in a data-driven world.”

Williams’ fundamentally democratic and unpretentious passion for creativity is wide-ranging and infectious. He sees today’s world as one rife in creative possibility. “There’s no recipe to be a successful artist or illustrator,” he says. “People have never lived in a better time to make it on their own.” Whereas previously cultural elites determined what was tasteful, the advent of the internet has signaled a democratizing of the arts, according to Williams. In today’s world “everyone can get their ideas out there.”