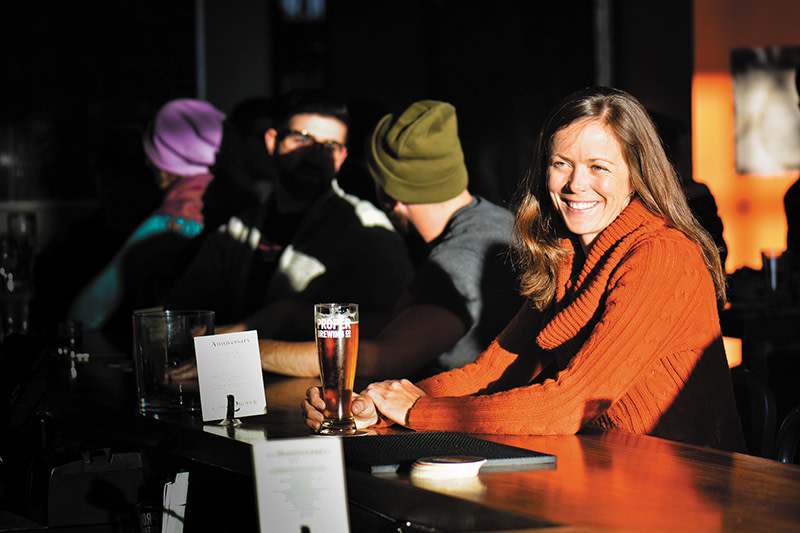 To Guild or Not to Guild: Acacia Coast on the Importance of Supporting Local Breweries

We all love beer—that’s a given—and more and more, consumers are becoming interested in what goes into the making of their beer, from breweries to brewers. Yet another level deeper are the people behind those people. Since developing a passion for craft beer after her first bottle of Mirror Pond Pale, Acacia Coast has been getting more involved and now works for the Brewers Association (B.A.)—a trade group whose membership includes over 70 percent of the American brewing industry. As the State Brewer Association’s Coordinator, she is a liaison between the B.A. and the 75-plus state guilds and local associations across the country. Utah’s guild is only five years old, but that isn’t unusual—the median age of all guilds is six years, most starting around 2009. Every guild has a similar mission statement: to protect, promote and educate about craft beer, and Coast advises them on what the B.A. can do to help.

SLUG: Why is a state or area having a brewer’s guild important to those breweries and the local consumers?

Acacia Coast: Guilds are the front lines of defense for small-brewery businesses. Each brewer can advocate on their own behalf to legislators, but when they come together with a unified voice and demonstrate the camaraderie of a community who is in solidarity about an issue, the impact speaks a lot louder. There’s never been a more exciting time to be a craft brewer, but with the increased attention comes increased scrutiny, so it’s critical that each brewer engage with their guild to keep the industry strong and flourishing. Tax increases, anti-alcohol coalitions, ill-informed legislators, limited access to market, regulatory agencies and a lack of education are all problems, and a guild speaks with one voice to defend all these small businesses.

SLUG: People often complain about the beer laws in Utah. Can you share some challenges our brewers and guild face?

Coast: The guild [has] tried to put forward an effort to add input and be part of the process, but small brewers continued to get steamrolled by our theocracy. Utah wants to attract tourism, business and revenue, but we have this taboo where we lose hundreds of millions of dollars a year from this perception that we practically still live in covered wagons—we appear inhospitable. … We can’t bring beer in without the DABC approving, not a single brand. The regulation stifles the tourism industry, stifles the brewing industry and confounds the rest of modern America to no end.

SLUG: What can consumers do to support their guild and local breweries?

Coast: Show up at the fundraising events, such as Fluid Art, a spring beer-and-art-pairing event [that happened] May 27 at UMOCA. Drink local beer, support local industry [and] put your dollars back into your community instead of into the pockets of mega-conglomerates owned by foreign interests. Reinvest in the future of your community.

SLUG: You’ve recently moved to Utah. How do you like our beer scene?

Coast: The first guild meeting I went to was here, and I was astounded. I had the same pre-conceived notions that the majority of the [American] public has. I was blown away by the high quality of the beer and the kindness and generosity of the industry.

SLUG: What do you see as the future for craft beer in general, and for Utah’s scene and guild specifically?

Coast: In general, I see a great importance in serving local communities. … Craft beer is growing. Full-flavored beer is becoming more desired by the entire world. … I see potential in the changes in legislation, and I foresee growth with more support and more education. The importance of brewers inviting their policymakers into the breweries—educating them on the business of beer—is nowhere more critical than it is here in Utah. Building a culture of advocacy is an important challenge. Brewers didn’t get in the business to be active in government, but it’s the most important responsibility small brewers have to help elevate the industry.

With an ever-changing legislative landscape come new obstacles around every corner. The B.A. works at the federal level, but Coast advises guilds at the state level, and there’s still plenty to be done. It’s also our responsibility as consumers to speak up and voice our opinion, so support your local brewery! Check out brewersassociation.org and utahbrewersguild.com for more information on what you can do right here in Utah.