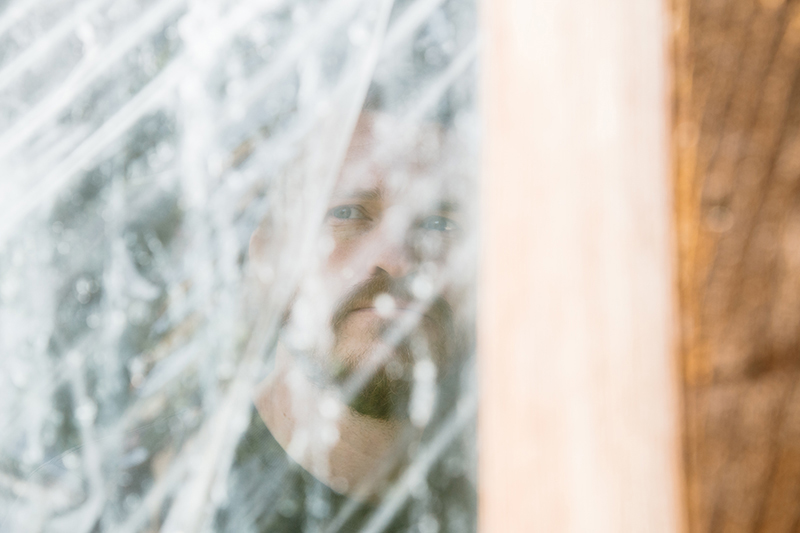 At first glance, Josh Winegar’s photography seems simple, almost mundane. Many of the works on his website prominently feature landscape shots with slight disturbances to their continuity or a superimposed effect. The closer and longer you look, however, these more disrupting aspects increase in power and influence. What originally came across as secondary additions now assert themselves as the subjects of the works. There’s something discomforting about this aspect of Winegar’s art. It constantly evades easy recognition and understanding while still relying enough enough on tradition as to not seem totally alien.

This idea of distorting the structure of reality is less of a choice for Winegar than it is an inevitability when working with photos. “Photographs can’t be the ‘real thing,’” he says. “They have to be something else. I’m personally more interested in photography as a transformative medium than as a way to accurately record anything.” No matter how far technology improves, there remains a disconnect between what the human eye naturally processes and a film or digital representation of the same image. In a sense, any artist trying to pursue this unattainable goal is effectively running in place.

When asked about his process, work or style, Winegar is incredibly particular and often elusive. In regards to whether or not he employs certain techniques or concepts when creating, his most common response is that it varies from work to work. The medium does not present a unidirectional approach to art. Rather, it expands in a litany of directions, offering Winegar a wide variety of options for the function of a piece. He’s just as likely to feature unadorned shots of a forest in I Still Don’t Know as he is to more or less crop out the human subjects Folds.

Another addition to this expanded use of techniques and styles is his loosening of the restrictions concerning materials and sources. “Most of my work is lens-based, but it often incorporates other elements in the process like painting, sculpture and drawing,” he says. His message is foregrounded over any other sense of restraint, and he creates carefully in order to find the best means of communication.

However open-ended some of his ideas concerning process are, there are some topics that yield a definitive negation. When I ask him if he uses the intense juxtapositions in his work to startle his audience, he denies any preconception. Similarly, though he has a series titled Manifest Destiny and each of his Still Life photos features an animal somehow tied up or wounded, he hesitates to call his work political. “I’m trying to say things in the work, but I don’t want to hit you over the head with it,” he says. Though he does add the caveat that “all work is (probably) political on some level,” at least in an artist’s intent and practice.

A telling example of Winegar’s style can be found in his series The Rapture Of, available for viewing on his website. Each shot in the series features some form of landscape or nature scene with bright flashes of light covering some parts of the image. “Like many photographers before me, I focused my lens on the serene and picturesque,” he explains. “Unlike most of them, I was not interested in reinforcing the myth of the untouched land.” He reveals that every photo he took in some way feature humanity or human-made objects, and he used a series of multiple exposures to replace these sections of the image with the large bursts of light. The messy, often toxic relationship between human development and the planet’s natural order is dealt with in a unique fashion. Rather than exploit and showcase the unnatural additions, he fuzzes them out. “It is my hope that these specific places are transformed into more open-ended spaces that leave room for contemplation,” he says. The hand of humanity cannot be erased, but it can be co-opted for new purposes here.

Though the technology and subsequent art form is comparatively young when pitted against more historic visual art media, there’s still a fair amount of baggage attached to the label of “photographer” that Winegar questions. Outside of his Rapture Of series and its aim to question the purpose of landscape photography, he also sees some issue in approaching the medium from too rigid a standard. “I use photography, and I’m really fascinated by photography, but I’m not a purist,” he says. He goes on to distance himself from the growing culture surrounding hi-tech gear and increasingly elitist ways of treating the camera. His expressive manipulations, choice subject matter and unique approach to placement triumph over relying on technology to produce hi-res images.

For over a decade now, Winegar has taught photography at Weber State, quickly taking on the role of Program Head after his arrival in 2007. Outside of these commitments, he continues to display his work in exhibitions around the state and country. He’s currently building a new studio that he hopes to double as an “alternative exhibition space” in which other artists can display their work. While the process of bringing this space to life is inevitably filled with hang-ups and roadblocks, he hopes to open by the end of the year. In the meantime, head to joshwinegar.com to check out some of his previous work and stay up-to-date on his future projects and exhibitions. Find more of Winegar’s works in the gallery below.