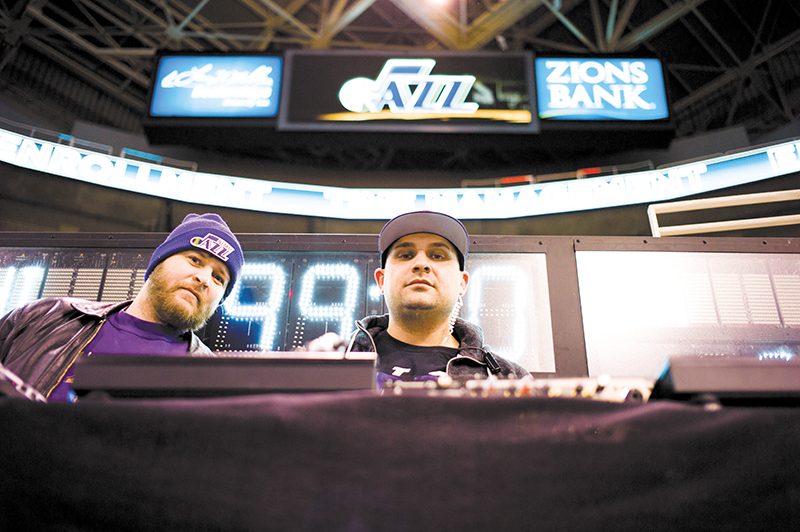 The last time I wrote about the Utah Jazz for my SLUG article was when this season started and I made like Nostradomus and spewed forth some wacky predictions for the current season. Now, we are halfway through the season, and as I am writing this, the team is exceeding many expectations, and a third of my predictions have come true so far. At this pace, all of my predictions will come true by the time the Jazz make the playoffs (thank fucking Christ). If I stay this hot, I’m going to be forced to quit my day job and dump all my precious income into sports gambling.

It’s easy to see the upgrades that the Jazz franchise has made to the actual team that puts their balls in the two holes. What’s not as easy to see, but just as important, are the upgrades that the Jazz franchise has made off the court—things like remodeling the arena, getting a high-def jumbotron, better halftime shows, shit like that. It’s important to take note of such changes, especially when it’s considered a small-market franchise, because it means that the Millers aren’t selling the team anytime soon, and that the irony of having a pro-basketball team in Utah will remain.

One of the biggest and best upgrades that they finally made this year was putting longtime local DJ and hip-hop heavy-hitter DJ Juggy behind some wheels of steel inside the arena and making him the official in-house DJ of the Utah Jazz. Naturally, I had my SLUG editor pull some strings so I could get on the court with Juggy and talk about the gig—and also take maximum advantage of the free food in the Jazz media room.

Juggy can be seen at every Jazz game, tucked atop the portal between sections A and Y, cutting tracks throughout the game. From going to Jazz games since I was 9, I can tell you—without any sort of ass-kissery or bias—that the impact of Juggy’s tunes on the live-game experience has been instantaneous and positively strong. He’s doing a lot more than just playing jock jams like “We Will Rock You” during timeouts. You will hear plenty of mainstream hip-hop cuts during the game, but Juggy has definitely been throwing a lot of underground sounds into the arena. Hearing a Dead Prez clip during a Jazz game this year almost made me drop my nachos.

Juggy’s also playing music during all the pregame warmups, which start a good two hours before every game. He mixed and edited all of the walk-on music for the pre-tipoff videos and the high-five ceremony that the Jazz team does after the national anthem and right before go time. I asked him how he got this gig, and without surprise, it’s been a while in the making.

Juggy’s been a longtime staple in Salt Lake’s hip-hop scene and has a reputation for being one of the hardest-working DJs out there. From working in numerous nightclubs over the years—some of which the local ballers would frequent—players took note, and Juggy was able to make some friends and connections: guys like CJ Miles (whom I interviewed years ago about his hip hop game), Ronnie Brewer and Deron Williams.

Williams was actually pushing the Jazz organization to make Juggy the in-house Jazz DJ. Say what you want about D-Will, but the man knows a good DJ when he hears one. Juggy has done numerous Halloween parties and random gigs for Williams and other ballers over the years, and he recently DJ’d Williams’ 10th wedding anniversary. (A 10-year marriage in the NBA is like 50 in regular-person years.)

When the Jazz got rid of Williams, they may have gotten rid of Juggy’s aspirations of jamming out for the Jazz for a while. But Juggy proved that hard work always pays off—and it doesn’t hurt to have a lucky break here or there. That particular break for Juggy was Jazz Media Day this last year.

Media Day is a big deal for basketball nerds such as myself. If you don’t know what it is, allow me to briefly explain: It takes place right before the regular season starts, and it’s when all the players and coaches introduce or reintroduce themselves to the local and national media, and they do a shit-ton of interviews all in one day. Juggy was able to secure a DJ gig through one of the Jazz’s new marketing reps, mainly by pitching to the higher-ups that decent tunes would help relax the players for interviews and just create an all-around better vibe.

And what do you know? It worked. Juggy made an impact on Media Day that carried him over to being the official in-house DJ.

The response has been awesome. Juggy let me know that Utah was one of the last arenas to have an in-house DJ, but our great state being behind a national trend is nothing new. However, we were the first NBA team to have walk-on music like they do in baseball, so there’s that.