00:00 / 16:39
Spotify Stitcher
RSS Feed
Share
Link
Embed
Imagine an artistic cocktail combining traditional and digital techniques, a dash of video games, some beautiful women in sexual situations, and the occasional popsicle. The result is the work of one-of-a-kind illustrator Keith P. Rein, whose exceptional Athens, Ga.–based studio, The P is for Penis, will be returning once again this year to the Salt Lake Tattoo Convention.

Keith P. Rein: The P is for Penis 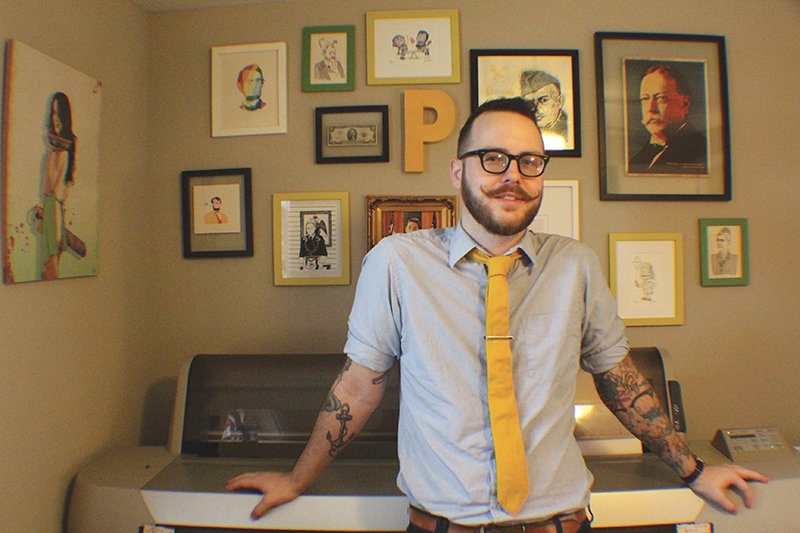 The eclectic Keith P. Rein works with a variety of mediums to execute his unique artwork. Photo: Lydia Hunt

Imagine an artistic cocktail combining traditional and digital techniques, a dash of video games, some beautiful women in sexual situations, and the occasional popsicle. The result is the work of one-of-a-kind illustrator Keith P. Rein, whose exceptional Athens, Ga.–based studio, The P is for Penis, will be returning once again this year to the Salt Lake Tattoo Convention.

Rein’s artistic life began early, inspired by his grandfather’s wood-whittling and nurtured by his parents, who signed him up for art classes as a child. He started college studying photography, both in traditional methods and digital, planting the seeds for the complex technique he employs today: setting up his own photo sessions, and then beginning several layers of illustration over the photograph. The process can be lengthy, with many sessions of drawing, scanning and printing, but the result is a distinctive blend of modern and traditional art, and an irreverent sense of humor that has made Rein successful enough to live the artist’s dream of creating full time.

During his time in college, Rein’s bold vision was already running into censorship and misunderstanding. “I was in one class working on this gender issues series, and my professor just didn’t get it at all. It was a series where I set up tropes of growing up and life, having the photographs [situated] regardless of the model’s gender—like a girl going to the bathroom with male nudie mags and masturbating. [The teacher] was just an old guy who wasn’t used to seeing men and women in other genders’ clothing,” says Rein. That experience disenchanted him from photography and moved him in a more illustrative direction, using photographs as a reference for his drawings and freelancing digital portraits for two years. After setting out on his own, Rein found freedom in incorporating his particular brand of expression that his college years simply had not supported. “Going through art school, it was a very conceptually heavy program. If you wanted to photograph pin-up girls or anything like that, it was looked down on. You had to have some artistic, art-history merit behind it. Doing illustration for me was at first like, ‘I’m going to do things that I like, that are pretty or funny or work together.’ Over the years, it grew into something more conceptually sexualized,” he says.

Sexualized work is the name of the game for one of Rein’s two studios, The P is for Penis. Rein not only illustrates traditional pin-up style, nude portraits, but expresses his unique sexual concepts in work like “Porn on the Cob,” an illustration of two women sensually sharing a buttery corn cob, or “Life’s a Picnic, Bring Your Friend,” a top-down view of what could be a woman mid-fellatio, if she was holding something other than an actual mustard-covered hot dog. There’s also video game–inspired art like “Princess Peach & the Pea,” a mash-up of a sexy Princess Peach and the traditional Princess and the Pea fairy tale, and his “Girls n’ Guns” series, featuring women and firearms. Some find the art empowering, others not so much, and the firearm series was specifically in response to those who find his art degrading. “That was a way to try and convince other people who are looking at my stuff as pornographic and degrading to women, to show I don’t feel that way at all. Woman are awesome: They’re beautiful and powerful,” says Rein.

Despite the best of intentions, such bold art can still have a hard time finding an audience. Even in a college town like Athens, Rein has found his work underappreciated. “I just had some work at a coffee shop downtown, which is known for having local art on the walls. It was up for two months, and probably nine of the pieces they ended up taking down. They weren’t even, in my opinion, too risqué. They were a few of the tamer video game–style pinups I have,” he says. Even the convention circuit has given him roadblocks. While the Salt Lake Tattoo Convention continues to be his favorite and “the most successful one” he’s had commercially, he is a frequent attendant of video game and nerd-culture conventions, whose family-friendly environments tend to frown upon the word “penis” blasted across a banner in their convention halls, leading Rein to consider alternative branding in the future to allow him to reach a wider audience. Rein’s Paper Thin Designs employs the same techniques as his other works, but for commissioned designs like family portraits and wedding invitations. Balancing the two opposing concepts gives him a creative palate-cleanser that keeps him from getting burned out as an artist.

While he sells a fair share of art online, Rein is also a big fan of taking commissions from people who love his style. “I’m working on a T-shirt right now for a company: It’s a spoof on the Kanye West song ‘Niggas In Paris,’ that will have Kanye and Jay-Z having sex with Paris Hilton. I love getting commissions through P is for Penis. Usually, those people are pretty open-minded, they’re very vocal, they’ve got fun ideas and they’re not limiting,” says Rein.

This year will be Rein’s fifth anniversary at the Salt Lake Tattoo Convention, traveling with longtime friends and clients at Pain and Wonder Tattoo out of Athens. Stop by the convention from March 22–24 at the Salt Palace and check out more of Rein’s work at thepisforpenis.com.