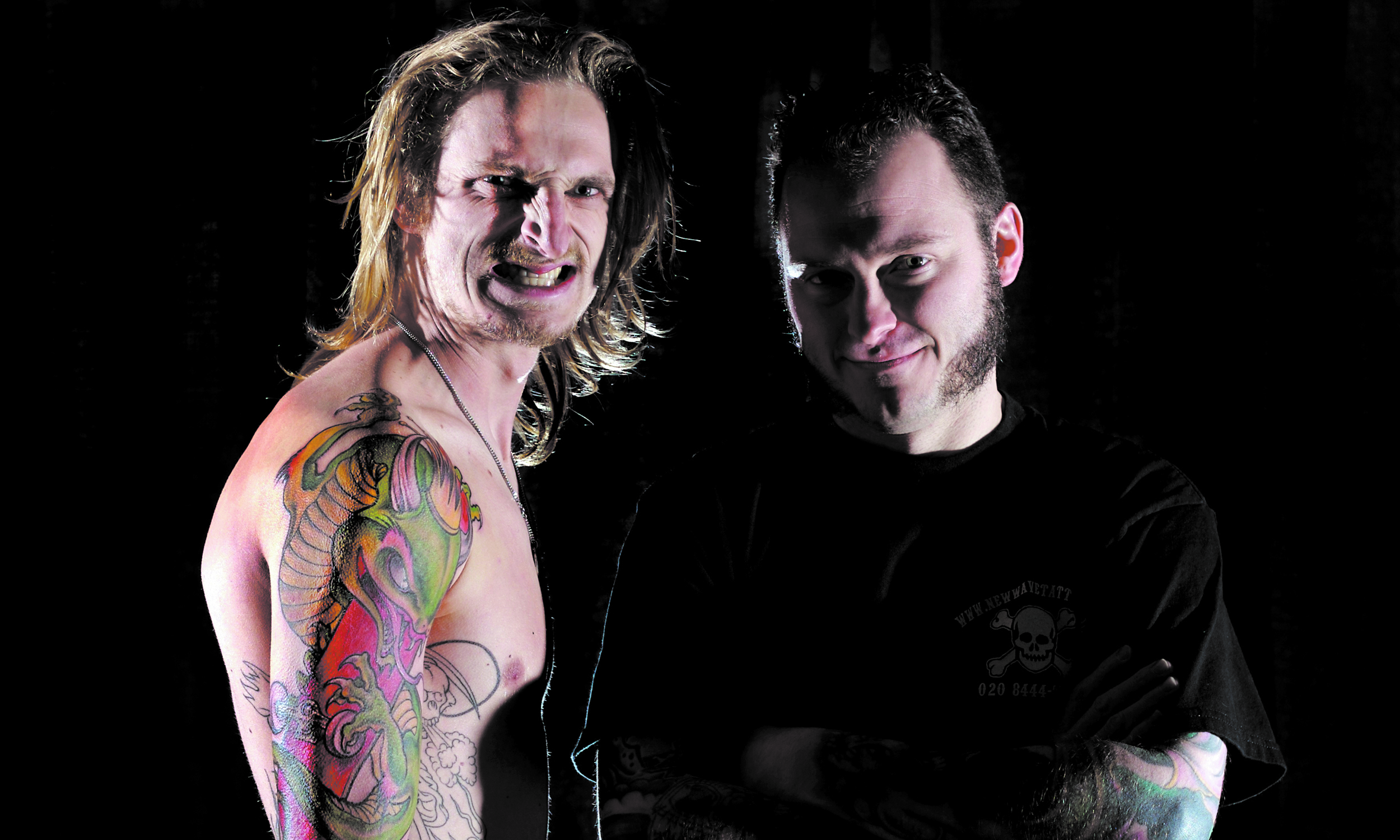 Lizard King gets tattooed by Rodney Raines at the Salt Lake Tatto Convention.

Tattoos. That part should be completely self-explanatory, unless of course you are completely brain dead. Brews. I must have drank a hundred dollars worth of these bad boys all three days of the convention. I know I sound like an alcoholic, but at least I am an alcoholic who can support all of his moocher-ass friends. No clues. These are what you have after drinking a hundred dollars worth of beer, three days straight.

Time to get serious now. This was the fourth year of the SLC Tattoo Convention, and it seems to be running as smooth as possible. C.J. Starkley, the event coordinator put a lot of time and effort into this year’s convention. I know that when most people think about a tattoo convention they envision Hell’s Angels, strippers, dirt bags and only Satan knows what else. I’m not going to say that these genres of people weren’t present, because I happened to be hanging out with some of them but the overall scene of the convention was a clean, open-minded environment. People from all walks of life (and West Valley) could be seen having a good time. You don’t have to be covered in tattoos to appreciate great artwork.

There is something for everybody to enjoy at the convention regardless of whether you’re getting inked up or not. Most people stroll through the isles checking out some of the best tattoo artwork from all over the world. There was a children’s play area for the little tikes to wear themselves out on. God, I wish I were a little kid again instead of an old drunk. Seems like skating and tattoos hold some kind of common ground due to all of the skate deck art that could be seen at many of the booths. I also smelled a certain Lizard King getting a fresh tattoo from some guy from North Carolina. Apparently this guy doesn’t seem to mind hooking up a brother with minimal cash flow. I tried to get Lizard to get his genitals pierced at one of the piercing booths but he declined, saying he would do it later when there weren’t a thousand onlookers.

The highlight of the weekend for me had to be the mechanical bull. I’ve seen Urban Cowboy a million times so I’ve always wanted to take my chances on one of these things. After drinking a pint of whiskey and a few bottles of beer, I was convinced by the lads at Lost Art to get on the thing. I knew that they just wanted me to eat shit so that they could get some cheap laughs. And that’s exactly what they got. I could only ride that bucking bronco for about ten seconds on the lowest difficulty level before being thrown to the ground. Now I know why cowboys wear tight ass Wranglers instead of loose jeans. I walked away with instant pant chaffing and bruises on the insides of my legs.

Thanks once again to Nate Drew, C.J., all of the volunteers, sponsors and workers of the event. The booths were astonishing and it was nice to see so much talent in one place. I don’t know how many other tattoo conventions are held across the nation, but I sure am glad to see one here in my own backyard. Thanks to the Salt Palace for holding the event. I should be getting out of rehab right around the same time that the Fifth Annual will be starting.