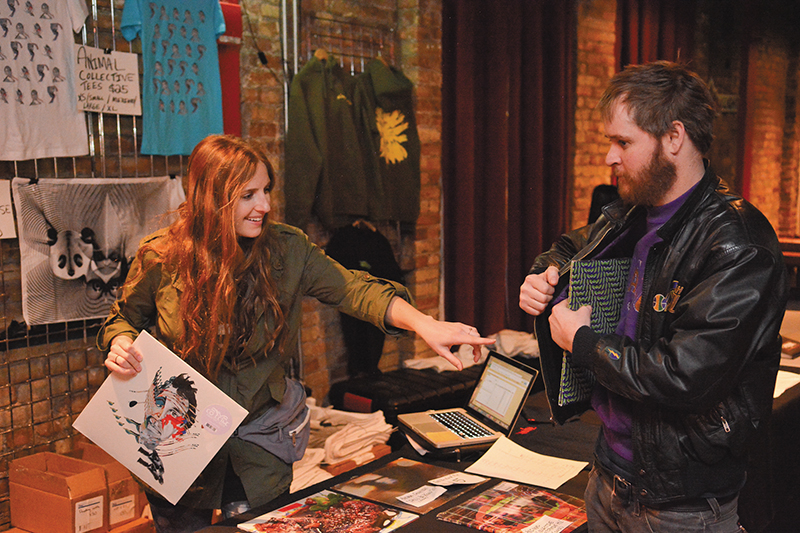 I am a connoisseur of live music, as many of our loyal SLUG readers are. You could argue that the foundation of SLUG Magazine is live music and that the plethora of talented local musicians are the jizzy glue that hold the whole rag together in some way or another. But, while the bands take the stage and rightfully hog the spotlight, there are many, many unsung heroes on the front lines of every live performance that help the show go off without a hitch. Each contributes to the event in one way or another so we, the fans, can get drunk, oogle the crotches of the lead guitarists, mosh our little hearts out, or stare at our shoes in between Instagram posts while racking up scene points.

Over the years, SLUG has spotlighted sound technicians, bartenders, show promoters and probably an after-show puke mopper, but I cannot recall us ever focusing on a seemingly instrumental and important job of any live show, and that is the merch guy—or girl in this case: I interviewed Sara Monroe, who has been behind the table for over 15 years, in order to get the lowdown on the whole merch-selling gig. I learned a thing or two, and hopefully, so will you.

Monroe currently works for S&S Presents in a handful of capacities. One of her responsibilities is running the merch booths and tables for local and touring acts. She told me that she got into her current gig by helping out local awesome band The New Transit Direction (who’ll make an awesome comeback at Crucialfest 6 this year, BTW). She helped the boys make T-shirts and took them to Vegas one time so they could play with The Used. Needless to say, they needed someone to sell the merch, and there was Sara.

There are reasons that a lot of bands can’t afford to drag along some dirt bag on a tour to sell their stuff—whether it’s not enough room on the tour bus, not wanting to have another mouth to feed, the fact that a band can sucker a roadie into running merch, or that the tour manager simply doesn’t want to change any extra diapers that they don’t need to. That’s where Monroe steps in to save the day.

But, it’s a lot more than just sitting at a table acting as the first line of defense between the band and rabid groupies. Monroe has to maintain a detailed inventory process for most bands, counting shirts and records, and make sure that none of the sketchy cronies at the show are picking up a new CD via the five-finger discount. And settling the profit with the bands at the end of the night is not just shoving cash into a garbage bag.

The buying process for merch these days can be a bit different as well. No cash? Don’t worry: Most merch booths are credit card-friendly—just like everything else we consume. According to Monroe, given the show, the numbers for merch sales surprised me. Obviously, your smaller local shows could only bring in a couple hundred bucks in sales, but some of the bigger acts Monroe has worked for, such as Robert Plant, have brought in upward of $50,000—and that’s per show.

Another interesting and important aspect of Monroe’s job is the fan interaction. Merch people oftentimes are the lone barrier between the crowd and the band. While the band is getting sauced and eating veggie trays in the green room, Monroe is the one fielding the questions and representing the performers. Like, if a groupie’s panties didn’t get thrown far enough to make it onto the stage, there’s a good chance that they would get turned in to Monroe later to deliver to the band.

This happens quite often—not so much used underwear—but Monroe told me that fans frequently drop off gifts for her to deliver to the band. They’re most often in packages and wrapped as presents. I asked her if she ever opens the presents before delivery because, in our post-9/11 world, that could be a bomb or anthrax. She says she doesn’t usually check it, but if someone blew up some of the bands that S&S books from time to time, I wouldn’t cry too much.

All in all, Monroe loves her job, and we would all be so lucky to be employed to do something we love. Getting paid to see a show is not a bad gig. Just remember at your next show that merch people are people, too. Don’t be a dick and steal buttons off the table.