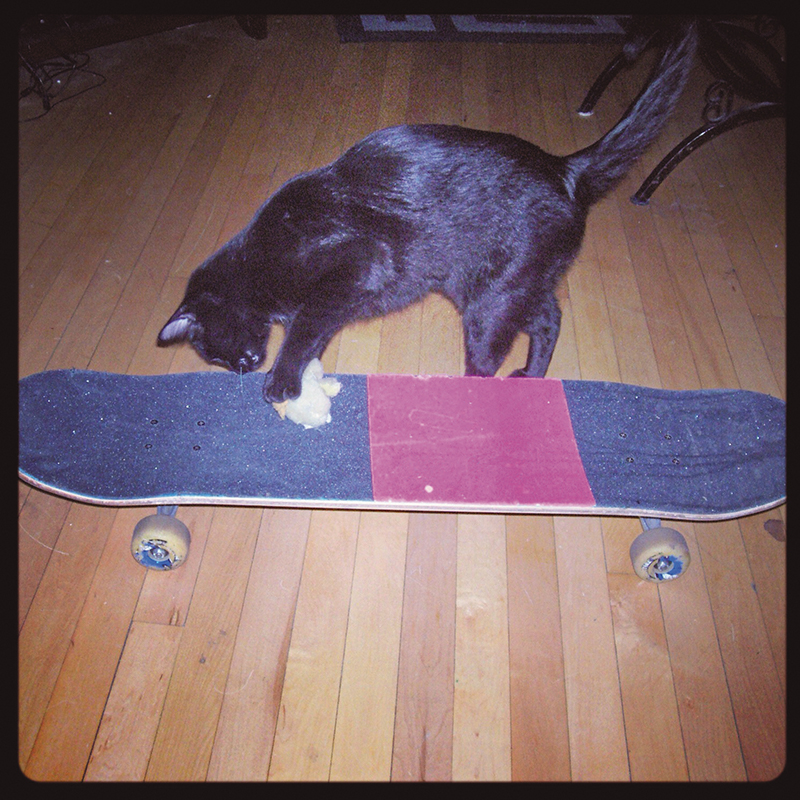 Ode to Jet Pack: The Coolest Cat Who Ever Lived

When I look around the world today—aka scroll through my Facebook feed—I get bummed out by the whole lot of humanity. Amid my social media feeds feeding me heavy helpings of mass chaos, I’ve decided that one thing is for sure: People are the reason I like animals more than people. But instead of bitching and moaning online about lost loves or posting news links about the brutal realities of a capitalistic political machine followed by comments about “FAKE NEWS!,” I decided to take my own bold action. That is, most of my social media content is just going to be totally adorable kitten footage of my newly acquired feline companion, Princess Ramona. I know it’s not exactly the Women’s March on Washington—instead of pussy hats, it’s a pussy cat.

Alas, Princess Ramona isn’t my first cat. If you have been reading my articles for a while, then all three of you know that Jet Pack was. I say “was” because he passed away over a year ago. He played more than a prominent role in my life, so it’s no surprise that he popped up in numerous illustrations and photos for my SLUG articles (Jet Pack was hella photogenic) and was even featured in a couple stories, such as the time Patty the Pet Psychic graciously read his mind.

And when he died, the SLUG editors graciously offered me an opportunity to write my next column about him, but with the wound still fresh and oozing, I just couldn’t. But as the old saying goes, “time mends all fences.” So I’m doing that now.

I first met Jet Pack when I rescued him from the Humane Society. I already had the name “Jet Pack” picked out thanks to Dan Rose, who played guitar in my old band, The Fucktards. Me and my GF at the time decided to get a cat, and when I told Dan what she wanted to name it, Dan sternly yelled at me, “Goddamnit, Mike! You don’t get an animal to give it a boring name! You name it something cool, like Jet Pack!” I was sold. Dan knew what he was talking about—he had a dog named Robocop at the time.

So there I was, at the shelter pulling cats out of their kennels one by one and asking them if they were Jet Pack. After about the sixth or seventh audition, a lanky black kitten charmingly didn’t want me to put him back in his cage. His affection wasn’t annoying or overbearing, nor was he timid. When I asked him if he was Jet Pack, he mewed, “Yes!” even though his tag said “Pickles.”

Truth be told, I never cared for cats much before Jet Pack and I became thick as thieves, but Jet Pack was no ordinary cat. Anyone who ever met him could attest to that. He’d give you awesome hugs—like, real hugs with his paws wrapped around your neck, not some cuddly-kitten bullshit. He also hated other cats with a vengeance, and would sometimes come home a little bloody from defending his turf like the bad motherfucker that he was.

The turf I speak of was my apartment I lived in for many years on 100 South and 900 East. He divided his time between sitting on my lap and locking down the entire block. There were countless times that I’d be on a beer run to the corner mart a block away, and Jet Pack would pop out of some bushes and walk me back. His wanderlust was real, but he never got lost and always knew where home was. And for several years, the block of 1st and 9th belonged to Jet Pack. He navigated the streets with the smoothness of a pimp and the cleverness of a seasoned crack dealer.

No matter the weather or season, Jet Pack would always jump out of the broken window in my apartment to take a shit. He wouldn’t use a litter box because he was a respectable, purrfect roommate, and to this day, I have no idea where he would bury his business, nor do I want to. I always waited for a call from the neighbors asking me to please restrain my cat from shitting in their flower bed, but that call never came.

While outside, he would use his kitten charisma to charm all of my neighbors, sometimes hanging out with them for a night or two, conning them into giving him extra Friskies and tuna. He was a player like that. He also never brought me dead animals as gifts to appease his master because I asked him not to—or because he was a shitty hunter for a cat.

Shortly after I moved to Rose Park, Jet Pack passed. The cause of death is unknown. He was acting fine and normal, and one day, my roommate found him dead in the basement of our semi-new abode. We wrapped Jet Pack up in his favorite blanket and gave him a proper burial in the yard. Sad as it was, he used his nine lives for nine years of my life, and we had a great run.

Hard as losing any friend can be, I have zero regrets. When you adopt a pet, people sometimes say that it’s a good thing to do because you give that animal a good life. Jet Pack taught me that those people are dipshits because it was Jet Pack who gave me a good life. Patty the Pet Psychic taught me that we don’t find our pets; they find us. And Jet Pack, if you can hear me, when you are done drinking out of that giant toilet in the sky, go ahead and puke on god for me.