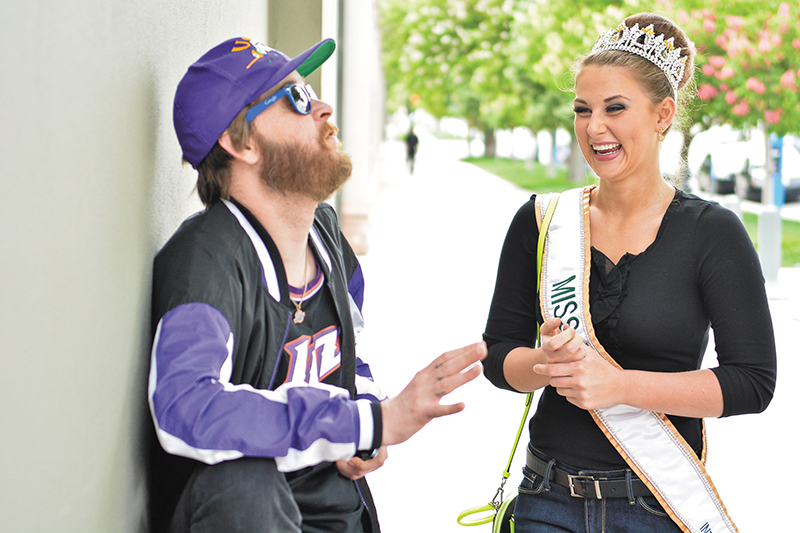 A few weeks ago, I had the distinct pleasure of interviewing the current Miss Utah. The last time I interacted with a pageant queen was when I was asked to show a former Miss Utah how to skateboard on the live morning local newscast. Needless to say, she ended up eating street on live TV after it looks like I pushed her into the shallow bowl at Guthrie Skate Park. To this day, I maintain my innocence, but if you look up “Local Skater Ruins Morning Newscast,” you can judge for yourself.

I decided to keep this interview much tamer and safer. I figured that since I was getting to interview the current Miss Utah, Rylee Coggins, I wanted to make it an interview about all things Utah. I consider myself a true Utahn, and I’m proud of this. Whenever I leave the state, I tell people that I had to shave my horns and lock my nine wives up before the Mormons would allow me to cross the state lines. It gets believed half of the time and gets me a free drink the other half.

Obviously, Miss Utah would be a true Utahn through and through as well, but I wanted to know just how Utahn Coggins is. So, I decided that we should do the interview at a quintessential Utah landmark, such as Gilgal Sculpture Garden or Temple Square. We decided on Temple Square and met up at the reflecting pond, where I told her I would be adorned head-to-toe in Utah Jazz gear. Coggins was radiant in her sash and crown.

I asked her if we could conduct the interview in my favorite part of Temple Square, the “Space Jesus Room.” Coggins politely obliged, and off we went to sit under the fake stars in front of the gigantic Space Jesus.

To keep in line with the all-Utah theme, I gave Coggins a little quiz on Utah. She was a bit nervous, but I assured her she wouldn’t lose her crown over this. First question: What is our state capital? Coggins replied Salt Lake City, passing with flying colors. I needed tougher questions. So I asked her, “What is our state bird?” Again, Coggins answered correctly: the California Seagull, and she even knew the backstory of the cricket infestation. She even knew about Lake Bonneville. Coggins was proving to be a true Utahn indeed, or proving that she paid excellent attention in a seventh grade Utah history class.

Now time for an even tougher question: What is our state tree? Coggins knew it was a Christmas tree of sorts, but not exactly sure. I gave her a pass because it’s the blue spruce pine tree, and she was super close. Then I asked her about which year Utah was declared an official state. Honestly, I forgot the answer but knew it was postponed because the early Mormon legislature liked their multiple-wives thing that was going on, so the rest of the U.S. wasn’t cool with granting us Beehivers statehood. Coggins wasn’t too sure either, so we just agreed to go ahead and say that it was 1888 or something.

I then asked some generic questions about pageantry, because I know nothing about it. I asked Coggins how she got into it. Turns out she got into it the same way I got into smoking and skateboarding—a friend turned her on to it in seventh grade. She walked me through some of the stereotypes about how pageantry is seen as degrading toward women, but explained that in her personal experience, it’s been quite the opposite—mostly because it drove her to be a better person and take care of herself. This actually made a lot of sense. Coggins said that pageantry makes for a well-rounded person—you have to know what’s going on in the world, and you have to be nice. We stopped the interview a couple of times so that Coggins could graciously pose for cell phone photos, and it was totes adorbs.

The interview was going great. Coggins was naturally charming and delightful, and then the Mormon Secret Service had to break up the fun. Apparently, media coverage of any sort on Temple Square is as forbidden as a beard at BYU. A man in a suit and earpiece politely kicked us out of the “Space Jesus Room.” So, I tried to finish the interview by a flower patch by The Temple. Apparently, this wasn’t OK either, and we were asked to leave Temple Square—yes, Miss Utah and I got kicked out of Temple Square. I thought about the irony of the situation and felt a little proud.

I wanted to finish up the interview with Miss Utah with a surprise, on-the-fly pageant-style question. As I’d recently been the victim of a cyber-bullying attack, I asked Coggins how she would prevent this issue that Dr. Phil and Oprah both agree is one of the biggest threats to the self-esteem of youth today.

I told her to pretend it was a real pageant question. Coggins remained poised, confident and articulate in her answer, and explained that we all need to take a step back from social media from time to time and that parents need to be more aware of what their children are doing with their social media. I’d dealt with my cyber bullies by simply turning off my phone, which worked.

Overall, the interview was delightful, and even though we got booted, Coggins let me wear her sash and crown. I looked damn good in it. Wish Coggins luck on becoming the next Miss International by visiting her website, ryleekier.com, or go there to learn all things pageantry.