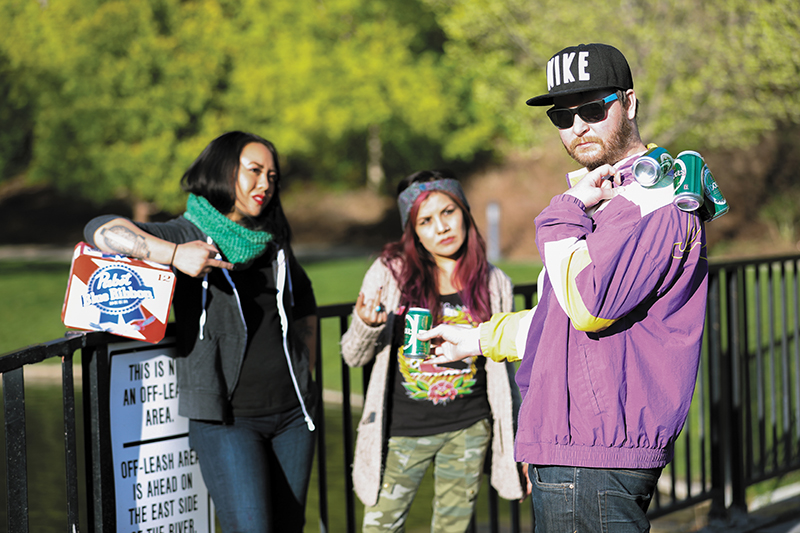 Oh, beer—that sweet, sweet nectar of the idiots. I just tried to do the math on how many beers I’ve actually drunk in my lifetime. If I assume that I’ve drunk at least two beers a day for 15 years, that equals close to 11,000 beers, which is a lowball estimate. I just factored in a two-beer average to make up for all the dead time I didn’t drink and for all the nights I ended up drinking 20. I’m not boasting about how much I’ve been toasting, just letting my readers know how much experience I have on the subject of beer.

This year, while spitballing ideas for a beer column, I realized that there was one thing that I’ve actually never done with regard to beer, and that is drink a nonalcoholic one. I thought that it would be helpful to review some sans-fun suds for the Beer Issue. I don’t quite know whom this helps, because the first thing I realized is that I know absolutely no one that drinks this shit.

That being said, a tad bit of research was in order. Seeing how much of this issue revolves around local breweries and whatnot, I asked around to see what local breweries make a nonalcoholic brew. That took about two seconds to get an answer. None of them do. This isn’t a knock against any of our fine, local beer people—after pounding my first O’Doul’s, I don’t blame any of them at all for not making one.

The closest thing I found was that Squatters makes a tasty root beer, but if I am incorrect in my research and there actually is a local brewer slanging a near-beer, feel free to write a letter to SLUG’s now-defunct complaint department, “Dear Dickheads.” In the 10-plus years I’ve spent working in bars, I’ve only worked in one that served near-beer anyway. I’ve also only seen one guy order it, and he was hella weird.

The first question I had about it was do you need an ID to buy it? I went to my local grocer and proceeded to the self-checkout where you’re guaranteed to get ID’d, and the answer is no. Basically, when the local government banned hard lemonade from the grocery store thinking kids would buy it by accident, they didn’t even consider that a 12-year-old could get through the self checkout with a fake sixer? Twelve-year-old me so would have done this.

Hopefully, there’re no 12-year-olds reading this article, NOR anyone from our local legislature, who are almost as smart as your average 12-year-old. After the last governmental session, I’m genuinely afraid that our local government would be dumb enough to waste my tax money and time sponsoring bills against near-beer. According to the label on the can of O’Doul’s I read, it actually does contain less than 0.5-percent alcohol. With some of our tentatively upcoming drinking laws, you could most likely get a DUI if you drink, like, four of them.

My next question about near-beer has to be who the fuck is actually drinking it? Surely you can’t get any at an A.A. meeting. That would be like giving a pedophile a Toys “R” Us gift card. Fake beer could probably trigger a relapse. From what I’ve observed, alcoholics who work the program only consume black coffee and cigarettes—I don’t even think that they eat food. There is some mild irony in this, though. Like, if you were the marketing director for a near-beer ad campaign, you would think Alcoholics Anonymous would be your target demographic.

What about the Mormons? They love drinking terrible-tasting shit, like Diet Coke, and criticizing others who drink yummy shit, like booze. But I wasn’t sure if this violated the hilarious Word of Wisdom that bans a cup of coffee in the morning but is totally OK with high-grade killer opiates, a Utah County doctor’s prescription pending. So I asked James Bennett, SLUG’s Highest-Ranking Mormon™, if you are in the clear with near-beer with regard to the Word of Wisdom.

Basically, all I’ve really learned about near-beer is that no one really drinks it and that it’s not really a substitute for beer, or alcoholics would constantly have one in their hand. Upon drinking my first O’Doul’s, I was able to assess why no one drinks it. And that’s because it tastes like shit. I would totally understand if nonalcoholic beers tasted like a finely crafted IPA instead of something that even Keystone Light wouldn’t put in a can. For all I know, there is a deliciously crafted nonalcoholic ale out there somewhere. But just like god and aliens, I have yet to see it.

And if it’s not a substitute for beer, then what in the actual fuck is it? That’s the real question, folks. Real beers all have several components to make them work correctly, like hops and shit. But when you take out the alcohol, you take out the three most common things in beer: taste, fun and bad decisions.