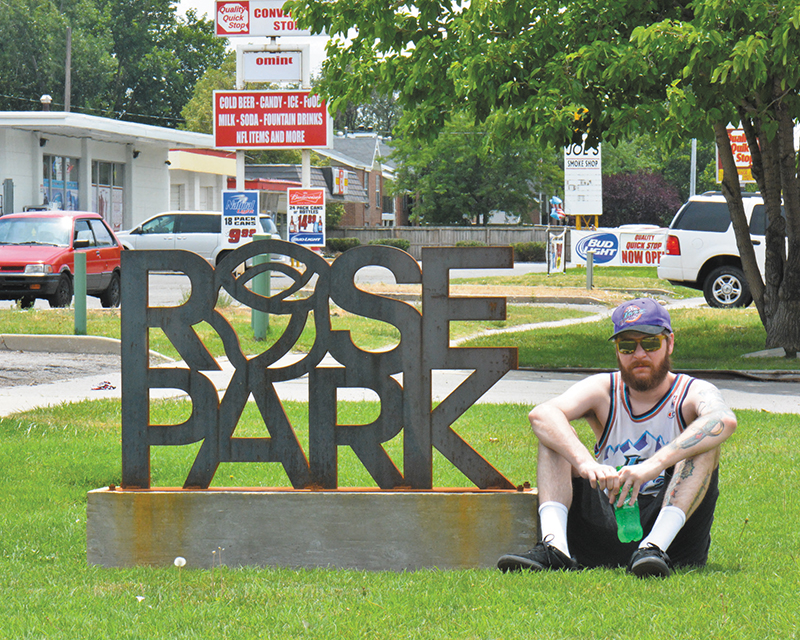 I recently moved away from the comfort and convenience of living Downtown to the Rose Park area, which is happily located north and west of Downtown. Most of my grown-up friends who aren’t total alcoholics and have managed to maintain a decent credit score and somehow pay off their student loans have bought houses out here. The neighborhood is gentrifying fast and definitely has an eclectic charm to it.

I really like it out here. It’s not like downtown Salt Lake is super noisy, but I used to live on a hospital route, and getting used to sleeping through ambulance sirens was par for the course. It’s quiet in Rose Park— all I hear are dogs a’ barking, lawns a’ mowing, and a creepy ice cream truck that passes my house several times a day.

The first things I noticed about the new neighborhood were the meth houses. Utah is known for excelling at a few things, like religious discrimination, great skiing and the awesome quality and quantity of our crystal meth. Most of the houses in the new hood are nice, but about every 10 houses, you have a dead lawn with a shitty car parked on it. Plus, there are a handful of libertarian left-wing gun-nut guys patrolling the block at night, keeping me safe, like the old guy who lives across the street from me. When the cops approach him, he’s like, “Don’t you see the flag in front of my house? I’m an American! And I have the right to swing this rifle around and protect my property!”—which is pretty awesome.

As far as my other neighbors go, right across the fence in my backyard is a tent with people living in it instead of in the house. I call them Tent People. Apparently, this is a real issue in Rose Park, and I’ve been watching them on my backyard smoke breaks for a bit now, and they are clearly living there. I realized this for sure when I noticed that they were watching Netflix in their tent the other night. That’s not camping at all.

The Tent People living in my neighbor’s yard also have a couple of pit bulls, which is definitely the dog of choice in Rose Bark. Personally, I hate pit bulls—not because of the breed (I know they always say blame the owners, not the breed, when it comes to pit bulls being violent and stupid). I hate most people that own pit bulls, so it’s no surprise to me that the Tent People have a couple. Maybe they are just practicing for Burning Man or something. Either way, I’m just glad that they haven’t come over to my new place with a fruit basket, introducing themselves as my new neighbors … who live in a tent … and watch Netflix. I’ll be interested to see what they do come winter.

One thing I got way too comfortable with by living right Downtown was the abundance of coffee shops. The problem is that there is seriously nowhere in the new hood to get a decent iced Americano. On the bright side, with all the money I’m saving by not hitting a drive-thru coffee shop every day, I’ll have enough dough to buy a pony at the end of the summer. However, there is a little market close to the house— their coffee is shitty, but I’ll take what I can get.

I call it the Quickie Mart because the place doesn’t seem to really have a name. They sell your basic grocery necessities and crack pipes. It’s like a 7-Eleven with a shitty head shop attached to it. Obviously, I love going there. The people-watching in the place is amazing. I once saw a tweaker trying to return his used meth pipe, claiming it didn’t get him high enough. You can’t pay enough for that kind of entertainment while standing in line, buying some cheap beer and a bag of chips. My roommate hates the Quickie Mart, though, because one time the clerk tried to sell him some of those knockoff Viagra boner pills.

After several trips to the Quickie Mart, I realized I probably should figure out what the neutral gang colors are in my new neighborhood. I would hate to get accidentally capped for claiming the wrong set unintentionally. I put out a Facebook post asking if any of my Rose Park friends knew what I should be wearing. The best comment was rose pink. Other suggestions were to wear red and blue at the same time, a soft salmon color—or a Lakers jersey, which would never happen. I’ve opted for all Utah Jazz gear to keep me safe, which is pretty much what I wear all the time anyway.

Despite the lack of coffee or bars within walking distance, I like it here. The neighbors are nice, there’s a bike trail that leads straight to a liquor store by my house, and the tacos are phenomenal. All I have to do is keep an eye on the Tent People, and it’s all good in the hood.