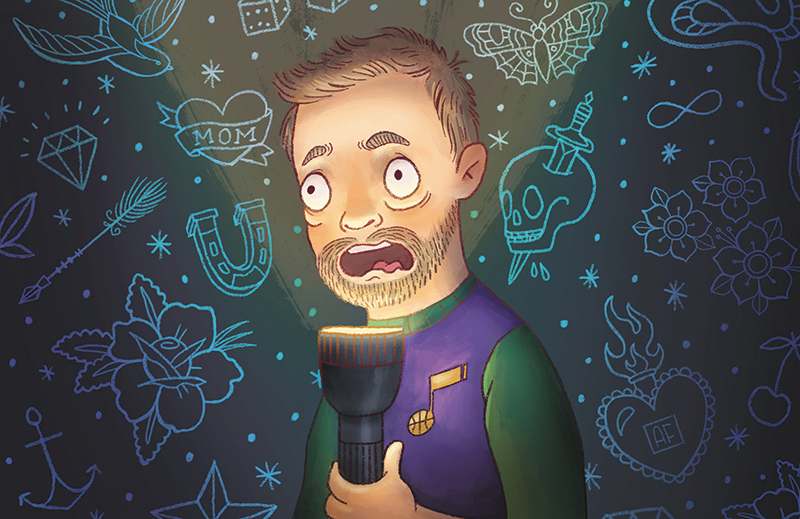 The following is a simple guide to some shit that should already be a given but somehow always isn’t. It’s some do’s and don’ts from some tattoo artists’ perspectives about how a customer should behave when going in to get drilled—whether it’s your first tattoo or that 50th one that’s gonna get you kicked out of the will—based on real-life tattoo horror stories. I interviewed a couple tattoo artists anonymously, similar to the support groups they meet up with after work, to get some feedback from their end. The names of the shops have been protected, too, so they could talk a little trash.

First: A guy walks into a shop to get his first tattoo ever. The artist asks him the standard “what he wants,” and he wants a ring tattoo on his finger with his significant other’s name going across the finger. As the artist starts the tattoo, he casually asks his client how long they have been married. The client tells him, “Well this might sound crazy, but I’m not married.” The artist is thinking, “Whatever, a lot of people are together these days and don’t get married.” But then the client says, “So, have you ever heard of Tinder?” Turns out the guy had met some girl on Tinder, the classic app that defines the swipe-right generation, two fucking weeks ago. The client then went into detail about their first and possibly one-and-only Tinder date. He matched with a girl from Rexburg, Idaho, arguably the most Mormon-y city outside of Utah County. The girl somehow came down from Rexburg for the awkward phone date.

Now, the details of the date are unknown, given the fact that the artist is a bit creeped out at this point, so he didn’t ask if they banged out or not. But he did ask the client, out of obligation, if his Tinder date knew he was doing this. The client starts to stutter as the artist looks him dead in the eye and says, “It’s a surprise, but a good surprise, right?” The client explained how he had never felt this way about someone before and blah, blah, blah, but needless to say the rest of the session was pretty creepy. So to future tattoo customers, maybe explain a little more why you want what you want to your artist. It might not always be a good idea, and if anyone could talk you out of a bad tattoo, it’s your artist.

Next: Bad hygiene. An artist is taking on a client who wants a tattoo on his butt. OK, I think you guys know where this is going. Though a lot of tattoo artists look like scumbags and deadbeats, they do take the cleanliness and sanitization of their workspace very seriously, and so should you. And they will always be professional about tattooing someone’s butt.

Without getting into too many gross details, the artist literally had to stop tattooing the man and asked him to go home and shower, letting him know that he couldn’t possibly work under such shitty conditions. But my favorite part of this quick little story is that the artist required another deposit before the man left, thinking that maybe this guy is just so gross he doesn’t know how to shower. The man actually came back clean and fresh, and the tattoo was finished. But when I asked the artist if he could see the actual source of the bad hygiene, the answer was a frightening yes. So, yeah, basically, if you are going in for a tattoo appointment, take a shower first and wear some goddamn deodorant.