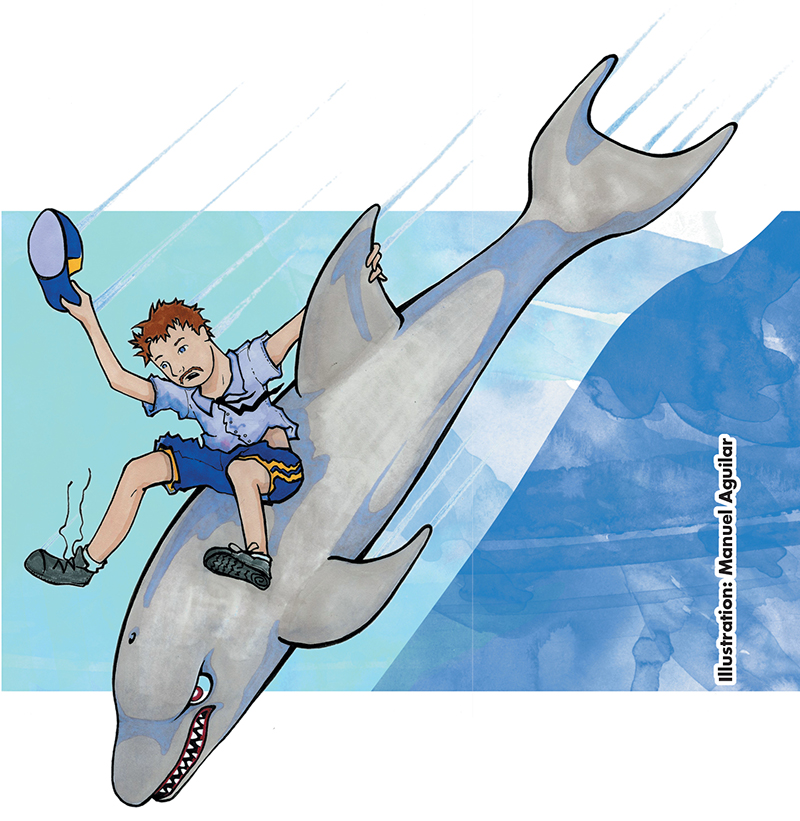 Sometimes an interview can be as riveting as humping a dolphin ... sometimes not so much.

Over the years of having the privilege and headache of writing for SLUG, I have conducted several interviews. It’s always an interesting process. It’s not like writing an opinion piece where I just get to talk some shit for 900 words about whatever I want. With an interview, you never know what you are going to get or really how it’s going to turn out. That’s why I sometimes hate writing them—trying to capture the moment of a great conversation can be challenging. But yeah, I stumbled across a man who made love to a dolphin and wrote a book about it. I thought it would make for a great interview. You would think that someone who got it on with a dolphin would have more pizzazz, though.

Let me just preface this article by saying how boring this interview was, which isn’t a personal knock on the guy who humped a dolphin—we all aren’t as gifted at the art of human-to-human-to-dolphin conversation. I consider myself a great conversationalist, a skill that social media is killing slowly but I still consider valuable. The best interviews I’ve done have been out of the blue or the most unexpected, for sure. Like, who would have thought that Violent J from ICP—the man responsible for making some of the most potent ear poison known to man and who unknowingly started a culture of poop-throwing soda pop addicts—would have made for such a captivating and interesting interview? But he did. So imagine my excitement when I came across the opportunity to interview a guy who boned a dolphin.

The book is called Wet Goddess: Recollections of a Dolphin Lover, written by Malcolm J. Brenner, the guy who the Sundance movie Dolphin Lover is about. It’s an allegedly true story of Brenner working in a water park, falling in love with a dolphin and eventually having sex with it. The book reads like a romance novel with Fabio on the cover and is loaded with pictures that could prove that a consensual sexual relationship between a man and a dolphin is more than possible.

But I had my suspicions about this topic and about Brenner as well. He was very calm and humble over the phone, and the main message he conveyed was how important and special dolphins and all marine life in general are, but I couldn’t help but wonder, “If you really fucked a dolphin, why tell people?” I’m sure that if everyone that we all knew were actually honest with each other, we would find out that some of our friends have fucked some really weird shit. Like my friend from high school, Josh, who used to microwave grapefruits, and, well, you know.

Sometimes an interview can be as riveting as humping a dolphin … sometimes not so much.

I grew more suspicious when I heard that he was on The Howard Stern Show, so I found the interview on YouTube and listened to it. And it didn’t sound like the same voice I was talking to. I also wasn’t taking the Howard Stern angle of making fun of Brenner for a half hour. That would be too easy. And so what if a guy is a dolphin lover? It doesn’t have that much impact on my life. I really wanted to know the intentions behind the whole thing.

My first gut instinct was that this whole “I humped a dolphin” thing was maybe just an elaborate prank and a ploy to sell books. So my first question for Brenner had nothing to do with dolphins—I wanted to know how book sales were. We could get to the dolphin stuff later. Turns out book sales are OK, but with the state of print media, they aren’t as high as he would like.

I’m assuming, at this point, that you are curious as to how someone eventually has sex with a dolphin. The CliffsNotes version of the book is that Brenner was in his early 20s—also keep in mind this is the ’70s and in Florida (so I’m sure it was totally legal in Texas, too)—and he was working in a Sea World–like marina. He met a dolphin named

Dolly, whom he claimed courted him, fell in love, and then humped it, consensually.

Then Dolly the dolphin got transferred to another waterpark and eventually died, thus making Brenner very sad. So I asked him about love, and “If you really loved this creature, why would you want to write a book about it? And why would you go on The Howard Stern Show and sacrifice yourself like that? True love wouldn’t care about book sales.” He explained that he mostly wanted people to know how shitty life is for captive dolphins and other marine life, and of course, we talked about the movie Blackfish, the one about the killer whales. Maybe, if someone would have fucked that whale good enough, it wouldn’t have killed its trainers.

After doing this interview over the phone and reading his book, I really don’t know if Brenner humped a dolphin or not. I’m not saying he didn’t—I’m just saying that I wasn’t there, so I don’t know. I did respect his environmental perspective of how shitty captive marine life is treated. We also talked about aliens and how important LSD trips can be. So maybe it wasn’t such a bad interview after all.