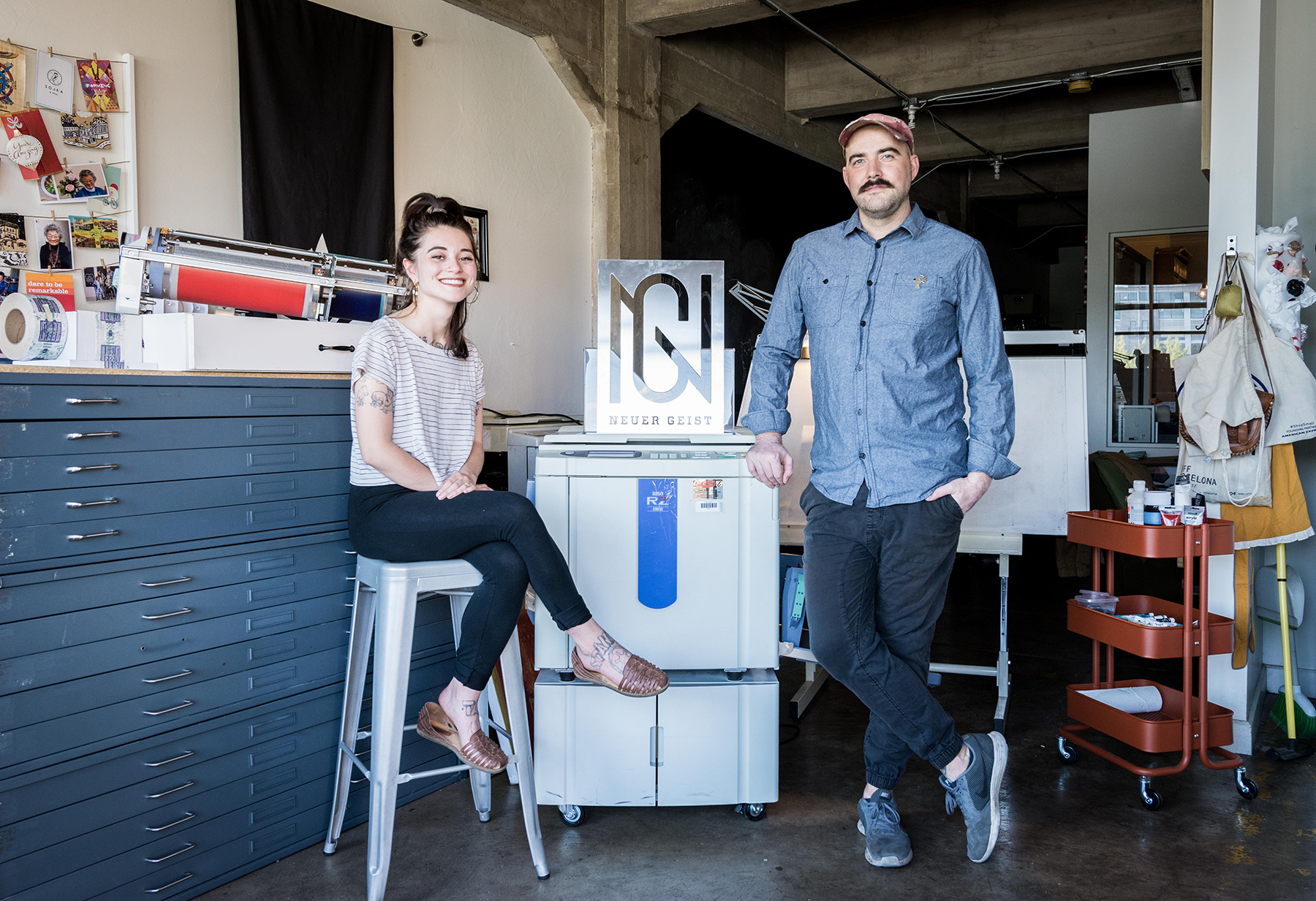 Since 2015, Neuer Geist has been creating and designing images and products that reflect their own brand aesthetic. And in addition to that, they help other businesses grow and form their own. Through screen-printing, watercolor, graphic design and the newly introduced techniques from highly coveted risograph machines, Brighton Ballard and Derek Ballard offer an array of services that can refresh any business’ look and create an impression on the community. By combining their two entities—Derek’s consisting of dark, industrial aesthetics and a background in design, and Brighton’s comprising watercolor, line drawing and portraiture—the two maintain their signature look as Neuer Geist.

Neuer Geist in itself means “breathing new life into existing walls,” literally translated as “new spirit.” It encompasses the intention of the team: rebranding and reworking. However, in recent years, they’ve been adding more to the Neuer Geist portfolio. While the majority of their work revolves around their clients, over time, the Ballards have started creating their own artwork and hosting their own art shows under the Neuer Geist brand. They find inspiration in artistic movements and sensibilities from another time and often feel that their art reflects a bygone era. “I’m influenced by Eastern European aesthetics and constructivism as a movement,” Derek says, “the lines, angles and the awareness to alignment in space as well as the grittiness of textures and overlays. As far as typefaces, I tend to lean towards mechanical, clean san-serifs, but I do really like black-letter or fractured typefaces.” Brighton’s influences shine through in the illustrative and photo-realistic aspects of Neuer Geist. “When we can make a poster that has some elements that are more photo-realistic or illustrative and bring it together with the more geometric is really when both of our backgrounds come together,” she says.

Recently, the duo has introduced five risograph machines to their toolbox, marking the next phase of Neuer Geist’s creative process. “A risograph is a type of printer. It’s basically a Xerox machine in structure and interface,” Brighton says, “but instead of using CMYK or inkjet, it uses a drum and soy-based ink.” Printers have thermal exhaust and uses chemicals, while the risograph works similarly to traditional screen-printing. “It pushes the ink through a thermal screen, creating a master, which then wraps around the drum,” Derek says. “Then the ink is pressed out of the drum, through the master stencil and then onto the paper. Then it just shoots them out. We can print thousands of copies in a few minutes. ” It works color by color, so the color-drum would have to be changed in between batches. “They were formulated with office use in mind, but artists were like, ‘I could print two colors if I just put in a new drum!’” While they may not be as easy on the eyes as other printers, the couple sees them in a charming light. “The finished product, with the soy-based ink, it smells, looks and feels like a graphic novel,” Brighton says. “They do half-tones really well, so it’s perfect for merging photos, watercolor, traditional design and graphic design. For us, we feel like it’s perfect.” Brighton says.

With any medium, their design process is described as “very standard.” For Derek, it involves a lot of research and immersing himself in a project. He’ll sketch his idea, Brighton will watercolor over it, and then Derek will scan it into his computer to develop the piece further digitally. “As I’ve become a more efficient designer, it’s given me more time to research and think about it,” Derek says. “If I’m doing a branding project and they have a certain name, I want to look at it at every angle to make sure I find every detail that will make it stand out. Even if I’m designing a Wes Anderson film poster, I’ll watch the movie again and again because I don’t want to miss anything.”

Neuer Geist’s clientele have spanned across North America, their most recent being Tod Mountain Cafe and their sister company, Twisted Goat Coffee Roasters in British Columbia, where they did a full rebrand for the cafe and complete collateral for Twisted Goat. This included fresh branding, packaging, merchandise and anything a new business would need. “Mostly, what we do for every client is the unseen strategy creation,” Brighton says. “So often, even if someone wants a logo, it rarely ends at us designing a logo. We think about how they can use them on social media or a business card. There’s that unspoken element of decision-making.” While clients usually find Neuer Geist on the premise of designing a logo, they find that they usually end up helping businesses with a lot more, like copywriting or production. “A big one is production,” Brighton says. “Because we have so much experience with connections and figuring out how to make products and packaging, we can do consulting, even if that isn’t what the client had originally come to us for.”

This year, they’ve worked alongside The Office Hero, Cafe Mugshot and Raw Iron Coffee. “We’re about to start working with the Utah Film Center Artist Foundry and their branch-off brand, Avrec Art House,” Brighton says. “In that sense, we’ll be doing their marketing materials but also looking at how we can best help them in refreshing their existing brand while also creating a new one.” The goal for Derek and Brighton, still, is to help small businesses elevate themselves affordably, with minimal stress and without compromising quality.

To contract Neuer Geist’s services, their website is a great place to start: neuergeist.com. They’re open for direct messages via facebook.com/neuergeiststudio as well.