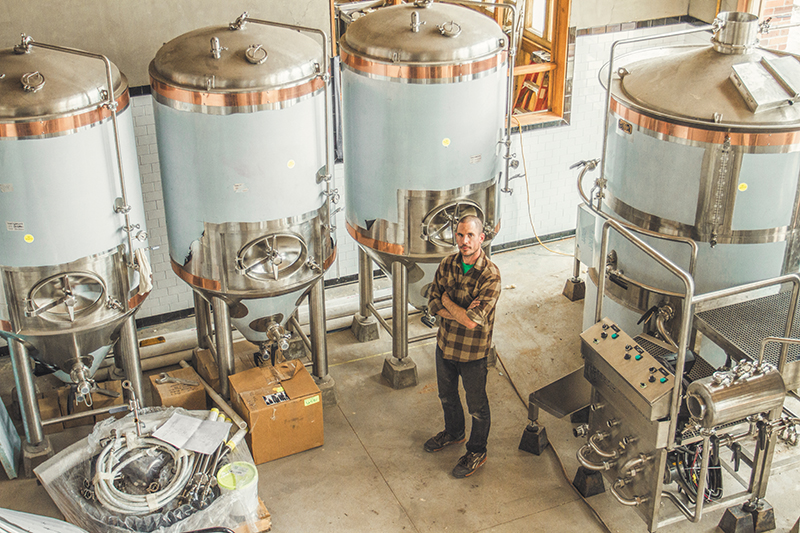 Our journey to Strap Tank Brewing Company begins in a place that many might consider to be a beer wasteland (even by Utah standards). It’s a place that hasn’t seen a brewery since before Prohibition: Utah County—specifically, the city of Springville. Here, in this most unlikely place, not only is a brewpub rising from the “virgin” soil, but also a stunning, beautiful monument to a bygone era that would make any nonbeer-lover proud.

“The building itself commands a presence, to say the least,” says Head Brewer Michael Dymowski. “Our owner, Rick Salisbury, has been building homes his whole life, and he’s put all of that experience into the most beautiful brewery I’ve ever seen.” Dymowski isn’t exaggerating either—this place is a scaled-down replica of Harley Davidson’s original motorcycle factory, meticulous in its details.

After the visual overload from the building faded, “Why now?” came to mind. “Rick has been a Springville guy all of his life,” says Dymowski. “He loves beer and wants to share and educate the people of his hometown on craft beer. Besides, people are more open to these things now in Springville.”

People often bring the things dearest to them close to home, and it makes sense for Salisbury to open up shop in Springville. It’s a whole other story when you uproot your family from Austin, Texas, to an unproven market in unfamiliar territory, as Dymowski has. “I’m not shy of challenges,” Dymowski says. “I’ve never had the opportunity to create a portfolio of beers from scratch. That was appealing. Plus, the area we’ve chosen to live in and work is one of the most stunning places I could imagine.”

Utah County is beautiful, but upsetting the order of a place rooted in tradition can produce its own challenges in a community that may not be ready for change. However, “All of my interactions with people have been positive,” Dymowski says. “Mostly, they just nod their heads and say, ‘Interesting.’”

Dymowski will bring four core beers to Strap Tank on June 11: a dry Irish stout, session IPA, California common and a good, classic American lager—plus two rotating seasonal beers. “I’ve been brewing since I was 15 and come from a family of homebrewers,” he says. “My family raised me to think, ‘Taste before intoxicant.’ I’m eager to spread that message here.”