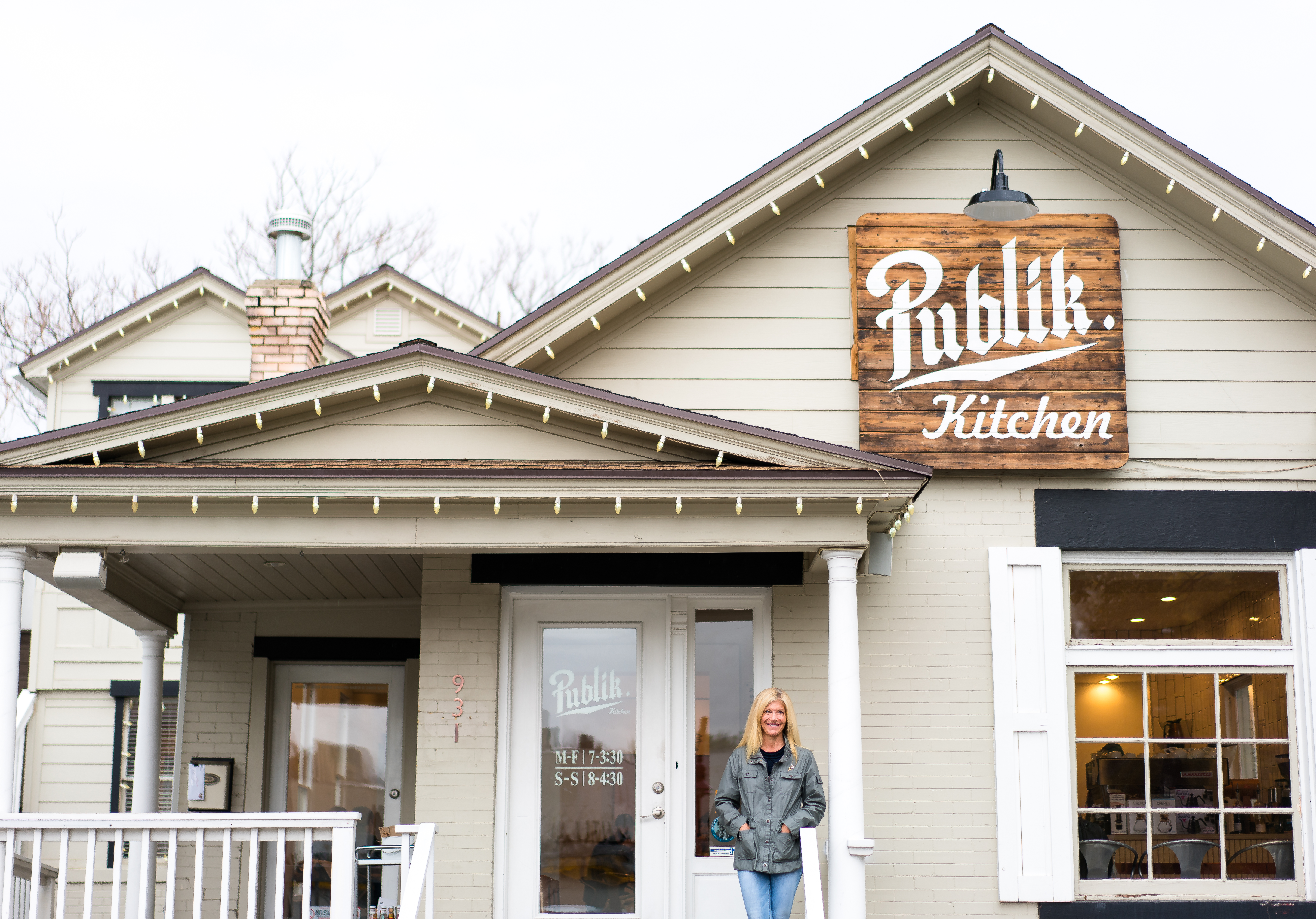 It’s the forward-thinking food trend of the century to be locally run, selling organic products in a way that minimizes environmental footprints, creating spaces to foster discussion on how to make our lives better or just to make sense of it in the first place. At least, that’s what the two women next to me were doing as they talked about whether or not their upbringing had ruined the idea of marriage for them. It was what the group of seven or so software developers were doing a little farther down as they talked about the marketing techniques of the new app they were developing. With the successes of roasting rising up behind them, Publik Coffee Roasters has recently opened up two new locations—both within a month of each other. And as I sat at the new Publik Kitchen in the 9th and 9th area, eating an amazing, syrup-drenched, mocha French toast, I could feel this presence of motion—of ideas, as much as utensils, putting feet to the pavement.

Just as I finish eating, Missy Greis, the owner of Publik Coffee Roasters and the woman responsible for creating these particular hubs of Salt Lake society, peeks her head around the corner in an energetic hello. She’s wide-eyed and grounded with this sense of prescience you don’t find in everyone. We sit, and when I comment on the atmosphere surrounding us, she begins to tell me about what Publik means to her. It’s fascinating to hear her describe the spaces she creates as being “light and up and bright and inspiring, comfortable,” which seem like natural extensions of her personality. She also points out their business motto (Quality over Quantity, Community over Corporate, Planet over Profit) as pretty succinctly outlining their intentions.

The part of their motto that most garnered my curiosity was the “Planet over Profit” stance. When I asked what exactly that meant, she started to tell me about the different ways she has put her values of health on a societal level into the way she does business on a personal level. From the beginning, the roastery on West Temple has been powered exclusively by 65 onsite solar panels, which have enough power to provide for the entire building’s energy consumption on top of what is used to actually roast the beans. The company uses compostable paper, composts all of their grounds, recycles glass (something you have to pay to do) and portions the food at Publik Kitchen so as to produce as little food waste as possible. Not only that: Publik is the only coffee business in Salt Lake and one of only two in the state of Utah that has an afterburner. It’s a heavy investment in a heavy machine that takes 96 percent of the emissions made from roasting and filters them out to remove any and all smoke emissions, which would otherwise have just been released into the air.

It’s this kind of active participation in the growth of the company that has led Publik to become a household name in Salt Lake City. It’s unusual to meet someone who lives here who hasn’t been to any of their locations at least once, and the success continues to show. Up until the beginning of this year, the roastery on West Temple, previously a designated community meeting spot, was the central and only place to hold the Publik name. Publik Kitchen opened up in January of 2016 and sits comfortably in the 9th and 9th district, adding an unassuming persona of good food in a growing locale. Not to be left behind, Publik Avenues, a more minimalist neighborhood café, opened in February.

The Kitchen is Publik’s first foray into a full menu. While they had toast at the West Temple location, there was never actually a kitchen. Head Chef Alicia Pacheco has crafted a classic American brunch menu with enough going on to let your taste buds swing circles across your palate. From crème fraîche–slathered hash to house-made granola—which is actually set to be distributed by Winder Farms in Las Vegas, Orange County and across the Salt Lake Valley—visitors will have plenty to choose from. The Avenues location, in contrast, is somewhat flashy, as cozy as it is, and it’s a chic addition to an already chic neighborhood. Publik Avenues focuses on drinks and is a great place to try the upcoming lineup of specialty winter beverages.

“[I] had this idea, though, of maybe getting a local artist to do an outdoor garden installation,” says Greis, referring to the side yard of the Avenues. She seems excited about the ability to tinker with the new locations. You get the sense that she’s doing exactly what she wants to be doing with her business, and that no one is stepping in to hold her back—only to help push her vision forward. When I asked her who the players in the Publik game were, who was right up there at the front pushing the bar upward with her, she just laughed and, without a second thought, smiled and confessed, “I think that everybody that works for me is awesome.” And she meant it. For more info on what’s to come, visit publikcoffee.com.