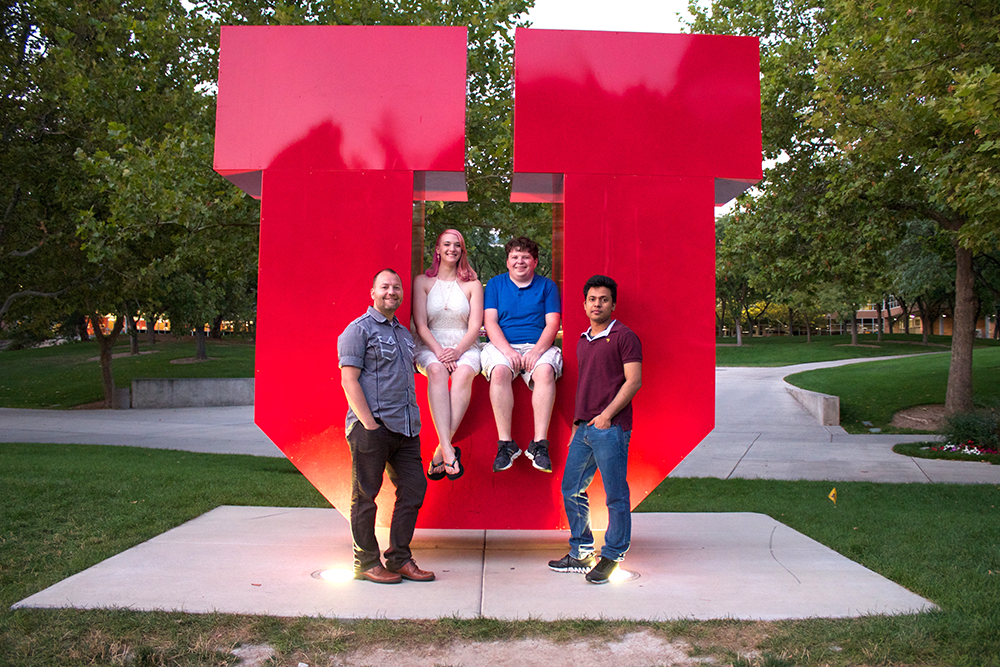 There’s plenty going on in the gaming industry right here in our backyard, and we need to start feeding those flames by supporting local game creators. Many of them get their start at the University of Utah, mostly in the Entertainment Arts and Engineering (EAE) program. One such group of students has started a small gaming studio called Random Breakfast, and their first game, StepPets, hit the app store on Dec. 1.

StepPets is a side-scroller that involves ador able little animals fighting against an evil asteroid named Jacques. The asteroids constantly get in your way as you run through your levels—you have to smash and jump your way around them. They’ve also integrated with your health app to track your steps, and builds the levels based on what you’ve walked for the day. E.g., if you walk up a lot of hills, that’s what you’re going to find in your levels. The game rewards you with coins every time you hit your step goals that you can use to buy new pets and themes. Random Breakfast has four members: Tim Cooley (CEO), Binoy Mohanty (Engineer), Topher Nadauld (Producer) and SLUG illustrator Eleora Nelson (Creative Director). Cooley, Mohanty and Nadauld were on the project from the beginning, and Nelson joined just a few months later. It all started with Cooley and his passion for fitness and wanting to do something different with it. He went to his buddies Mohanty and Nadauld to hash out some ideas for a game that eventually evolved into the current incarnation.

When Random Breakfast first started on their game in July of 2014, the idea was to walk a virtual animal, similar to the Tamagotchi craze back in the day. The idea morphed to the side-scroller when they took the game to their advisor. He posed a very important question to the team, “Why would I do this?” The team came back together to figure out not just how to make someone come back, but how to make the game fun. Random Breakfast decided on a side-scroller with one touch mechanics. First things first with any venture—funding. Random Breakfast got a total of $15,000 from programs like Bench2Bedside, Get Seeded and Games4Health. In the Bench2Bedside competition in May of 2015, Random Breakfast caught the eye of Zions Bank, specifically Scott Anderson and Mike Winder. They loved StepPets so much, they gave the team a grant of $20,000, which became the main source of funding for the game. Nelson says, “It was more like the idea that they wanted to fund. At the time, we didn’t have health integration, and it was just a jumper.”

Most places don’t just give out money for nothing—Get Seeded wanted a plan; Bench2Bedside wanted to see what you could do with $500; and Games4Health was a competition that Random Breakfast took second in. Random Breakfast also competed in Bench2Bedside and won another $500 from there, but they didn’t win that competition. Zions Bank’s money was definitely their ship coming in, though. Nelson says, “When we got the 20,000 dollars from Zions, it was just straight-up money,” she says. “We still ended up winning.” Twenty thousand dollars sounds like a lot of money—and it is, to the average person. To a four-person company however, it’s barely enough. There are salaries to distribute, taxes to pay, rent on a space and all sorts of incidentals. Cooley managed to stretch that money for a respectable seven months, but he still looked into crowdfunding, although the company ultimately decided against that route. Cooley says, “It’s really challenging, especially in games. A lot of people don’t end up actually giving the money anyway. Some people we spoke to didn’t even get 50 percent of what people pledged.” Once Random Breakfast finally got that major chunk of funding from Zions Bank, it was time to really sit down and get the final version of the game built. Once everyone could sit down together and talk, it changed so fast,” Cooley says. “It was amazing.”

One of the big complaints about working for the gaming industry is the long hours and ridiculous time crunch that happens right before shipping. Just because Random Breakfast is small doesn’t mean it’s immune to those pressures. Random Breakfast felt like they had to ship by October so they would have enough funding, but they couldn’t get the game ready in time and pushed their soft release back a month. They experienced a time crunch right before the game’s soft release. It was a learning experience. “We actively tried to avoid it,” says Cooley. “It got to be in a place where the game suffered and we suffered. We’ve been pretty good since—it helped us manage time and expectations better. I hope we never have to do that again.” Nelson also added, “It’s not healthy for your body or your mindset about your game. Before that we thought our game was fun and we loved working on it. That night, everyone hated it. We didn’t think we should feel this way about our project.” It all worked out in the end. Random Breakfast launched on the iOS on Dec. 1, and their numbers are slowly ticking up, for good reason. The game is fun and quirky, and the pets are adorable. Nelson did a great job with the animation and the art style. It’s a great game to pass the time, and it actually made me want to walk more to hit my goals to get coins to unlock new pets and levels.

Random Breakfast are working on their Android version and constantly improving on their current iOS version. These guys are a perfect example as to why Utah is becoming a breeding ground for game developers. Nelson says, “It’s cheaper to employ people cheaper to produce games, as well as just be in a space. We have a lot of successful gaming companies. We also have these UDEN (Utah digital entertainment network) meetings. I learn so much, and it’s really cool that they’re trying to promote the networking and the digital production and make it more of a valuable investment to hire out of Utah and make companies here. I think it’s on the way.”