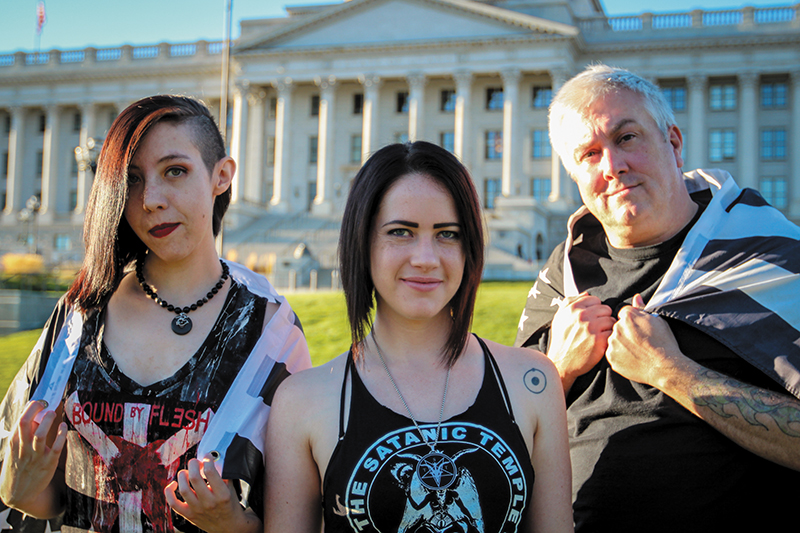 Devils Among Us: The Satanic Temple in the Beehive State

“I personally have received death threats, rape threats,” says Chalice Blythe, chapter head of The Satanic Temple’s (TST) Utah chapter. “There are people that take issue with the fact that I exist and am a Satanist.” It’s not easy being a Satanist anywhere, especially in the land of milk and honey, Utah.

In the dark, cool, brick-walled basement of The Beerhive, I’m sitting with true Satanists: Blythe, Aaron Shea and Autumn Rogers. Yet, this isn’t Rosemary’s Baby: The grins aren’t sinister, the laughter is kind and the horns are seemingly nowhere to be found. “I’m a software developer,” Rogers, a TST council member, says. “I’m building a modular synthesizer and a customized MIDI controller, and I play in three bands,” including Rogers’ solo project, 80KV. “I’m a former chef, now a line cook,” Shea, also a TST council member, says. “I’ve been a professional DJ for 20 years, [spinning as] DJ Reverend 23.” Though Blythe declines to state her profession, it is clear that she is an individual of vision and determination. This is a Satanism like I’ve never seen before: modern, receptive, down to earth.

The Satanic Temple is a non-theistic, non-supernatural religious organization founded by Lucien Greaves and Malcolm Jarry. According to Blythe, TST began its first demonic stirrings in 2012 and officially established itself by 2014. During this time, TST formed chapters throughout the United States and Europe, standing out as a unique Satanic institution both in philosophy and practice. “[The Church of Satan (COS)] comes up a lot, because that is what people think of when they think of Satanism,” Blythe explains. But the differences between TST and COS, established in 1966, are striking. “The obvious difference is The Satanic Bible by Anton LaVey [COS’s canonical text],” Shea says. “When you read it, it has a tendency to fade in and out of theism and atheism, while promoting and denying the supernatural.”

Instead of basing their religious system on the works of a prophet-like figure like LaVey, TST aligns their guiding principles to the personal qualities of the literary Satan, featured in Anatole France’s Revolt of the Angels and John Milton’s Paradise Lost. This Satan is a character that exudes self-worth, wisdom and an inalienable sense of justice, points that are furthered in Greaves and Jarry’s Seven Tenets, which illustrate the importance of empathy, compassion and personal sovereignty, among other things. “To me, TST’s definition of Satanism is fairness, treating everyone fairly,” Shea says. And in this way, holding fairness as the ideal, “We feel like TST is the natural evolution or natural progression of LaVey Satanism,” Blythe says.

Blythe’s involvement with TST began in 2013, but soon after, “… TST put a moratorium on forming new chapters,” Blythe says. With no chapter nearby, Blythe took to TST’s online forums to meet other Satanists. There she began speaking with Greaves. “Through the forum, I made sure that he kept Utah in mind for when TST began forming new chapters,” Blythe says. This persistence paid off when, in early 2016, after an interview process and waiting period, Blythe again heard from Greaves, who congratulated her on becoming head of TST’s newest chapter. Thus, the devil found a home in Utah.

Blythe, Shea and Rogers now comprise the core of TST’s Utah chapter, which features some dozens of members and innumerable allies. “We have members that come from very different backgrounds and lead very different lives,” Blythe says. “I think the Satanic culture, in general, brings in a multitude of different personalities,” locally including cosplayers, metalheads, housewives, politicians, hippies and heathens.

Rogers suggests that, due to Utah’s dominant religious culture, many non-Mormons feel marginalized or rejected, and to some, Satanism becomes a natural fit. “I was raised LDS, and for most of my childhood, I didn’t even realize a person had religious options,” Rogers says. “When I was 14, I left the Mormon Church and didn’t think about religion much until I saw TST’s reproductive rights campaign.” This bit of social activism—activism that TST prides itself on—sparked Rogers’ curiosity. “I went to the TST website, read the Seven Tenets and said, ‘Well, shit … I didn’t know I was a Satanist!’” Rogers’ story, so similar to Blythe’s and Shea’s, seems representative of many conversion stories.

To further this spiritual reclamation, Blythe, Shea and Rogers fashioned an unbaptism ceremony. “It was our first big public event. It was on Pioneer Day,” Blythe says. Rogers explains that in the LDS Church, children as young as 8 can “choose” to be baptized, “but it is incredibly coercive,” Rogers says. “The idea of the unbaptism is a reclamation of your personal sovereignty, a demonstration of your ability to decide what is and isn’t moral.” The ceremony featured lighting participants on fire using a non-threatening flammable mixture, reciting empowering phrases and having an inverted cross drawn on the forehead. Blythe beams, “Everyone in attendance came up for the unbaptism. It was incredible.”

In the coming months, Blythe hopes to further the chapter’s social activism and community involvement by starting an After School Satan Club at Vista Elementary School. The club aims to provide a safe environment for children to explore a scientific, altruistic and rational view of humanity and the world. Leaving The Beerhive, I thought, If these are the devils among us, we’ve received angels indeed.