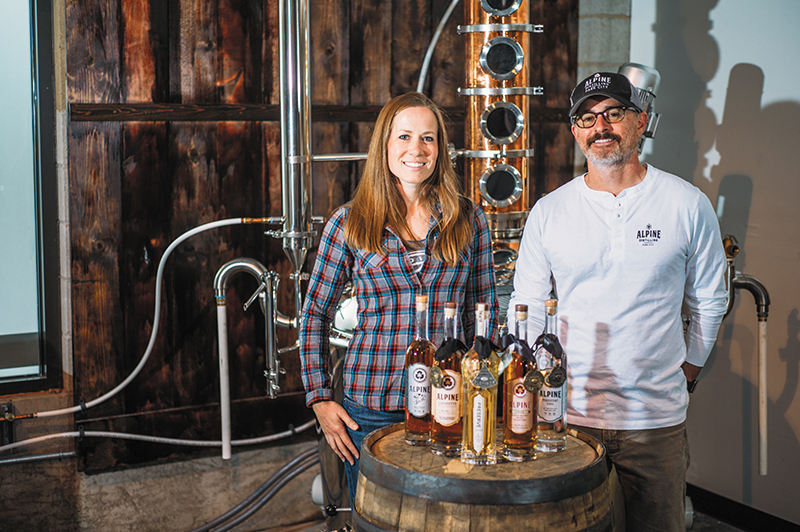 It has been a wild year for Utah liquor laws, no doubt about it. From “Bar Not a Restaurant” signs, to the .05 BAC law, Deadpool at Brewvies, and “Zion Curtain” debates—good or bad, times, they are a changin’. Despite all this, Utah has many distillers and brewers quietly doing their thing despite the noise. One of the newest additions to the scene is Summit County’s Alpine Distilling. Alpine owner and distiller Rob Sergent got into the business because of his roots. His family has distilled for generations, some making moonshine in Kentucky. Black and white photos of Rob’s forebears hang from the walls of Alpine’s distillery and retail space just off I-80 near Park City. After moving to Utah in 2011 and falling in love with the scenery and lifestyle, Rob was inspired to meld his roots with his passion for living near the mountains. “Utah, for me is being around my friends, being around my family,” says Rob. “I just want to hike, I want to be outdoors—so all of these flavors, and what we’re doing, are geared towards the alpine lifestyle, hence the name.”

After a successful corporate career including high-level jobs with Johnson & Johnson and the National Football League, Rob went back to Kentucky to learn from master distillers in order to realize his dream of crafting high-quality spirits. At the end of 2015 Alpine Distilling—which comprises Rob and his wife, Sara Sergent—began moving into their current location. “We chose our location deliberately,” says Rob. “It’s not great for foot traffic, but it’s great for water. Water is critical to what we do. We pull from an aquifer, right up in Silver Creek. We treat the water. Honestly, water is the part that often gets overlooked.” Hearing Rob talk about the processes that go into their products, it may be clear that while he is one of the newer players in the industry, he has done his homework.

They launched last year with two flavored products, Alpine Preserve liqueur and Alpine Lafayette. Preserve is a versatile low proof cordial featuring flavors of black tea, blood orange, and ginger. “There’s a tendency with liqueurs to go very thick and very syrupy, and we wanted to go the opposite,” says Rob. “We wanted something that was very versatile, with a bit more complexity in the flavor profile, but something that was highly adaptable for however you drink it.” The Lafayette bourbon whiskey is inspired by the tradition of fruit put into mason jars with moonshine. “We used ripe apricot, so it’s a sweeter whiskey, offset with cinnamon, and then we added primrose for an herbaceous note, and it’s just so drinkable.”

Alpine has since added other products as well, Traveler’s Rest single malt whiskey and and Alpine Persistent vodka, both of which won SIP Awards in 2017. “The reason that we chose the SIP Awards, as sort of our contest of choice, is it’s very large; it’s the largest international consumer-based contest,” says Rob. What this means is that buyers and beverage managers for bars and hotels are the judges. Both of the whiskeys that Alpine has launched have been gold-medal winning. Traveler’s Rest is a 100-percent barley malt whiskey, which is aged in used Jack Daniel’s barrels, and then aged a second time in charred French Oak in Park City. Their Persistent vodka is made from 100-percent corn, and is a neutral tasting vodka meant for mixing or being taken over ice.

As Rob speaks about the processes and ingredients that go into making his products, his eyes light up and he speaks while gesturing with his hands. He is quick to admit that he can be a little long-winded, explaining to the most minute detail the decision process that went into each of Alpine’s offerings. In Utah, he often finds himself explaining to people what he does, some of whom are completely unfamiliar with the distillation process. To them, he often says, “It is one of the oldest sciences in the world. Let me just explain what enzymes do to starch, what yeast does to the sugars that are created, and then what distilling and steam do to those sugars that create alcohol—I think that’s awesome.”

Speaking to the bevy of distillers and brewers within the state of Utah, Rob has nothing but positive comments. He doesn’t see others a competition and thinks that we should be proud to be producing so many varied spirits and brews locally. Speaking to the process of opening a distillery in Utah, Sara says, “I think the Utah market is great, and obviously, to open a distillery, especially in the state of Utah, is very time-consuming and can be very challenging, but every step along the way, people in Utah we’ve dealt with have been great from every aspect to the city, to the county, to the state as a whole. Everyone’s been very friendly.” All four of Alpine’s products can be found at the state liquor stores, and can also be picked up at their retail location in Park City—just be sure to call and make sure they are open beforehand. Rob says, “When we’re producing, we’re open. We don’t really work bankers hours, but when we are here, we’re producing.” Alpine lifestyle indeed.