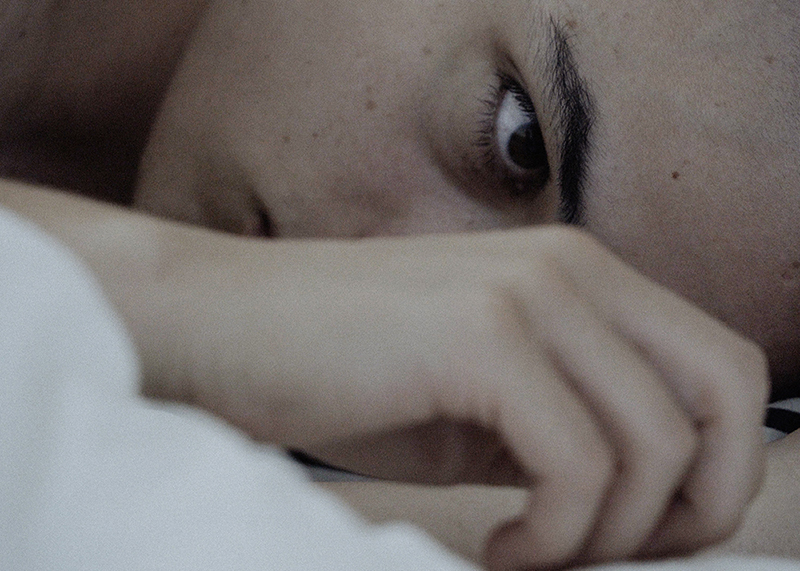 Nadia Bedzhanova’s Beware of Dog is a film that uses its lofty poetic, narrative and aesthetic ideals in service of a greater humanistic project. The film follows three characters—Marina Vasileva (Marina), Buddy Duress (Mike), Paula Knüpling (Paula)—in three different urban centers of the world (Moscow, Berlin and New York, respectively) as they struggle with and attempt to overcome three types of mental illness (OCD, Bipolar disorder and addiction, respectively). These three characters all live separate but vaguely interconnected lives, and the collective anthology of their experiences forms a picture of contemporary life that is both beautiful and damning, hopeful and bitingly realist.

Beware of Dog’s global focus is one of its most ambitious undertakings, but also one of the most personal for Bedzhanova. “During my upbringing, I grew up and lived under the influences of multiple cultures,” she says, “Russia and the United States primarily, but traveling often, and having close relatives in Germany. I really wanted to honor the places that molded me into who I am.” No one spot feels like the real “home” of the film. Rather, each city serves an equally important role as the others. This sense of egalitarian authenticity is furthered by Bedzhanova’s choice to shoot on location and use the appropriate language of each setting when featured.

“Sometimes it feels like physical human connection becomes luxury in a world of online self-concentration and presentation.”

The trials that each of Bedzhanova’s main characters goes through reflect a mixture of both her own personal experiences as well as a more outward-looking perspective. As she would describe her own history with OCD to friends, she found that openly discussing this sometimes taboo subject was, in itself a healing force. “A lot of people struggle with mental deviations, and when I was sharing my story with friends, I often was getting ‘I understand’ and ‘I feel ya’ responses,” she says. “It felt right to make something and cover a theme that you don’t see in movies often, yet is extremely relatable to a lot of people, whether they are comfortable admitting [it] or not.”

In order to address properly the realities of her character’s lives and the film’s chaotic, late-2010s backdrop, Bedzhanova employs a variety of atypical film techniques—aggressive editing, neon-lit dream sequences, shaky and almost voyeuristic camera movement among them. However, one of the most readily perceptible (and arguably successful) experiments Bedzhanova undertakes is the use of phone screens and other digital imagery throughout the film. Rather than softly glance over her characters’ shoulders, she blows the screen images up to full size, making each text message or Instagram story a significant visual in its own right.

“Sometimes it feels like physical human connection becomes luxury in a world of online self-concentration and presentation,” Bedzhanova says. “The main reason to use the digital intermissions is to shrink the space between characters and emphasize the commonality of each story, no matter what part of the world we live in. The ensemble of protagonists connects online: Physical locations are juxtaposed with digital space.”

“It felt right to make something and cover a theme that you don’t see in movies often, yet is extremely relatable to a lot of people, whether they are comfortable admitting [it] or not.”

Another of Beware of Dog’s hyper-stylized visual features comes from Bedzhanova’s use of surreality and disorientation during key moments in the film’s narrative. Against many moments of highly realist filmmaking, the few scenes where Bedzhanova breaks into shocking bits of flashing color and dreamlike imagery speak with power. Herein, the real logic of the film breaks down, and Bedzhanova finds that these moments end up portraying the deepest truths:

“We can often lose track of our own reality quickly, become lost in our mind from outside influence or even our own inner monologue,” she says. “The goal of these scenes were to express an emotion. The audience can interpret it however they feel; it doesn’t have to be objective or discreet.” It’s in these moments that viewers connect most with the characters on a deep, emotional level—it’s not about analysis or clinical study, but pure feeling.

Despite the film’s depictions of difference—neurological, geographical, socioeconomic, etc.—Bedzhanova ultimately appeals to the power and necessity of human connections. Her aim with Beware of Dog is not to fetishize or ostracize these characters, but rather to instill a sense of empathy within the viewer. “The cognitive changes over the past few years provide us a different perspective on our lives, one that emphasizes the relative importance of emotion over a reason, social connections over individual choice, perceptiveness over I.Q.,” she says.

“The cognitive changes over the past few years provide us a different perspective on our lives, one that emphasizes the relative importance of emotion over a reason, social connections over individual choice, perceptiveness over I.Q.”

While far from suggesting that no hard-lined treatment is ever needed to treat mental illness, Bedzhanova places special import on her characters’ continued perseverance and their ability to find solace through unity and solidarity (even if only through the occasional text message). “Despite my pessimistic nature, I do believe in a light at the end of the often gloomy tunnel of life’s many ups and downs,” she says.

Nadia Bedzhanova’s Beware of Dog is a poetic, colorful and timely film, one that speaks to both long-standing and universal woes as well as uniquely individual and contemporary issues. Catch the world premiere of the film at the 2020 Slamdance Film Festival, and look out for potential future screenings in New York and various parts of Europe.