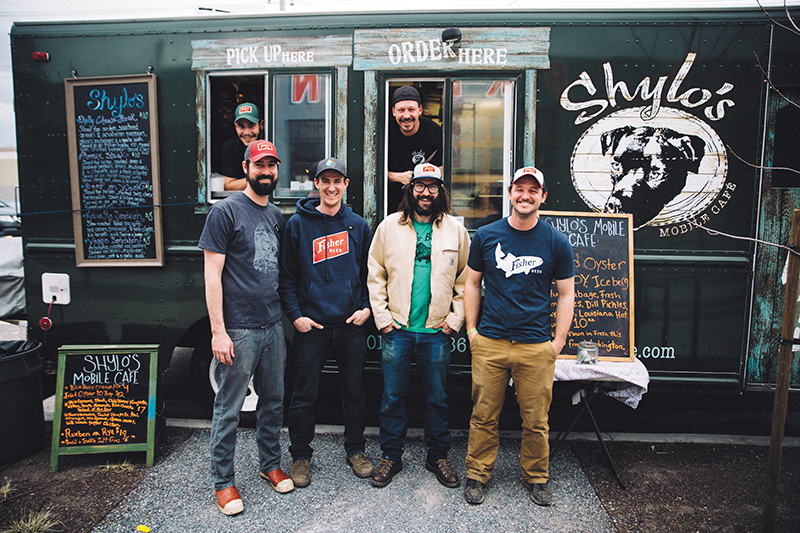 What the Truck? Fisher Parks the Food Truck Model in Utah

Call me selfish, but I want the city I live in to be the coolest. I’ve traveled all over the country, usually enjoying healthy portions of local beer and food, and I greedily covet any given ethnic cuisine, restaurant concept or beer style that I can’t find an equivalent for back home in Utah. One such trend that I’ve envied and craved over all others was the pairing of small-brewery taprooms with a rotating cast of food trucks to create casual but exciting social experiences. The brewery handles the location and the beer while the trucks satisfy patrons’ hunger with an ever-changing lineup of foods. This model has sprung up everywhere, from Washington, D.C., to Portland, Oregon, to Austin, Texas, and people are embracing the diversity of options it provides. A. Fisher Brewing Company opened its doors to a ravenously thirsty public in February and is the first to attempt this model in Salt Lake. Fisher Brewing Company opened its doors to a ravenously thirsty public in February and is the first to attempt the model of incorporating a food truck to satisfy patrons' hunger. Photo: johnnybetts.com.[/caption]

One reason for this direction, says co-owner Tim Dwyer, is a lower overhead cost. “The food truck is our kitchen,” he says over the bustling noises of the crowded taproom. It’s a Thursday evening, the after-work crowd has the bartenders busy pouring beer, and a line has formed at the the Chow Truck parked out front. “We had no restaurant experience and no desire to do that,” says co-owner Tommy Fisher Riemondy. “Plus, more brewpubs end up failing than ever succeed.” The team of four friends responsible for Fisher travelled when they were planning their brewery and have seen this model succeed. Examples like Renegade Brewing Co. in Denver, Colorado, and Marble Brewery in Albuquerque, New Mexico, helped to make it clear that “there was some other way of doing this than being a brewpub,” says co-owner and Head Brewer Colby Frazier. Another reason is the freedom: “We wanted to focus on one thing and do it as well as we can,” says co-owner Steve Brown, “and none of us have kitchen experience.”

But just because it had succeeded elsewhere doesn’t mean that it was easy. Aside from the unique alcohol laws in Utah, there were and still are plenty of challenges. “Trying to explain it to bankers and investors was hard,” says Frazier. “‘Can I buy it at Smith’s?’ or ‘So you’ll have a restaurant?’ were questions we got a lot. It was hard to convey to people who hadn’t seen it out of state.” Frazier also handles booking the food-truck schedule, and in the beginning, it was unclear how it would work. “[Food trucks asked us], ‘How many people do you expect?’ and we really didn’t know,” he says, “but they’ve all been super reliable, and when they weren’t sure about us yet, they still came. They didn’t make us guarantee anything.” Now that Fisher is open, the learning curve continues. “The waste, the styrofoam and plastic really bummed me out,” says Brown. The taproom has started providing washable service items to the food trucks to attempt to minimize the waste. “We’re still figuring out what works—plastic baskets, trays, silverware,” Brown says.

The evident hard work and attention to detail at Fisher is paying off as well. Over several visits, I spoke to many customers, and for most, it was not their first visit. Waiting in line at the Chow Truck to order tacos, Fisher guest Erin Bertram says, “Coming straight from work, having the option of food that’s local is great.” Paul Vatterott and Lauren Gedlinske were on their fourth visit, and the diversity of food options provided by the trucks is a big incentive. “We look up who’ll be here,” says Gedlinske. “It’s always a different, rotating menu.” And that variety seems to be a large part of the charm. “We get on Instagram and check,” says Vatterott. “It’s a cool model, two small local businesses working together for mutual benefit.” Local electronic-music-producing duo Mondaine & DComplex live a few blocks away and make it in frequently. “They’re right in our ‘hood—we walked over,” says Mondaine before taking a swig of her pale ale to wash down some of the Chow Truck’s excellent calamari. DComplex says, “We’ve been here a few nights in a row. It’s a different menu every night.”

A. Fisher Brewing Company has been a runaway success so far, admittedly having trouble keeping up with the consumption of their beer, having added at least one new fermenter just two months after opening, with plans for more already. A big part of that success is the loyalty that they’ve earned by providing their customers with something that can’t be found anywhere else in Salt Lake. This model may not be tried and true here yet, but the benefits like keeping it local and keeping costs low are numerous, and perhaps the greatest is sheer variety. “It reflects the brewery, the diversity of food for a diversity of beer,” says Dwyer, and I couldn’t agree more. No longer will I covet this type of setup in other cities—now we have it here in Utah. The only question is: Where will the next one be?