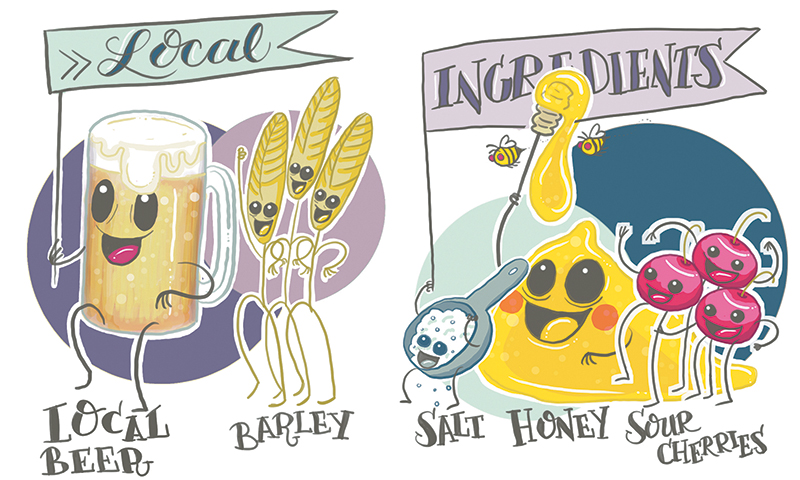 Salt Lake City is an amazing place to live in an amazing state—despite its issues with alcohol. It’s so awesome that over five years ago, I started a restaurant and brewery business, which now operates in three different locations and is looking into expansion. One of our central tenets since the inception of the company has been making buying local products a priority, but “local” can seem like a slippery concept, especially when it comes to craft brewing. Using the ingredients that are abundant around you can create a connection to the beer that would be otherwise impossible, and it’s increasingly important to me to use as source as much as I can locally.

A History Erased: How Local Ended

Beer is an inherently agricultural product, but its production has been industrialized and separated from the farms that used to be integral to its creation. Up until the late 19th century, it was common for American breweries to use only locally grown grain and hops, largely because of the difficulty and expense of getting imported products. Due to the effects of the Industrial Revolution—and, eventually, the prohibition of alcohol in 1919—agriculture and brewing were consolidated into ever larger conglomerate companies taking advantage of large-scale operations. By the middle of the 20th century, this trend had continued to the point where a few large breweries were responsible for almost all the beer brewed in America, and smaller, regional operations like Utah’s original A. Fisher Brewing (closed in 1960) were disappearing in favor of homogenized, mass-market products like Miller or Budweiser.

We all now know how this story continues: Adventurous homebrewers started opening the country’s first “microbreweries,” brewing flavorful, interesting beer to contrast with the watery yellow stuff that came in large cases from the supermarket and all tasted the same. Many of these new businesses started in industrial parts of town and served to revitalize decrepit neighborhoods, like Squatters Brewing’s first pub in Downtown Salt Lake City’s in the early ’90s, just as my company, Proper Brewing, is attempting to do in the Central Ninth area now. Being produced locally is good, but what’s more, artisans are increasingly trying to use products with local origins as well. The vast majority of hops grown in United States comes from Oregon and Washington in the Pacific Northwest, which poses the question of whether a brewer not in the Pacific Northwest can’t make local beer if it has those hops in it. As far as it concerns Utah, because of its climate, location and agricultural heritage, our state has some amazing ingredients that can help a beer cross that line from just being made locally to really being unique to this state.

From the Ground Up: Mountain Malt
mountainmalt.com

The first time I stepped inside a malthouse was near Idaho Falls, Idaho, in June of 2016. The aroma of steeping barley malt being worked inside was unlike anything I had smelled before, yet comfortingly familiar. While it used to be common for breweries also to have malting operations onsite, most modern companies only handle the finished product, and many brewers may never visit the source of where their grain is grown or malted. What I was being offered by Mountain Malt owner Jake Burtenshaw was the opportunity to trace the beer I made from the glass it was served in back to the ground where it was grown.

I had first met Burtenshaw the year before while attending a get-together for brewers at Idaho Falls Brewing Company. His family has been growing barley in Eastern Idaho for generations and selling it to the large malting operations run by Anheuser-Busch and Modelo based in Idaho Falls. Even though it’s from Idaho, this barley is truly local, as most of the fields are less than three hours from Salt Lake City—much closer than the traditional Utah landmarks of Zion, or Grand Escalante. In true entrepreneurial spirit, Burtenshaw saw the opportunity to work with smaller craft brewers and began developing his own malting equipment. He refined his process until he could make barley malt of a similar quality to anything being produced in North America, and I was happy to be one of his first craft customers. Now he is continuing to expand his capacity to keep up with demand from brewers all over Utah and Idaho. I personally use over a ton of his malt every month, and that could double by the end of this year. Every time I brew with his malt, my mind goes back to stepping into that malthouse. I think of walking from there into the adjacent fields and handling some of the raw, green grain, fresh from the ground. The sense of connection to the beer I make—which this direct relationship with the raw materials creates—is indescribable.

While malted grain is often called the “soul” of beer, there are plenty of other opportunities to use local ingredients in beer making, and there is no more iconic Utah product than honey. The Mormon pioneers adopted the beehive and the honeybee in their iconography, and it has come to influence everything around us here. Their name for this territory, “Deseret,” means honeybee, and our state motto, “Industry,” directly references bees working in a hive. Local industry is what craft brewing is all about. Martin James started Slide Ridge Honey in Logan, Utah, in 2004 after a lifelong fascination with bees. His business has grown to include most of his family members as owners and employees, and they produce not only world-class honey but honey vinegar and other culinary products as well. During a time when honeybee populations are declining around the world, James’ hives are strong due to his commitment to traditional beekeeping practices. Honey was one of the earliest natural foods fermented into alcohol by humans, so it only makes sense to continue this tradition in modern craft brewing. I use James’ honey in several beers, but most prominently in my Stumblebee Vienna Lager, an amber-colored beer that’s smooth and balances rich honey flavors with delicate malt notes. James’ bees harvest pollen and nectar from all over Northern Utah, and those sources have a direct effect on the quality of their honey, which, in turn, directly affects the flavor of the beer in your pint glass. I can pour that beer and taste the industry of this Utah family.

Another family-farm operation I’m proud to connect with is Woodyatt Cherry Farm in Willard, Utah. You may know them as the folks selling sour montmorency cherries and cherry concentrate at the Northwest corner of the Downtown Farmers Market every Summer. As a frequent market patron, I had seen their stand often, but not being the biggest cherry fan, I had glossed over their products. That was until I was looking to produce a small-batch sour beer, closest in style to a traditional kriek lambic beer from Belgium, and when I found out that Belgian brewers prize montmorency cherries, I jumped at the opportunity to source them locally. Dan and Lisa Woodyatt run the farm, which started in 1998, and I’ve been able to work closer with them on each batch. Originally, I was just buying frozen juice from them at the market, due to me making the beer out of cherry season. But with each iteration, I’ve needed more juice, and they’ve been happy to supply me directly. Next year’s batch of Proper Brett Kriek will contain over 30 gallons of fresh juice direct from pressing, and is looking to be the best version yet, all because of my relationship with these farmers. And Woodyatt isn’t the only fruit farm in Utah. All I have to do is look around to find opportunities to collaborate with Utahns who take pride in growing amazing products.

One of the joys of using local products is that you might discover something you hadn’t thought of before. When I brewed my first batch of a traditional German style called a “gose” (pronounced “GO-zuh”) in 2014, I had only read about it in books. A style that had gone extinct but was being revitalized by experimental brewers, gose isn’t what most people think of when it comes to beer. A sour wheat ale seasoned with coriander and salt? My business partners were skeptical—and, admittedly, so was I—but my curiosity was piqued. In sourcing ingredients, I had an epiphany that, as the first gose brewed in Salt Lake City, it should use local salt. I did some research and was most intrigued by Redmond Real Salt, a mineral salt mined from an ancient seabed in what is now central Utah. Real salt is raw, undergoes no refining process and, as such, is tinged a light “pink” color by over 60 trace minerals still present. The first brew was a surprising success, and now my Lake Effect Gose is one of Proper Brewing’s best-selling beers. I’ve tasted gose brewed with traditional kosher salt, and something is not quite the same—the source of even something as commonplace and taken for granted as salt can make a big difference. I’m now using over 300 pounds of real salt every year to keep up with my customers’ taste for this sour, tangy brew that owes its flavor to the literal ground of the state of Utah.

Regaining History: Just Down the Street

At the end of a long brew day, using locally sourced ingredients is about peace of mind. We’ve all heard that buying local keeps your money in your community, but it’s become easy to take that as a cliché and lose the real human impact there. If you buy a beer with local ingredients, those dollars are being passed from the brewers directly on to local suppliers, whether it’s farmers or other local artisans like coffee roasters or chocolate makers. I feel better when I can establish relationships that improve where I live, and I’m happier when I can buy products that represent the place where they were made and the people who made them. I believe It’s about reversing the trend of the 20th century toward homogenized standard products, and instead finding unique elements from each place that can make products special.