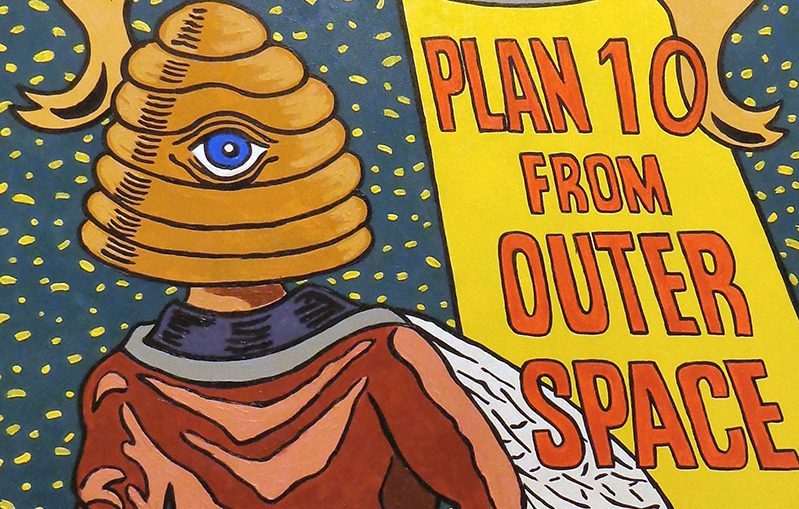 Watching Films You Like with Your Friends: The 9 Rails Film Festival Screens Trent Harris’...

“A painting can change your day, but a film can change your life,” says Bec Sato, cofounder and organizer of the Ogden-based 9 Rails Film Festival. Alongside Christopher Ostler, the pair is spearheading an independent, local-centric film festival that is hosting its first screening at the end of November. Ostler owns an Airbnb in the area, and Sato is one of the founders and owners of Cuppa Café. Both businesses are located in the heart of Ogden’s burgeoning 9 Rails Creative District, and both individuals find value in uplifting the arts that surround them. “Ogden seems really hungry for all things art right now,” says Ostler. “Film is something [where] there’s a little bit going on, but there seems to be a hole in the 9 Rails District as to how to do it.” Ostler and Sato hope to counter this perceived lack by focusing their festival on the cinema of Utah—both acclaimed and underappreciated, both historical and contemporary.

As Ostler and Sato began work on the festival, one of  the biggest shocks was how readily their 9 Rails neighbors donated their time, money and resources. “When you plant a seed of an idea, you don’t know what’s gonna bloom,” says Sato. “We were planning on this being really small, with maybe 20 super-fans in somebody’s backyard.” The resultant event is a wide-reaching collaboration between artists (Steve Stones designed the event poster), local businesses (Ellis Printing handled the physical posters and other materials) and, most importantly, a crucial partnership with Thaine Fischer  that allows the festival to be held at the freshly opened Monarch arts center. “You know when something’s meant to be because it just takes on legs of its own and it just starts running.  People jump on board and want to be a part of it,” says Sato.

Given Sato’s and Ostler’s focus on the film community in Utah, Trent Harris’ 1994 film Plan 10 from Outer Space was an easy pick for the festival’s inaugural event. Filmed in Utah, produced by and featuring a cast of entirely Utah residents, Plan 10 is one of the most “Utah” movies ever put onscreen. The film arrived immediately after one of Harris’ most nationally recognized pictures, the Crispin Glover–starring Rubin and Ed. Although that movie has gained a cult following (especially in Utah) in the years since its release, it was initially panned. “Not just bad reviews—they hated it,” Harris says with a laugh. “When [the critics] said it was the worst movie of the decade, I knew I was on to something.” He then decided to dive deep and make an even more esoteric picture with a name that pays tribute to what has historically been labeled the scourge of all cinematic history. “What are they going to do, say it’s worse than Plan 9? That’s the best press ever!” says Harris.

One of the primary critiques of Harris’ work, especially Plan 10, has been precisely this focus on Utah lore and culture. “People kept saying, ‘What are you doing making movies about Mormons? That’s a stupid idea,’” says Harris. He never bought it, however, and chose instead to make films that resonated with him and his collaborators: “If Fellini can make movies about Catholics and Woody Allen makes movies about Jews, why can’t I make movies about Mormons?” Of his countless (Harris has produced over 180 films of varying subject matter and genre) features, Plan 10 is one of the most saturated in Utah content—vaguely, the plot is a science fiction film based around actual LDS doctrine.

“You know when something’s meant to be because it just takes on legs of its own and it just starts running.”

Despite what can sometimes seem like a thick-skinned, sardonic attitude about commercial film and art in general, Harris displays much of the same community-oriented warmth and geniality that defines the 9 Rails Film Festival. After a short spell in Hollywood that left him woefully disillusioned (“My ears were bleeding—I was so angry!”), he returned to Utah for one simple reason: “I want to make films I like with my friends.” His seemingly endless list of anecdotes and stories about making his film speaks to his long connection to the local film industry, and the low-budget, personal touch to his films reminds of his unflinchingly independent approach to the medium.

Harris’ choice to focus on Utah-centric themes and locals isn’t a myopic one, however, and his almost legendary status within the community reflects this. Love for Harris’ films was one of the first connections that Ostler and Sato made when discussing the initial plans for 9 Rails, and the two find more value in his work than simple teasing and local in-jokes. “Oftentimes, you find yourself in a world where [humor] is the only way that you can get the truth that’s layers deep,” says Ostler. “[The truth] just has a way of coming out in satire and comedy and these sorts of things. It’s very salient and important that there’s space for that.” Especially since he grew up in the LDS church, Ostler finds solace in the lighthearted critiques of Harris’ films. Sato echoes that “it can’t be cathartic” to collectively engage in heady, controversial themes through a less-than-serious artistic presentation.

“Oftentimes, you find yourself in a world where [humor] is the only way that you can get the truth that’s layers deep,”

Between the long-running career of a local-film fixture and the impressive trajectory of a new local-film gathering, the inaugural 9 Rails Film Festival is a testament to the spirit of DIY art. “The goal isn’t to become super exclusive; the goal is to become ever more exclusive,” says Sato, neatly summing up the ethos that seems to surround everything this ad hoc trio touches. The 9 Rails Film Festival screening of Plan 10 from Outer Space occurs on Sunday, Nov. 24, at 5:30 p.m. in the Monarch building on 25th Street. Find more info and purchase tickets at the Facebook event page. Automotive headgear is strongly encouraged but not required.