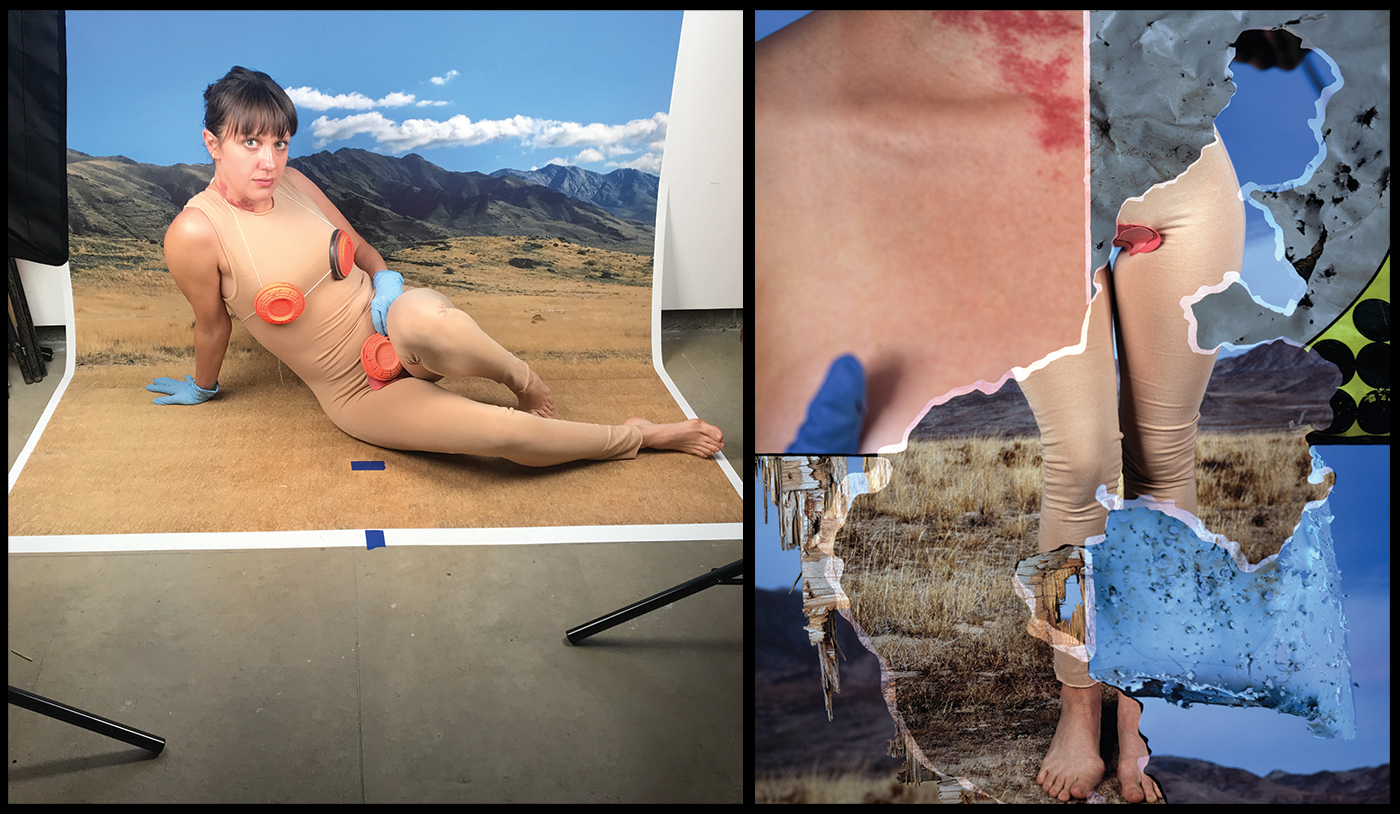 Our strange and struggling world is built on the sharp, aggressive history of colonization. Lands, biological systems and individual bodies have been the brunt of power-taking for millennia. Many narratives have been crafted to comprehend the lasting impact of colonization on modern outcomes. Utah photographer and multimedia artist Jaclyn Wright’s current photo project, Marked, makes a statement about how acts of “taking” have impacted her through intersectionalities of the personal and political.

Wright is an Assistant Professor of Photography & Digital Imaging in the Department of Art & Art History at the University of Utah. Marked is a many-faceted examination of her own embodied experience with colonization through an ecofeminist lens. Marked contains multiple components that broaden and build upon each other to create a body in themselves, as they reflect Wright’s incarnate experience especially surrounding her prominent skin marking. “The ideas that I am working from—trauma, ecofeminism, systemic violence, body/land colonization—are not straightforward or black-and-white,” Wright says. “I am interested in addressing their complexity.”

Wright places her own corporeal identity in front with Marked, specifically surrounding a large birthmark on her neck, a unique dermal identifier has brought her struggles including verbal and physical abuses. In Marked, she employs photographs, digital processes, performance and sculpture to speak to the themes of control, modification and extraction of the body and lands through her birthmark.

“[Jaclyn] Wright takes the bold and vulnerable steps to use her own body to speak to the larger soul of her art.”

“I began using [it] as a symbol repeated throughout the work, as a way to address personal experiences following the #MeToo Movement and the 2016 presidential election,” she says. “I am angry at the imbalance of power in our political and social systems. Sexual-assault survivors are called liars by politicians, the media and the public. Marked has served as a way to reclaim my birthmark as a symbol of empowerment instead of trauma.”

Wright takes the bold and vulnerable steps to use her own body to speak to the larger soul of her art. “Throughout Marked, my body appears frequently; however, it is not simply used as a stand-in but specifically references my experiences,” she says. “I am directly placing myself in a position in which I open myself up to scrutiny. This vulnerability becomes a part of the work instead of a product of the work—the scrutiny, the pity, the anger it can cause in the viewer parallels the wide-ranging physical and emotional trauma experienced by victims of assault.”

Marked begins by introducing the land and the body as separate concepts via  images from Skull Valley and performance art wherein Wright coats her birthmark with thick layers of plastered liquid foundation makeup. As the presentation progresses, the images of land and the body gradually intertwine. “I am interested in this ecofeminist perspective, oscillating between the landscape and the body, marking the parallels between human attempts to control, shape and extract from both,” she says.

Wright loops in specific items in the sculptural aspects of Marked, including found objects from target-practice sites on BLM land, including appliances and refuse that remain littering the land in an endless, non-biodegradable state. “The remnants of these objects are typically left onsite, where I collect and bring them into my studio,” Wright says. “I’m using these objects as a symbol of violence, destruction and as a way to visualize a power dynamic.”

“I am interested in this ecofeminist perspective, oscillating between the landscape and the body, marking the parallels between human attempts to control, shape and extract from both.”

In a brilliantly congruent manner, Marked is itself a bricolage of varying art forms, much like the found items she sources. “Several of the pieces are created with a large-format, 4×5-view camera and use in-camera masking,” says Wright. “The digital images document elaborate installations and still-lifes in my studio. The work oscillates between on-location and in-studio, film and digital, still and moving, installation and performance. I am interested in how these various processes (large-format film, digital images, aluminum prints, performance, sculpture) can build on one another, creating both visual diversity and conceptual complexity.”

Marked showed at Snow College from February to early March last year and is currently located in Houston at Sabine Street Studios in partnership with the Texas Photographic Society through April 18. In a time when the themes Wright explores are brought into even sharper relief amid a global pandemic and fomenting sociopolitical strains, her work cannot easily be accessed “in the flesh.” As part of an even more vulnerable professional arts community, Wright has yet to determine what the state of the world today means for her ongoing work. “I am still trying to process all of the changes and uncertainty taking place in my personal, artistic and academic life,” she says. “I feel deeply connected to the work in Marked, and while it is changing, I intend to continue working on it until it evolves into something else entirely.”