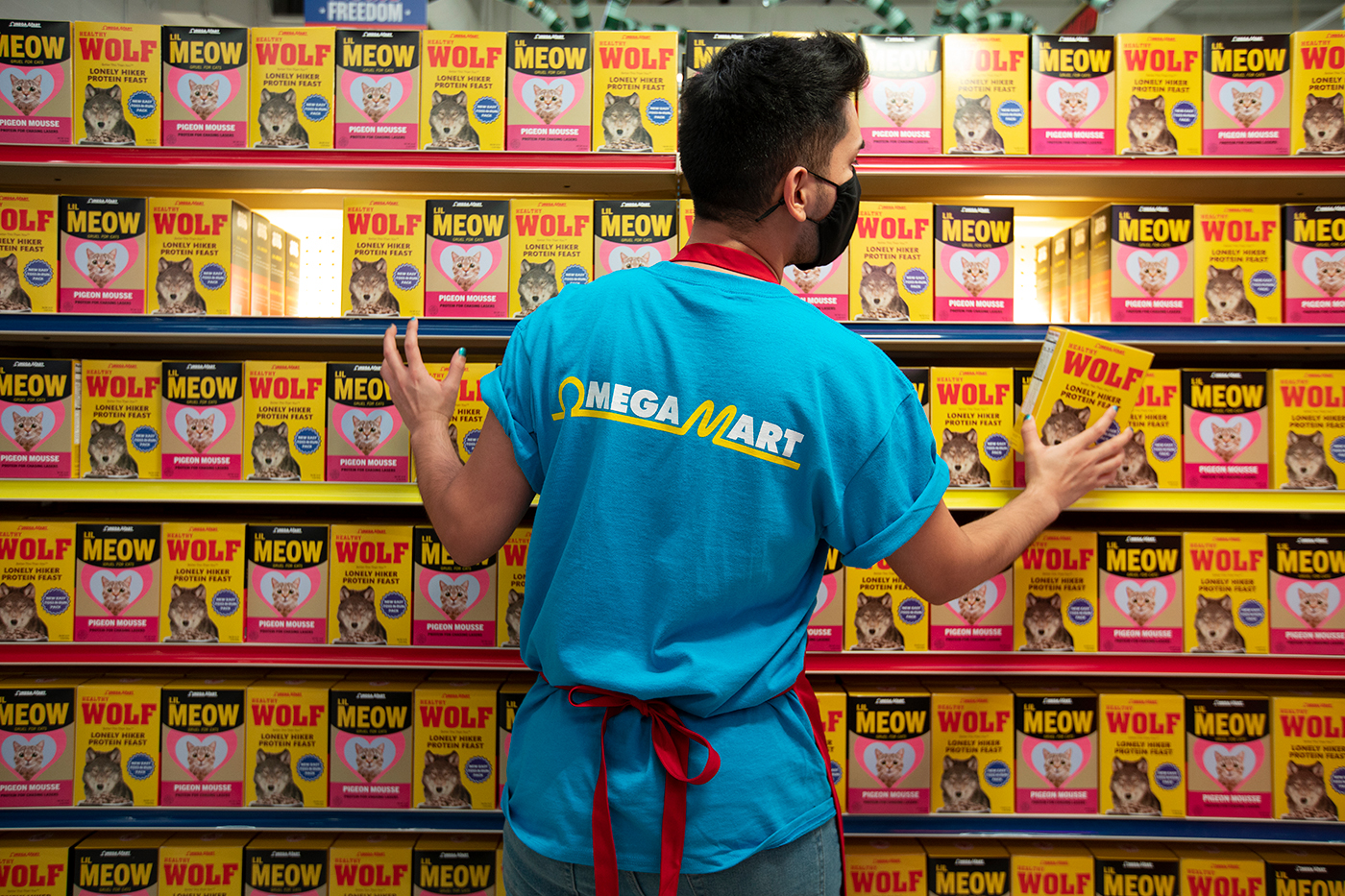 Tales about the founding of the artist collective Meow Wolf—now a growing interactive entertainment-arts company—are as legendary as the company’s mind-bending art installations. Meow Wolf’s name came out of a hat, and some of the artist collective’s initial investment came from fantasy writer George R. R. Martin (of Game of Thrones fame). Meow Wolf’s newest art experience is a 52,000-square-foot, otherworldly shopping excursion called Omega Mart, located in Las Vegas’ AREA15. Visitors get to wander more than 60 distinct spaces, discovering clues about the mysterious store at the center of the narrative and exploring their relationship with our culture of consumption. Visitors of all ages pass through high-tech portals to colorful worlds and explore room-sized audio, visual and tactile displays. According to Carl Christensen, Chief Financial Officer and Co-CEO at Meow Wolf, even though upgrading the safety procedures for the pandemic presented unique challenges, the company’s art and mission are speeding forward, with a new exhibit coming to Denver at the end of 2021.

After a surreal year, the concept at the center of Omega Mart—the grocery store—is even more important in our cultural imagination than when the Meow Wolf gang began playing with the concept in 2009. Back then, they opened a pop-up–grocery-store art exhibit with fantasy art products and volunteers acting as employees in a Santa Fe neighborhood. Today’s giant maze of sensory experiences sprints with the idea of the store at a time when it’s been raised to the status of a religious observance. Benji Geary, a Co-Founder of Meow Wolf, says on the site’s blog, “Even if you’re in Los Angeles or New York, your main outing—at least for the last year—has been the grocery store. That’s been your outlet, your release, your cultural observance. It’s been your nonvirtual experience. ‘The store, I’m going to the store. That’s the thing I’m doing today.’”

“The grocery store is even more important in our cultural imagination than when the Meow Wolf gang began playing with the concept in 2009.”

Omega Mart plays with the way consumer goods cater to our need to define ourselves by the things we buy, shaped through the data points we give companies about us. Emily Montoya, Creative Director of Omega Mart, says in the company’s blog, “Actually it’s really creepy that my identity is being co-opted and sold back to me to try to reinforce my own conception of who I am, in this weird ouroboros kind of situation.” Some of Omega Mart’s psychedelic technological elements speak to this strange, for-looped structure of desire and fulfillment, want and manifestation—and asks what real costs are hiding behind the magical curtain of product-marketing illusions.

When it comes to Meow Wolf as a company, operating in an economy that specifically marginalizes or automates away creative people, devaluing their labor while shrugging because there have always been “starving artists,” Meow Wolf is pushing the envelope here, too. Omega Mart was created by at least 350 collaborators, including visual artists, writers and musicians, bringing over 100 jobs to Las Vegas for this one exhibit. Meow Wolf fosters exploring how creative enterprises work and can best employ makers at a large scale. They are dedicated to building a more inclusive and sustainable economy, Christensen says, and even though Meow Wolf has evolved from its art-collective roots, the goal is still to help “creators who are marginalized come together to make something amazing,” says Christensen.

Giving the experience to visitors of being part of a new kind of store—which is, at the same time, a playground for shoppers and a place where art workers make a structured series of displays—makes a hybrid art site where visitors get to self-discover, which is a logical extension of American Pop Art and Andy Warhol’s soup cans. Montoya says via the blog, “I think the [Omega Mart] concept has always resonated with what we’re trying to do as Meow Wolf, in terms of just the format of the store. You have this container, then the opportunity for thousands of individual art pieces to exist on the shelves. The idea of ‘space for people to collaborate’ has always been built into it.”

“I think the [Omega Mart] concept has always resonated with what we’re trying to do as Meow Wolf.”

With vaccinations ramping up, Christensen says he has seen the light at the end of the tunnel and hopes that live events continue to get back to normal. Currently, the Omega Mart boasts upgrades to its HVAC with MERV8 and MERV13 (as he says, “translation: really good”) air filters, so the air is purified as often as that of commercial airliners.

To purchase tickets to lose yourself in this fantastic experience, visit tickets.meowwolf.com/las-vegas. Omega Mart is located inside AREA15, at 3215 S. Rancho Dr., Las Vegas, Nevada, 89102. The venue recommends you come 10 minutes before your ticketed time slot. At the entrance, there will be non-invasive temperature checks, with anyone displaying a temperature over 100.4 degrees Fahrenheit not allowed entry (and given a refund). Make sure you are feeling well before you visit, keep your mask secure as you wander, and social distance from other parties. And don’t forget—as Meow Wolf likes to remind everyone ready to jump through looking glass—“Remember to bring your unrelenting sense of childlike wonder.” You’re going to need it in the beautiful, strange dimension of Omega Mart.