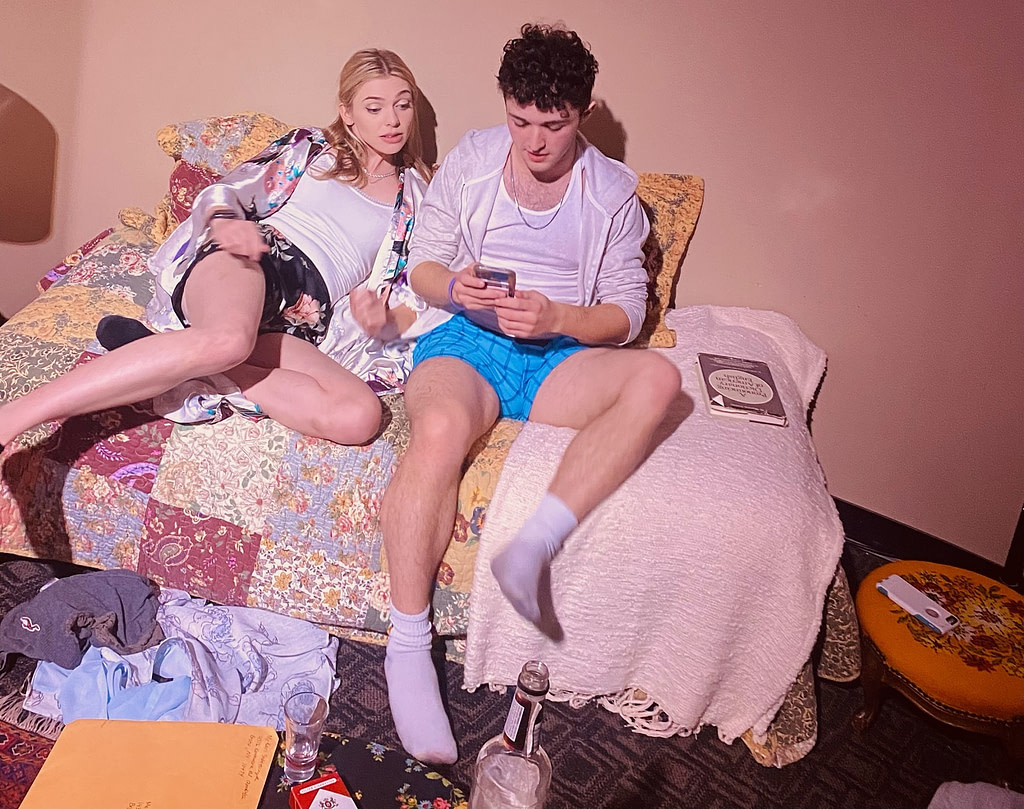 This December marks Wasatch Theatre Company’s 25th season, and this year they are showcasing DREAMERS, an original script by local playwright Ariana Broumas Farber created in collaboration with local theater group Immigrant’s Daughter. The show is running exclusively at The Box Too—a Gateway gem almost too hidden that I was turned around a few times trying to find it.

The intimate placement of the audience section, located in a kitchen of the building, heightened any anticipation and discomfort I already had walking in. The minimalist, claustrophobic set is reminiscent of a living situation a lot of us arts enthusiasts probably had sometime during college, transporting the audience to a one-room apartment under somber, blue light.

The opening scenes introduce us to Ukrainian refugee Svetlana (Sophia Van Nederveen) and Italian-American New Yorker Donnie (Tyler Kline). The two have lived as next-door neighbors for months in a seedy apartment building in a run-down area of New York City before Donnie finally decides to make a move. At first, it is easy to write these characters off as exaggerated cultural caricatures (Svetlana offers shots of vodka to a white-tank-chain-wearing Donnie), but as the story develops, so does the authenticity in their roles.

Kline successfully creates a highly unlikable character within the first five minutes through Donnie’s obscene, obnoxiously macho personality. Svetlana serves as a foil to the naive Donnie with her reservation, poise and calculated demeanor, and Nederveen shines as an emotionally calloused woman who has adopted survival as a second skin. The interaction between these vastly different individuals throughout the course of their short-lived overlap reveals more about how cultural, gender and religious differences are perceived and, more often, misunderstood under American idealism.

The living room in which their story develops is closed off from the outside world. A noteworthy scene finds Donnie watching the Russian invasion of Ukraine on the news in silent shock, his American pop music playing from a portable speaker while Svetlana frantically packs her things in the background. Throughout the play, the audience sits in on vulnerable moments for both characters, propelling Donnie and Svetlana to three-dimensional complexities. The initial exoticising of one by the other lights, burns and eventually snuffs out the tangible, electric and hilarious chemistry between them. The actors flawlessly embody the culture each character represents with skill that is rare to witness up close. Klein and Nederveen are another caliber of professionals, and their highs and lows kept me in a trance.

DREAMERS takes the audience on a roller coaster of conflicting emotions, and in true postmodern fashion, it doesn’t seek to answer any questions or push any moral objective onto viewers. The incomplete narrative is simply a window into the lives of two people on perpendicular paths, propelled by their history into an unforeseeable future. If you’re in need of an emotionally jolting experience, be sure to see DREAMERS for a true diamond in the rough.

DREAMERS runs December 1–10 at The Box Too, located at 130 S. 400 West in The Gateway. Seating is limited to 14 seats per performance and tickets are available at theboxgateway.org. –Ashton Ellis