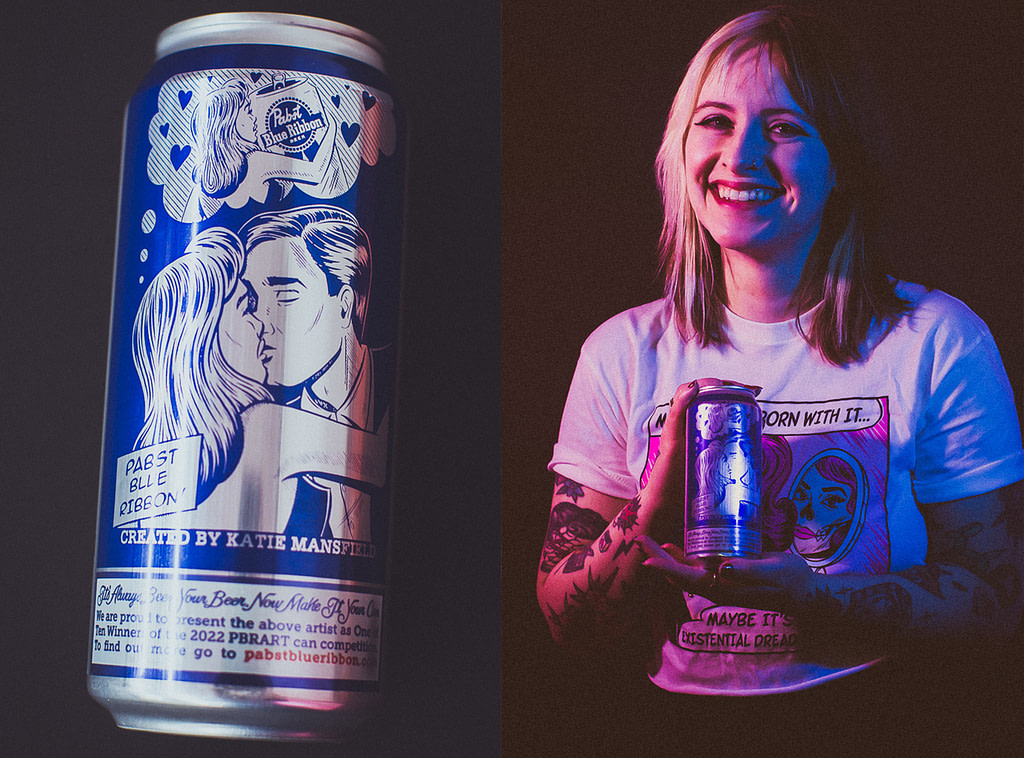 Many of us are familiar with the predicament of being locked in a kiss with someone and wishing we were drinking a cold beer instead. Fortunately for kissers and beer-drinkers everywhere, Katie Mansfield has managed to perfectly encapsulate this experience in her winning design for the Pabst Blue Ribbon 2022 Art Can Contest.

Mansfield’s design features a man and woman entwined in a passionate kiss with a thought bubble above the woman’s head that shows her embracing a can of PBR in place of the man. “The idea just kind of clicked,” Mansfield says. “I thought it would be funny and also kind of feminist because she doesn’t really need to be kissing this man; she could just go drink a beer instead.” Mansfield discovered the contest after seeing the winning designs from the previous year and knew it would be a perfect fit for her art style, which she describes as “retro, comic book–inspired pop art with a feminist flair.”

After submitting her design, Mansfield was selected as one of 25 finalists. From there, the general public voted on their favorite designs to be crowned as the 10 winners of the contest. “I knew what day [the winners] would be announced, so I was just a nervous wreck all morning,” Mansfield says. “When I got the notification that PBR tagged me in something [on Instagram], I couldn’t look at it. I made my partner look because I was so nervous, and he was like, ‘Yeah, you did it.’”

“I thought it would be funny and also kind of feminist because she doesn’t really need to be kissing this man; she could just go drink a beer instead.”

Having grown up watching cartoons and drawing comics of her own, Mansfield developed her artistic style around that comic book look. “Retro cartoons and comics have always been my favorite style of art,” Mansfield says. “I used to do really bad comics in school or in class; whenever I was supposed to be doing other stuff, I would just be drawing.” Alongside discovering her individual aesthetic, Mansfield noticed the often problematic and outdated messages behind retro comics and set out to make the style her own and modernize the messages behind her work. “I like to draw a lot of girls who are super empowered and things that have to do with mental health,” Mansfield says. “What I want to do is make art that relates to people.”

This desire to relate to others and build community through art prompted Mansfield to share her work on social media and to start her own brand, Tragic Girls. “Tragic Girls is my love for retro comic book art and pop art, … trying to make it modern and make it relate to people today,” she says. “Creating art that can be relatable is really important to let people know that we’re not alone in this world.” Mansfield has made her designs and illustrations available on phone cases, bumper stickers and all kinds of apparel, spreading the Tragic Girls message both online and on the streets.

Although the connection and community that Mansfield has found within the art world has been a generally positive and supportive space, she has also had to learn how to interact with people who are less fond of her work. “Whenever I post something that I think is going to be controversial, I don’t read the comments,” Mansfield says. “Having a social media presence is hard because you get a lot of people getting angry at what you do. I just try to remember that I’m not making art for those people. I’m making art for myself and for people who appreciate what I do.”

“I like to draw a lot of girls who are super empowered and things that have to do with mental health. What I want to do is make art that relates to people.”

Being selected as a winner of the PBR contest showed Mansfield the amount of support and love others have for her art, and it also allowed her to share her work outside of social media on an entirely new scale. PBR cans featuring Mansfield’s design were distributed all over the country, introducing her work to people who may not have otherwise found it. Even Mansfield, who primarily makes and presents her art digitally, was shocked by the casual presence of her work in the physical world around her. She says, “I’d be somewhere random, out and about, and my art would just be there on a can of beer … It’s so surreal.”

If you missed the release of Mansfield’s PBR design in February, don’t stress! You can still pick up an art can until the end of 2022. To keep up with more of Katie Mansfield’s work and to get your own Tragic Girls apparel, find her on Instagram @tragicgirlsco and visit tragicgirlsco.com.