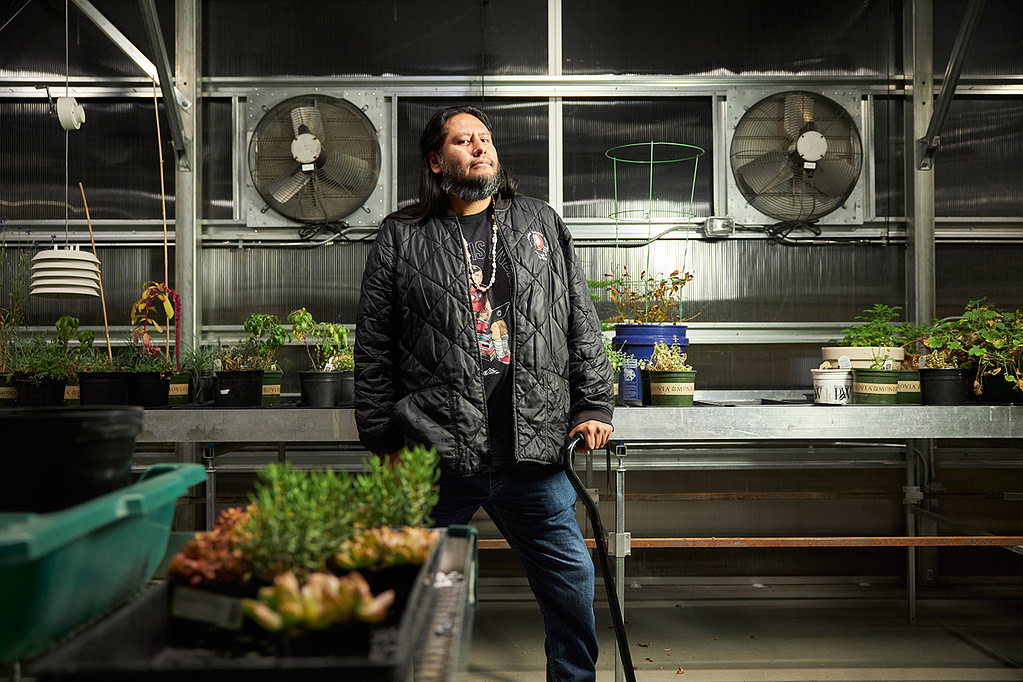 A Humble Prayer: A Conversation with THIS WAS THE PLACE filmmaker Nathan Manuel

Before sitting down to talk with local filmmaker Nathan Manuel about his new documentary series THIS WAS THE PLACE, Manuel showed me around The Neighborhood House, a nonprofit dedicated to providing daycare and other community resources in SLC’s Poplar Grove neighborhood. Manuel showed me the greenhouse and gardens, of which he is the proud caretaker in addition to being a School Age Teacher for the organization, which offers community and education services for kids and adults.

Manuel gives himself wholly to his community; his passion and dedication for the people is no more clear than in THIS WAS THE PLACE, a four-part documentary Manuel filmed devoted to exploring what land means to the Indigenous people living in Salt Lake City. Manuel’s impromptu tour of the grounds also served as a microcosm of the issues at the heart of the documentary: land and community.

Each of the documentary’s four episodes addresses a different theme: land, warriors, food sovereignty and the Native American understanding of Thanksgiving (referred to as “Thankstaking”), respectively. The film was originally released throughout November 2021, with one episode rolled out every Thursday before the fourth episode’s release on the Thanksgiving holiday. The entire documentary is now available on YouTube.

“When the Library approached me about a land acknowledgment, I was just like, ‘It’s cool to have a piece of paper that acknowledges the land, but what does this really do for our communities?’”

For Manuel, the idea for the documentary developed from a duty to highlight the Indigenous community of which he is a part. Originally approached by the Salt Lake City Public Library for a land acknowledgement—a formal statement recognizing the relationship between Indigenous Peoples and their ancestral lands—Manuel decided to take things a step further.

“When the Library approached me about a land acknowledgment, I was just like, ‘It’s cool to have a piece of paper that acknowledges the land, but what does this really do for our communities?’” says Manuel. “For this being stolen land, specifically ancestral territories of people that lived here before, what are they doing for the communities here? I approached them with that, and they came back and said, ‘Well, we’ll give you full control to make your own documentary with our resources.’” THIS WAS THE PLACE is a collaboration with the Salt Lake City Public Library’s Jason Rabb, who edited the documentary down from around nine hours of content filmed by Manuel.

“A lot of those holidays are really exploitative and violent still—what they symbolize and what they really mean.”

Manuel began filming in the summer of 2021, traveling between the Tohono O’odham Nation Reservation and Salt Lake City to conduct interviews with people from several different Indigenous communities from across the West, including Samoan and Tongan peoples, the Native Peoples of Utah (Northern Ute, Diné, Goshute) and several members of Manuel’s own Tohono O’odham Nation, whose boundaries are bisected by the border between Mexico and the United States.

To the documentary’s interviewees, the definition of Indigeneity is tied to the physical and spiritual interconnectedness between land and its ancestral inhabitants. As the release date for the episode involving warriors fell on Veterans Day in 2021, many participants grappled with the oft-conflicting identities as both Indigenous people and United States citizens. For Manuel, the question of Indigeneity is a metaphysical one. “When you talk about the border, that’s literally your mother,” Manuel says. “You can’t say, ‘This arm belongs to this person, and another arm of your same mom belongs to this person.’”

Manuel hammered home the importance of accountability, including the responsibility of acknowledging the violent legacy of some of our most beloved holidays and their exploitative, violent nature. “A lot of those holidays are really exploitative and violent still—what they symbolize and what they really mean,” he says.

Accountability should go beyond simply acknowledging past (and present) injustices, too. “There’s a stereotype that because we’re native we get free education, we get all of these handouts … but that’s really not true,” he says. Accessibility to resources, specifically food, is another issue the documentary discusses. Manuel notes that Salt Lake City’s west side lacks access to healthy food. “You do see a lot of processed food. You do see gentrification taking off because it’s the cheapest land,” he says. “I want more green spaces because they unite people rather than a big nice apartment complex that is going to push people out and bring people in that are not from the neighborhood.” For Manuel, green spaces will not only bring the community closer together but also work toward food sovereignty, another major subject of THIS WAS THE PLACE.

“It feels good to share this message with the community, with the people, with the reservation [and] with the world. It really just came down to a strong, humble prayer.”

In addition to exploring injustices directed at Indigenous communities, Manuel wanted to highlight the positivity of the nations in his film. Many interviewees shared songs passed down through their respective Indigenous traditions. “It’s always an honor for people to do those types of offerings,” Manuel says. “They believed in everything I was doing. They believed in the vision and the message.”

Manuel’s final message was hopeful in spite of what seems like insurmountable obstacles. “It feels good to share this message with the community, with the people, with the reservation [and] with the world. It really just came down to a strong, humble prayer. If we don’t stand up and take a stand and protect something, we are going to lose everything. That’s what I really want people to know. Mother Earth is hurting right now. She’s being raped, and we need to acknowledge that. We, as two-leggeds, are protectors of the land no matter where you’re at. We all have tribal native lineages all over the world; it doesn’t matter who you are. We’ve just been imposed by a machine of colonialism, capitalism, things where we’re just trying to survive.” We had to assimilate into this machine to survive, Manuel says, but we have to remember who we are as people.

You can watch THIS WAS THE PLACE on YouTube and read more about the Salt Lake City Library’s role in the project at events.slcpl.org. Additionally, you can support Manuel in his fight against ALS via his GoFundMe.