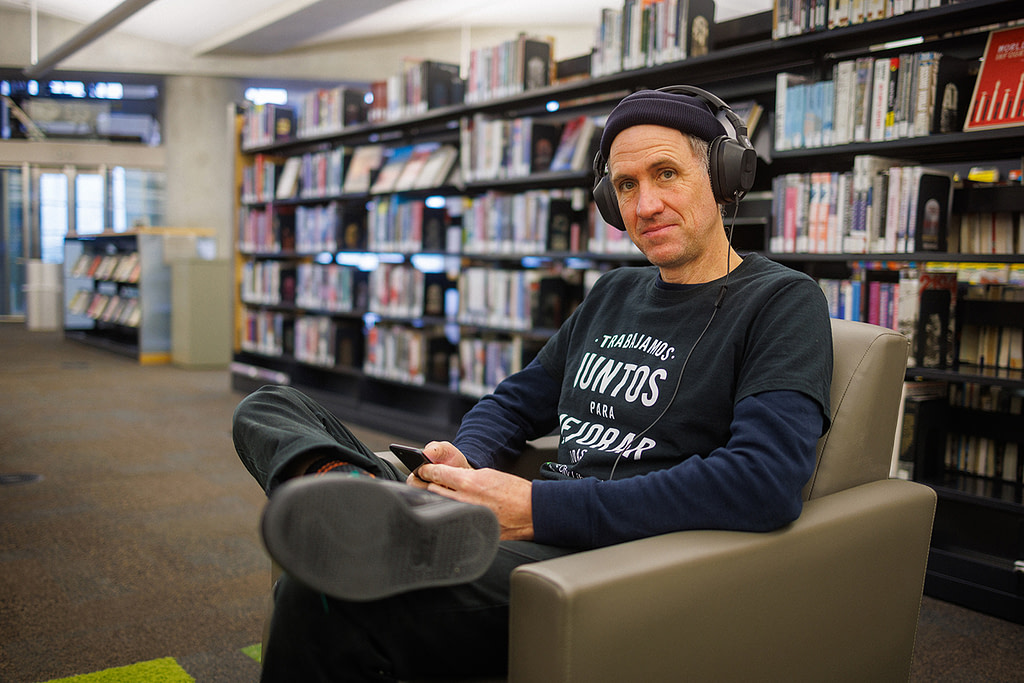 Anyone in Salt Lake can tell you the value of our local library. Beyond being a free repository for books, the Salt Lake City Library is full of passionate people who are eager to uplift others in the community who share their interests. Jason Rabb, a librarian at the 400 S. branch, is particularly noteworthy in leading the charge to bring local music to the forefront of the library’s archival and cultural efforts. Rabb, a librarian of 11 years who started as a shelver in 2010, works both as a day-to-day librarian answering patrons’ general questions and as a coordinator of some of our community’s most valuable programming, including 12 Minutes Max and HUM (Hear Utah Music).

“It’s important to showcase not only musicians but people who write about local music … We’re inviting the community into that part of it as well.”

Perhaps Rabb’s, and the library’s, most significant contribution to our music scene is the Local Music Archive, a project that was spearheaded by SLUG Magazine about five years ago. “SLUG Magazine had this amazing archive of local music that was piling up in the office over many decades of people sending in their local music to be reviewed by SLUG,” says Rabb. “Angela Brown reached out and felt strongly about finding a way to make this amazing stuff available to the community.” Between SLUG and library volunteers and contributors, Rabb helped lead the effort to digitize over a thousand CDs and tapes (some completely unmarked), as well as their accompanying art, into the library’s database.

“To bring [this collection] to the library and make it available to the public creates this amazing resource of local music history,” Rabb says. Many recordings go back a few decades at least, and their archival fosters broader acknowledgment of the value of local music as part of Utah’s history. “We have all these institutions for Utah history and the settling of this valley. I think music gets forgotten in that,” Rabb says. Now, anyone can access this history and appreciate it.

Rabb feels that performance is a valuable thing to offer, too, and the library accomplishes this through 12 Minutes Max. This program runs every third Sunday of the month and invites performers from SLC’s music, dance and film scenes to perform and collaborate. 12 Minutes Max started “about four or five years ago,” says Rabb, and provides an opportunity for artists from separate communities to collaborate with each other. “The idea was anything goes—any art you can perform in 12 minutes or less: Go!” 12 Minutes Max was the first of the library’s programming to be adapted for the virtual setting in which it now runs, and Rabb says this paved the way for more of the library’s local, virtual programming, such as HUM TV.

“Hear Utah Music,” or “HUM,” is the library’s portal for local musicians to post their work and house an artist page, as well as make their music publicly available. “Before the pandemic,” Rabb says, “we had been doing a lot of local-music programming at the library: We had a HUM Fest with music on the roof and out on the plaza.” Rabb also coordinated a series called “Shhh,” wherein artists were commissioned for quiet music to be played inside of the library. “Finding a way to continue that tradition of live music at the library, during the pandemic, that all led to HUM TV,” he says.

“We have all these institutions for Utah history and the settling of this valley. I think music gets forgotten in that, now anyone can access this history and appreciate it.”

HUM TV is an ongoing, public access–style online show in which the library gives musicians audio/visual equipment to film themselves performing. Intercut with this are interviews with the musicians conducted by a guest host from the community, someone who is a local music advocate, including representatives from publications such as SLUG Magazine and City Weekly. “It’s important to showcase not only musicians but people who write about local music … We’re inviting the community into that part of it as well,” says Rabb. “I think that perspective is unique to HUM TV.”

You can see the fruits of Rabb’s leadership at slcpl.org, where you can find links to HUM, HUM TV and the Local Music Archive.