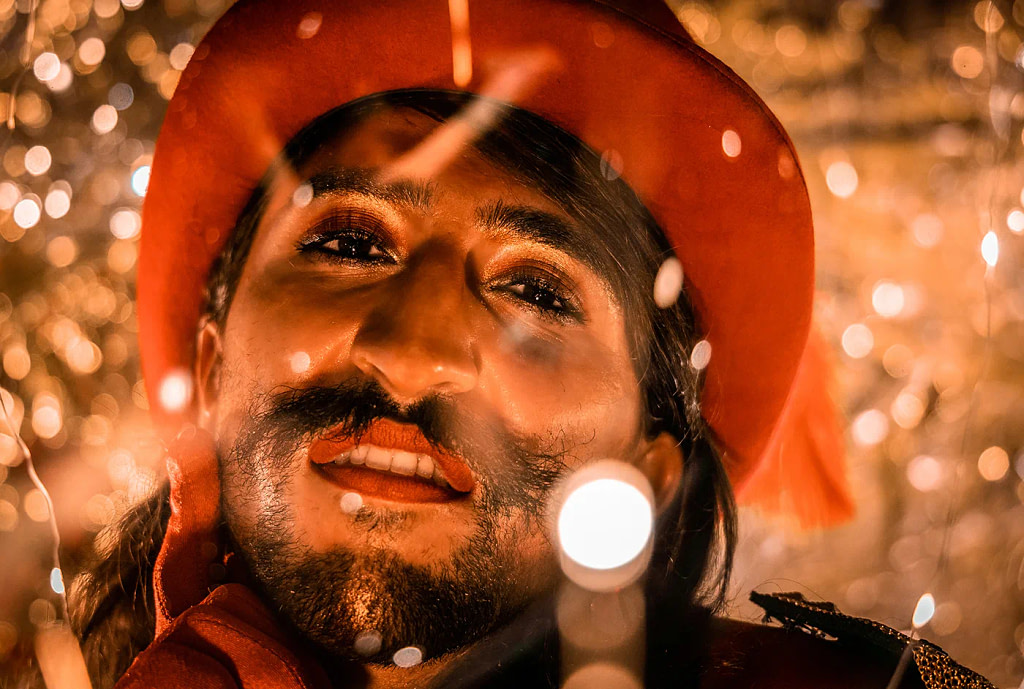 Flammes grew up on a reservation in Montana, and having been raised in the Mormon church, he felt, “very repressed generally.” Those feelings of oppression didn’t stop him from taking an interest in Greek mythology and musical theater, where he found a sense of belonging and wonder. “I wanted to combine my love of performance with my fascination with Greek mythology,” Flammes recalls. “So I took Eros and made him my incarnation.” To fully realize himself as a performer, Flammes took dance classes at age 21 and immediately fell in love. During that time, he watched his first aerial performance, and within a few weeks he found a home in the circus community. “It’s such a close-knit group, and they’ve allowed me to find my passion,” says Flammes. Of course, the passion that Flammes refers to is dangerous, beautiful and primal—fire.

“I wanted to combine my love of performance with my fascination with Greek mythology.”

For Flammes, working with fire allows him to connect with something deeply ingrained in the human experience. He says, “People have been dancing around fires for thousands and thousands of years, and my art is a celebration of that.” Flammes also finds beauty inthe inherent duality of fire, which is capable of both destruction and creation. “You have to respect the limitations of what you can do with fire,” he says. Watching a performance from Flammes, you wouldn’t think he’s limited to much. The artist is skilled with all sorts of blazing flow props, including batons, clubs, staff, poi and even fire eating.

Having been performing on Utah’s stages for years, Flammes has become both a celebrated artist and teacher. In 2021, Flammes collaborated with his husband, Trent, and Madazon Can- Can to produce the circus burlesque troupe Circus Steria. “We created Circus Steria with the intent to make the performer culture we wanted to see and to provide more opportunities to queer artists,” Flammes says. As an organization, Circus Steria provides a clear chain of command between rotating cast members and venues, while ensuring each performer feels respected and valued. The group has already produced a number of successful shows, like “SOUL-stice,” “Darkside of the Moon Ball” and the “Grief Circus.”

Eros Des Flammes doesn’t just play with fire, he dances with it, embracing each threatening ember and beautiful spark just as humans have done for thousands of years. See him perform June 3 at Dubai Ultralounge Bar, June 16 at Metro Music Hall and June 18 at The Brickyard Bar. Follow Flammes on Instagram @eros.des.flammes and Circus Steria @circussteria.