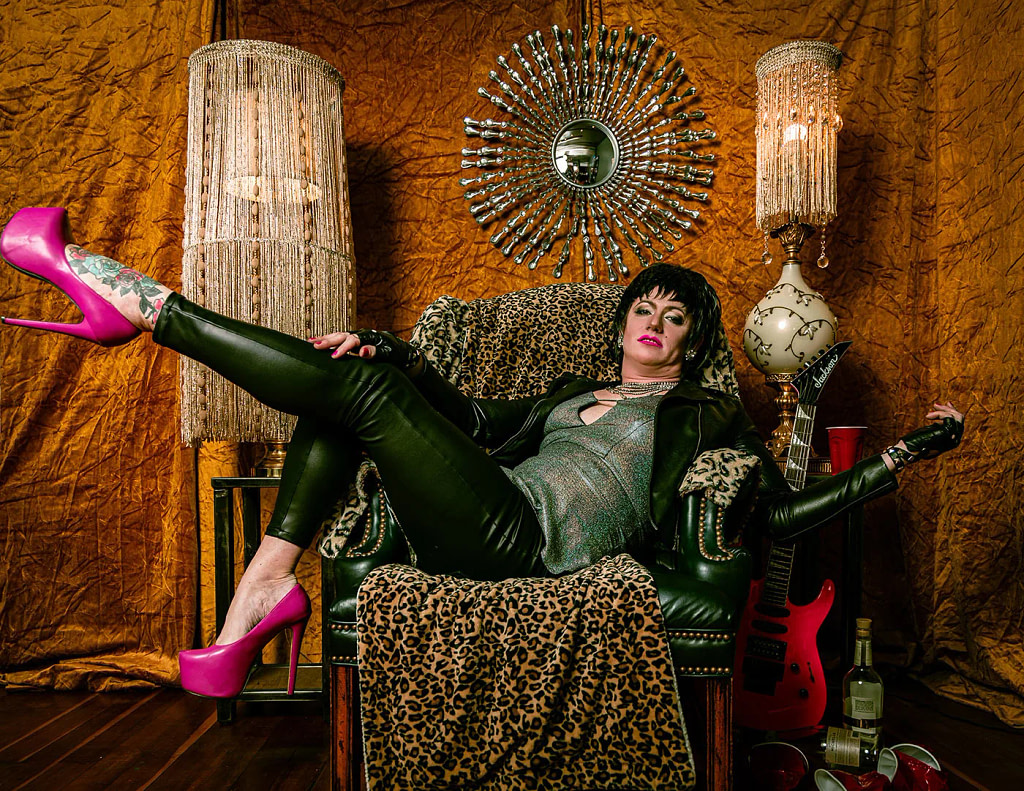 An advocate, performer, musician and bad ass friend, Sofia Scott has been working within the LGBTQIA+ community for many years now.
Photo: Bonneville Jones

There are few individuals who are able to make an impact within their local community across the board quite like Sofia Scott. An advocate, performer, musician and badass friend, Scott has been working within the LGBTQIA+ community for many years now.

I first saw her when she performed at the Miss City Weekly Pageant when I was just a wee little ally living in Provo and attending BYU. Her energy inspired me. Scott blasted out onto that stage with the power of a thousand suns. Scott is, after all, known as The Rock Princess, and the title has held up as long as I’ve been crawling around Kilby Court, Metro Bar, Urban Lounge and any other promising underground back-alley show in Salt Lake.

“I watched these bands and thought it looked like so much fun and wanted to do that and had an itch to perform but never could get over that stage fright issue until I came out as trans.”

In 2012, A few years prior to seeing Scott perform at the City Weekly event, she had a life changing moment as a spectator. “When I first came out trans, on a more low-key scale, I went to the City Weekly event as an audience member and it was the first time I had experienced a drag show. I didn’t even really take it as a drag show, more of a punk rock show,” she says. “It was something to aspire to. I have been a musician since I was a teenager. But at the time, I was just starting to pick it up again and I used my guitar as a sort of prop … a lot of people were surprised that I could actually play that and play it well and write songs. So I started working with this Rock Princess identity … and it just kind of stuck.”

Scott grew up in a rock n’ roll family. Bands like Faith No More, Nine Inch Nails, Deftones, Journey and Guns n’ Roses have inspired her sound and overall aesthetic, and these influences taught her how to rip on guitar. I asked her if she’d be willing to play a little bit of one of her songs she’s been performing lately and without hesitating she plugged her electric guitar into her amp and played an amazing and original grunge-rock song (which, through our cell phones, only added to the aesthetic of the song). In regards to Scott’s musical roots she says, “I got into the popular suburban grunge as a kid, but into Megadeath and Metallica too. I watched these bands and thought it looked like so much fun and wanted to do that and had an itch to perform but never could get over that stage fright issue until I came out as trans.”

Not only does Scott rock on stage, she also kicks ass off stage as well. Scott has worked as a philanthropist on events such as Transgiving, an all-ages event where music, art, food and a vibrant atmosphere combine to provide a safe refuge during the holidays for our trans youth and other LGBTQIA+ community members. Her latest passion came about due to noticing a need, or “a hole” that needed to be filled. “I was really just looking for a home for my band and I to play, and I would try to get on the Pride circuit and they would turn me down and be like, ‘There’s no there’s no room for you here.’ and a bill would just be filled with DJs and Drag Queens and I was like, ‘That’s not fair, I’m fucking queer too, so we should be on there just as much as these people … Just because we play guitar and heavier music … doesn’t mean we shouldn’t have a place here.”

“I went to the City Weekly event as an audience member and it was the first time I had experienced a drag show … It was something to aspire to.”

Ultimately this gave Scott the idea to start her own event during Pride weekend to fill the void she recognized (as she explains to me while her two cute cats meow for her attention in the background) and henceforth came to life her vision to create a space/event for other transgender performers, titled Genderfuq. “The idea is to give a platform to people that are trans,” she says.

Scott’s first Genderfuq was a huge success. Now, years later, this upcoming Pride weekend, Scott is expecting to have the biggest Genderfuq event in the herstory of Genderfuq. “We’re going to do it really big this year. It’s gonna be two parts. An outdoor part from 6 p.m. to 10 p.m., and an indoor part from 10 p.m. to 1 a.m., and every act is trans … every act,” she says. “And my band now, everybody in the band is trans, and they want to play some heavy ass fucking rock music, and I’m like, ‘alright, lets do it!”

Check out Sofia Scott’s music, as well as updates on future shows and events she has planned on Instagram @shecock.band and @sofiascottrocks.