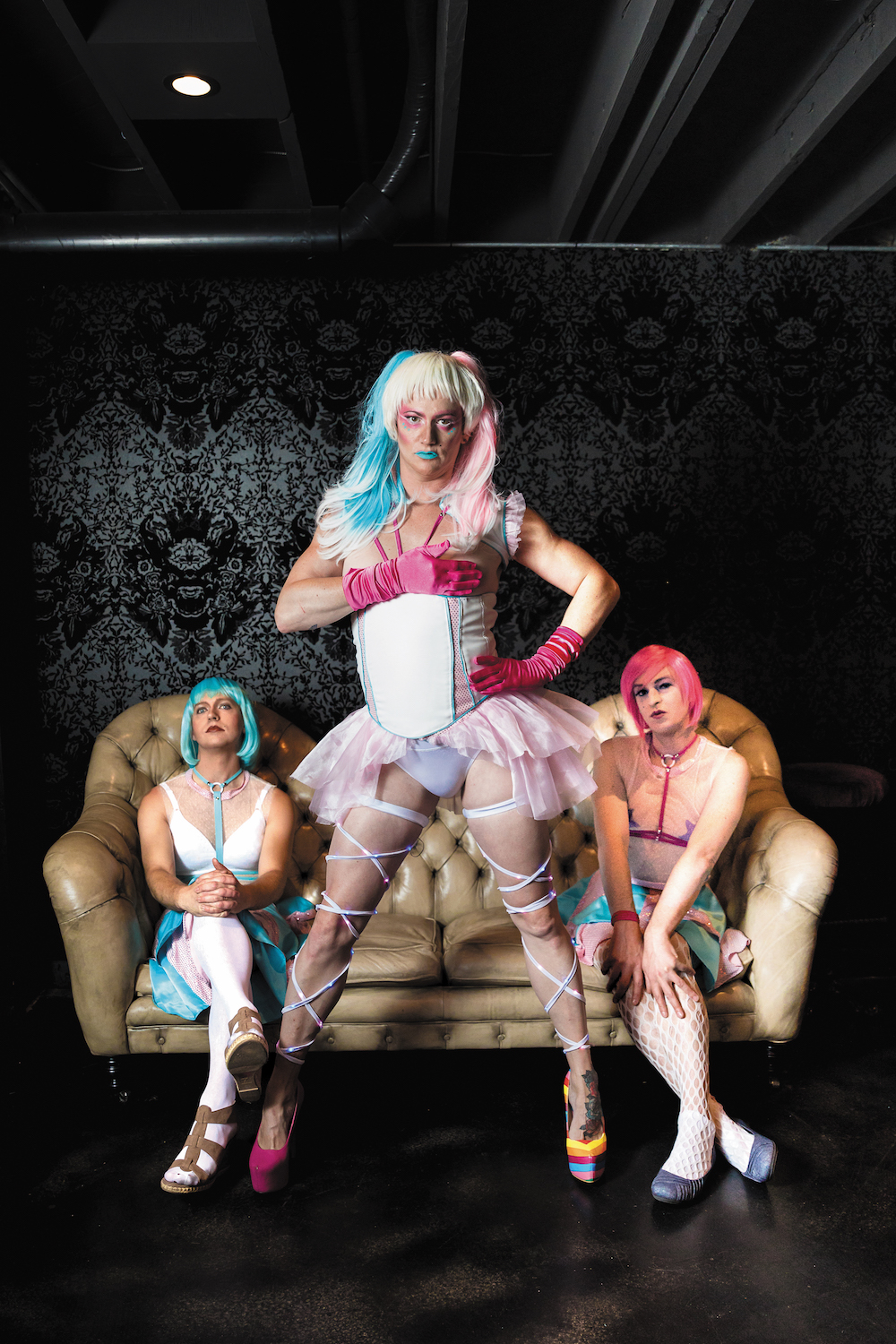 With the red-hot days of summer upon us, come to Localized, a free show to satisfy your thirst for rock n’ roll. Shecock and The Rock Princess, Magda-Vega and Galagher will turn up the gain, cranking out guitar solos and melting faces at Urban Lounge on July 19 (doors at 8 p.m., show at 9 p.m.). Get some reprieve from the summer heat with a cold one (show is 21-plus) with our sponsors: Uinta Brewing Co., High West Distillery, Spilt Ink SLC and KRCL 90.9FM.

With full faces of makeup, pink corsets and attitudes to match, Shecock & The Rock Princess, comprising guitarist/vocalist Sofia Scott (The Rock Princess), bassist Garrett Gridley (Low End Lucy) and drummer/vocalist Matthew Bennett (Mat Benatar), have a heavy sound and profound message. “We dress in ‘drag’ so people don’t really expect a loud, heavy and pretty aggressive sound. I kind of like to fool people that way,” says Scott, the main songwriter, who cites Guns N’ Roses as one of her earliest influences. “We’re kind of like a drag band I guess. It’s easy for people to comprehend that,” she says. “But I’m transgender, transsexual, transitioning, all the trans. So that’s what we stand for, first and foremost.” Blending the best of rock n’ roll and queer culture, Shecock combine loud, punk-inspired rock and danceable pop music.

Scott initially got her start with drag when she first moved to Salt Lake City, though she was chiefly a musician. “When I was doing drag, I got really super-duper bored, because I knew that I could sing these songs that I was lip syncing,” she says. Scott wrote her own song for the City Weekly pageant in 2013, and from there, she started performing more as a live musician. Under the moniker The Rock Princess, Scott started opening up shows before being convinced to include the rest of the band. “I was kind of apprehensive about it because I really hold my music close to my chest,” she says. Originally, the band had a different drummer, but when that drummer didn’t work out, she called on Bennett, whom she met and defeated at an air-guitar contest. “[Bennett and Gridley] jumped on board when they were like, ‘Hey, we can dress in drag? And play onstage? Dope.’ And that’s how it all started,” says Scott.

Shecock don eye-catching costumes and are quintessential rockers who borrow from genres like punk and metal, something they’ve found comes across as unexpected. “[Transgender people are] sort of revolutionaries in a sense,” says Scott. “So I feel like when you’re queer, or trans, you get marginalized, even when it comes to music.” For them, there’s a certain expectation when they’re onstage wearing makeup and dresses, a stigma they cut through with their music. “We try to break all of those stereotypes,” says Bennett. “We’re just playing music that we like. We like heavy music.” Shecock are gaining more followers, more people who want to collaborate, and more people who hear their message about trans visibility, a positive trend that the band hopes continues. “We want people to have fun, and the whole idea is to be a little more conscious of trans people. I like it when people go, ‘I’ve never seen anything like that before,’” says Scott.

Most of Scott’s lyrics talk about her experience as a trans woman, and there is an element to Scott’s songwriting that makes her songs relatable to almost anyone. “There’s some depth to the songs that anyone can connect with,” says Bennett. “When [Scott] talks about her depression and coming out in public, those are things that everyone can relate to, whether they’re transgender or not.” For the band, this has led to collaborations with groups outside of their genre, such as Scenic Byway, who performed alongside Shecock at the Genderbending Crossdressing Transgender Awareness Party, which Scott organized as a kickoff to Pride this year. “They were performing and showing that they were allies,” says Bennett. “That’s something that’s so crucial to the movement.” The theme of the night was blurring the lines of gender, which Bennett and Scott say was well-received. “What made it fun is that you could be whatever you wanted,” says Bennett. “Our friends who are non-binary felt like it was a safe space because no one was judging on what you wore before you got there. It was beautiful, that everyone felt so free and so safe.”

This event, as well as performing at the Pride Festival, was a way for the band to reach a wider audience with Scott’s lyrics and message. “Being an advocate for trans visibility is important for me,” says Scott. “It’s based on my experiences. I think it’s important for everyone to hear regardless of whether you’re trans or not. It’s the up-and-coming wave of queerness.” A particularly cathartic song for Scott is “Dance Evolution,” about a now-retired dance night at Metro Music Hall, one of the first places she could comfortably be herself as a trans woman. “Dance Evolution” has the crass of punk rock, with a dance-inspired drumbeat connecting the verse and chorus. Scott’s voice breaks through the buzz-distorted guitar with raspiness and purpose as she sings, “Let’s make Wednesday the weekend.”

For Localized, expect “heavy as fuck” rock n’ roll with dance beats and flashy aesthetics. Find Shecock & the Rock Princess at shecock.bandcamp.com, soundcloud.com/shecock and at their July 19 Localized performance.