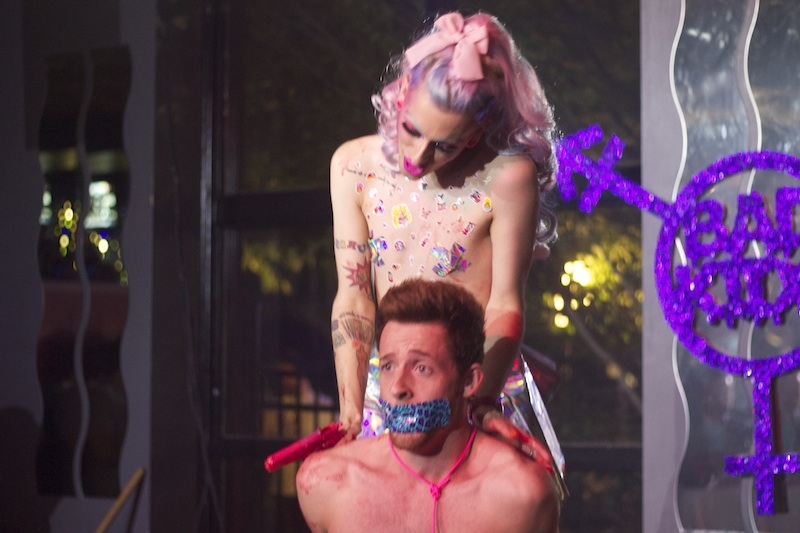 After a graceful period of socializing, hosts Willard and Mona introduced this year’s judges. The pair had great chemistry all night, and the two of them were quick with wit and filthy charm. The contestants were introduced to the audience as each walked down Metro’s makeshift runway and onto the stage. Contestants were Lisa Dank, Tony Berrow, Sissy Riot, Chartreuse, Little Shapeskin, Shawanna Deux, London Skies, Ava ZaWhore, Harry-It Winston and Allison Martin. The Bad Kid’s creative ethos was on full display—the variety of looks, styles and people competing this year was more fluid and open than ever.

The pageant was split into two parts—speeches and performances. Each contestant was invited to respond to a question they were asked in advance. The questions addressed issues facing queer people and communities today, and each contestant, whether they’d rehearsed or went off the cuff, responded with the insight of living their life as a queer artist. Chartreuse and Tony stood out with eloquent responses that elicited great applause from the crowd.

The performances commenced after a quick smoke break. Each contestant that took the stage brought a fierce and confident performance and persona. The pageant’s talent was as incredible as it was diverse. Lisa Dank—chest covered in Lisa Frank stickers and dressed in bright pastels—was first up and set a high bar for those to follow. Sissy Riot took to the stage in a pig mask and danced to an innocuous pop song before cutting the number and inviting her beefed-up “Riot Squad” up to help her out.

Tony, who had been mysteriously covered in a black shroud so far, unveiled himself to reveal a gold bedazzled body and claws that danced wraith-like to The Knife. The reveal got the wildest cheers of the night. Little Shapeskin did an awesomely choreograph dance number, complete with two back up dancers. Shawana Deux gave some fierce realness. Starting from atop the bar, Ava ZaWhore channeled Amy Winehouse in a boozy rendition of “Rehab.” London Skies sung live and did a cartwheel on Metro’s small stage in heels. Harry-It Winston began her performance in a life-size pink Barbie box, then showed a different shade with placards of Gayle Ruzicka and Gov. Herbert and massive sex toys. Allison Martin performed to “Bad” and stripped down from a suit and tie to reveal some “Bad” underwear.

As the judges deliberated, last year’s winners (Savannah Van Cartier, The Bearded Femme, Adam Antium) were called to the stage and bid farewell. Each was asked what the most memorable part of their title-holding year was, and though the responses were varied, all acknowledge the superb turnout for this year’s pageant and preliminaries and the continuous community support they receive. Mae Daye, the first Baddest Kid of All, reprised her winning performance from last year’s pageant—“When You’ve Got It, Flaunt It” cut up with “Transphobic Techno” (“Who’s got a penis? Bitch got a penis”).

Cartel then took the stage to announce what we’d all been waiting for, this year’s winners.

At the end of the night, or any given Thursday night at Metro, it’s not about winning, it’s about creating a community and fostering dialogue through performance and creativity. The resounding message of the evening—all identities respected, all are welcome.

Watch the Bad Kids Collective perform Sing the Body Electric at the Utah Pride Festival, on the East Stage at 7:30 p.m.. Cartel will perform with RuPaul contestant MILK at Metro at Metro Bar at 9 p.m. Happy Pride!