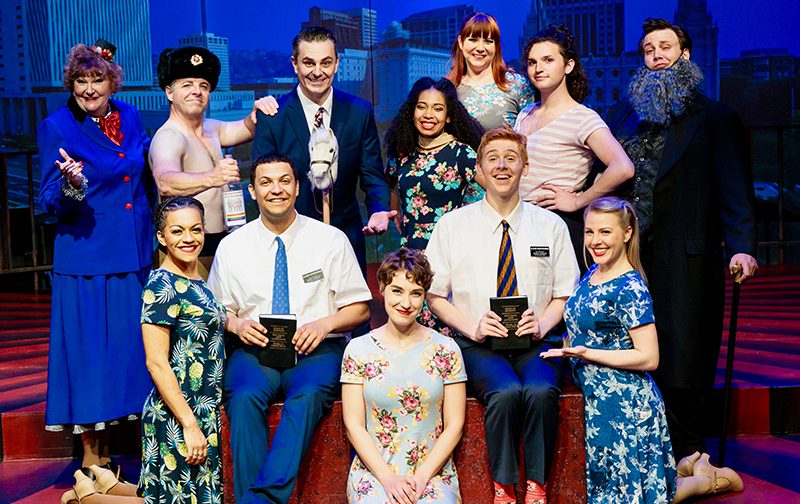 Satire has long held the role of exposing society’s corruption in a gentler, easier-to-swallow way, and this year’s Saturday’s Voyeur put on by the Salt Lake Acting Company was no different. The theatre, located just around the corner from Capitol Hill, was packed with patrons young and old enjoying their dinner and bottles of wine as they filled the seats before the show.

The first act takes place at The Church of Jesus Christ of Latter-day Saints Conference Center, beginning with the end of rehearsal for the Mormon Tabernacle Choir. After the conclusion of this practice, two church authorities come in to alert the choir that the church would be making an important announcement about extricating the “M word” from their vocabulary for the rest of time and only referring to themselves as members of “The Church of Jesus Christ of Latter-day Saints”—Jesus was mad they weren’t saying his name enough. To help those uncomfortable with this name change, they brought in the “Church Golden Boy,” Mitt Romney, who’s greeted with adoration from all.

Shortly after, chaos strikes as a power outage divides the group. A “Dark Light” hypnotizes half the group (including the two church elders) into believing they have to protect the Conference Center from attack as they leave to get guns. Once they return, they start suggesting certain members of the group are responsible for ruining the morality of the church. As the non-hypnotized half of the choir flees the scene in fear, the others begin to question why anyone ever listens to anything besides Fox News and expresses their desire to “kill the press.”

A Visit from “Mary Pop-In.”

The first act closes with the non-hypnotized half wandering around the Great Salt Lake with blindfolds covering their eyes so they will not look into the eyes of the “dark light” and fall under its spell. At this point, the queer member of the ensemble uses the time to teach the others about their preferred pronouns and the “50 Ways to Name Your Gender.”

As intermission begins, a SLAC employee came up onstage in the best dad-on-vacation outfit I’ve ever seen to encourage the audience to renew their membership for next season. He performed a rap that seemed to work as the crowd left for the lobby.

The second act begins with the characters realizing that they’re dead and located within Mormon Spirit Limbo. Confused about how they got to this point—but certain that President Trump (or “Pumpkin Head,” as they call him) had something to do with it—they decide they need a female superhero. In flies Mary Pop-In on her umbrella, which she falls off of and immediately yells, “Fuck,” beginning the second act on a high note.

As Mary Pop-In shows the recently deceased around Spirit Limbo, they come across two young Elders who have discovered their love for each other, which they share through a spirited song about saving horses and riding Elders. They also take this time to address the fact that the church sends extremely wise and worldly experienced 18 year olds to doorsteps because of their knowledge of how the church will make their lives better.

The characters then scatter as none other than Joseph Smith and Brigham Young show up. Having been kicked out of the higher-planet heavens, the pair offer their smuggling services to the residents of Spirit Limbo. For only a retroactive 10 percent of their tithings, the two will smuggle whomever could pay into the upper realms of the Mormon—I mean, The Church of Jesus Christ of Latter-day Saints—afterlife.

As the characters continue to ponder over how their lives have turned into such disarray, the topic of President Pumpkin Head is brought up once again. They recount many of his most absurd lies and their lasting effect on society. As a result, the characters decide that they cannot be complacent anymore and will get involved in the local politics.

However, the characters are in for a rude awakening as they realize their personal legislature can’t be trusted either. Reflecting on the recent election and the passing of propositions two, three and four, local legislators laugh as they overturn the public’s vote. Next comes an ode to the end of 3.2 percent beers, but they don’t need to worry because, although the percentage has been raised, the DUI limit was lowered to .05 BAC, resulting in the congressmen letting out a Dr. Evil–esque laugh.

As the musical concludes, Mary Pop-In helps the characters understand that it’s important for them to use their voices to stand up against their church when it comes out with doctrine they don’t believe in. As the characters are transported back to the Conference Center and into their choir outfits, the evening concludes with a call-to-battle for all to have more moderate views and more willingness to meet in the middle, as well as becoming more willing to get more involved politically and, at the very least, vote.

Although the first act was hard to follow at times, there were still good bits. From the second act on, the crowd was laughing hysterically and seemed to be watching much more intently. The acting from cast veterans like Dan Larrinaga, Justin Ivie and Robert Scott Smith, as well as those making their first Voyeur performance (Daisy Allred Alliyah Ann, Bradley Hatch, Matthew Tripp, Julie Silvestro Waite and Jacob Weitlauf) was incredible. However, Annette Wright as an improper Mary Pop-In stole the show and truly made it memorable. The way playwrights Allen Nevins and Nancy Borgenicht pulled from both local and national problems as a means to call viewers to action—or at least realize the absurdity of our current political climate—was well executed through this satirical musical.