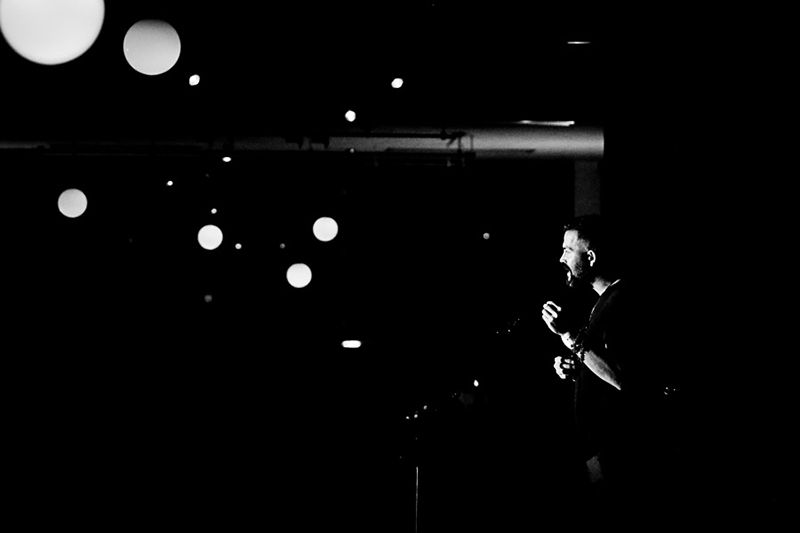 By founding The Bee, a series of storytelling competitions, Giuliana Serena and Francesca Rosa have filled a void of literary events in Salt Lake City. The Bee has been held every other month since the first event in Dec. 2014 and has seen a healthy attendance at each one. The previous four events have sold out, some in advance. Events alternate between the Urban Lounge and The Leonardo, venues with a seating capacity of around 300, providing a large but intimate setting for storytellers to recount their lives. The Bee is inspired by the national weekly storytelling podcast, The Moth, which broadcasts select live storytelling events and holds a competitive version called StorySLAM.

The Bee—which is similar to StorySLAM—introduces a “lovingly competitive” aspect to the event, inviting guest judges involved in the Salt Lake community to attend and score the stories based on a rubric that judge the stories, not the storytellers themselves. In celebration of the Utah Humanities Book Festival, which runs throughout the month of October, The Bee invited guest judges from three local, independent booksellers: Lane Richins of Weller Book Works, Rob Eckman of The King’s English and Latoya Rhodes of Golden Braid Books. Three attendees were then picked to judge alongside the booksellers, resulting in three teams of judges who scored the stories on a 0.0-10.0 scale.

The events are themed, and Saturday’s was “The Here and Hereafter”—stories of birth and death, love and grief and passing over to the other side. Those who wish to tell a story must put their names into a hat, and at the end of their story, each storyteller draws the name of the next. The stories are judged by their length, whether or not they fall under the five-minute limit, how well they adhere to the theme and whether or not they are true. As Serena remarked while introducing the event, “We can’t fact check, but we can think critically.”

Saturday’s event at The Leonardo was held in the top floor event space, an L-shaped room with a large opening leading to an outdoor courtyard in the center, with white pillars and substantial windows looking out to the west at Washington Square and the City Hall building. I arrived 45 minutes before stories to find good seating, only to find the room already full and the sounds of the classical guitar stylings of Soren Charles Green accompanied by the constant hum of conversation.

I made a trip to the bar, settled on the nearest vacant courtyard planter and engaged in some people-watching until cohosts Serena and Rosa took the stage to commence the night. Between each story, either Serena or Rosa would read from crowd-sourced responses to either of two questions, “Tell us about the day you were born,” and “Tell us about an encounter with death.”

It’s fitting that the two sisters who founded this event are raconteurs themselves. They aren’t just comfortable behind a microphone—they shine behind it. Their word choice is clear, deliberate, intelligent and often times hilarious. Their body language, facial expressions and tone of voice breathe life into even the most boring and least thought-out crowd responses. Though the focus of the night is on the storytellers, the cohosts were the ones who drew most of my attention and most of the laughs from the crowd. Future storytellers should be taking notes from these two.

Serena and Rosa began by having the crowd practice what it sounds like to listen and be completely silent. Aside from the few uncomfortable snickers or snorts of laughter, we all did pretty well. It’s amazing how quiet 400 people can be when they cooperate. Serena then reintroduced the theme for the night, the judging rubric and the rules of attentiveness and respect the crowd was to follow during the stories. Rosa marked the beginning of the event by inviting any who wished to stand and say the name of someone who has recently passed or is passing. This went on for a couple of minutes and gave a rather sentimental feeling to the room. Most people didn’t stand at all—some stood more than once.

Jennie Everson had the difficult task of being the first storyteller. She told a heartwarming tale of her infinitely supportive father who passed of cancer, and his support that she felt lived on to help her secure a job in her dream career. The tales all followed the theme of the night, which may have been left intentionally vague and open to interpretation to allow a wide variety of stories.

As with any skill, some storytellers possessed more of a talent for relating a story than others, but even the slower stories were still interesting because they came from a stranger onstage revealing a portion of their life to a room full of strangers. People told stories of dealing with religious family members, pregnancy, adoption, near death experiences, finding a dead cow high up a slot canyon and attending a funeral of ritual lament in which stoic, bearded men sob, wail and tear at their clothes in honor of the deceased. Some storytellers like Jim Rounds, Milana Perepyolkina and Ashley Sanders had been onstage at The Bee in the past, while others may have been dealing with stage fright for their first time as storyteller. Ultimately, it was storyteller Jason Tackett who ended the night with the highest score and now lives on in The Bee esteem. Other storytellers included Christy Jensen, Cole Lehman, Brian Higgins, Dee Downing and Abdullah El-Hattab.

To find out what a winning story sounds like do not miss The Bee’s next event, “Revelations,” held ​Dec. 10 at Urban Lounge. You can sign up for emails on The Bee’s website, thebeeslc.org, to find out when tickets are on sale—tickets which will more than likely sell out in advance.

[Ed. Note: A previous version of this article claimed that The Bee and The Moth were related, which was incorrect. It also claimed that there were only 300 people in the room—when there were, in fact, closer to 400—and that Milana Perepyolkina had been a storyteller at this edition of The Bee when, in fact, she had been a storyteller at the December debut. These updates are reflected in the current iteration of this article.]