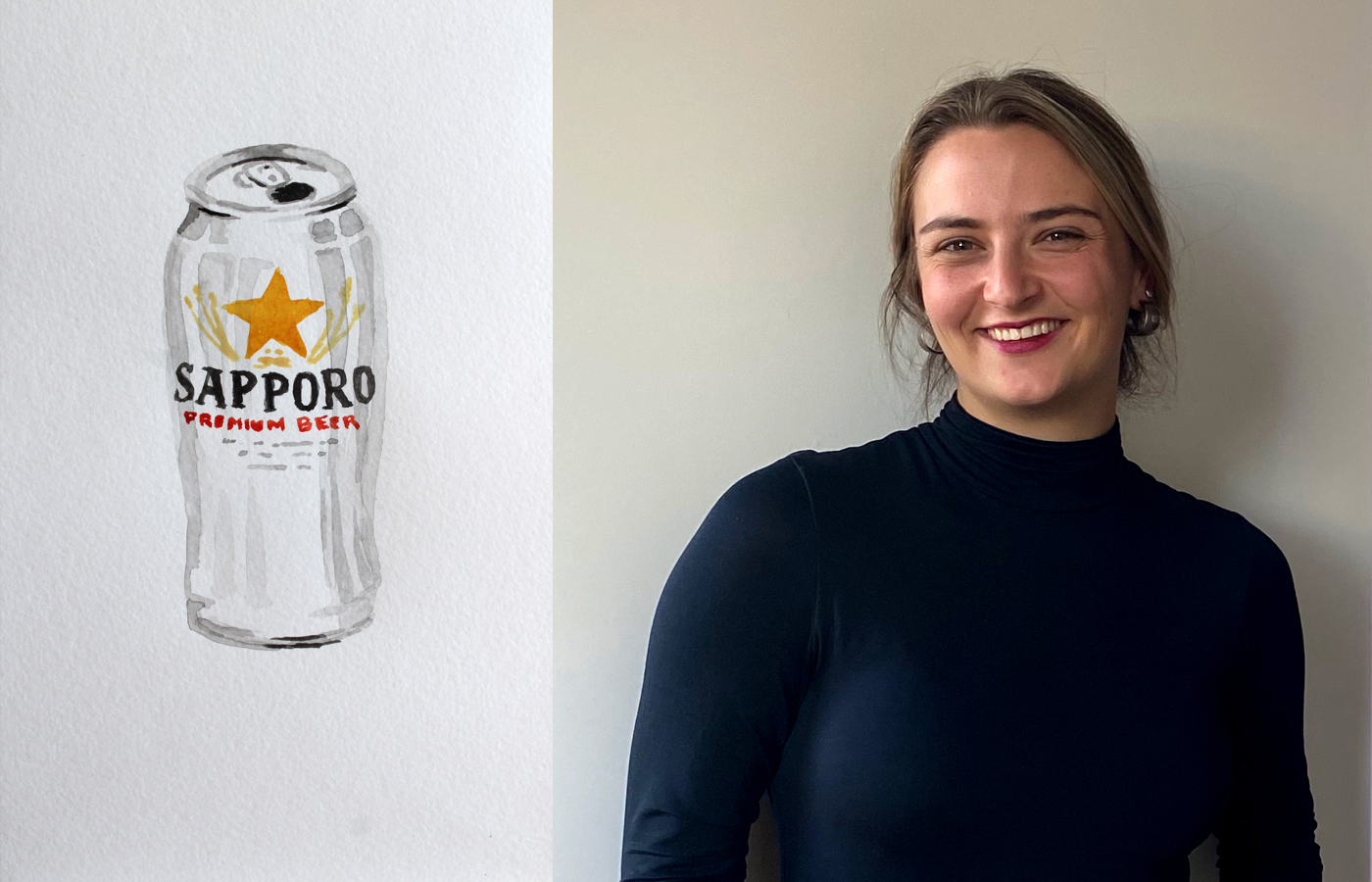 For the last six years, art galleries have been receiving the research services, direction and management of Sophie Schwabacher. She’s a University of San Francisco alumnus who began her rise in the art world studying art history and management. Currently, she is the gallery manager at Salt Lake City’s Modern West, which, in combination with Salt Lake City artists, has motivated Schwabacher to display her own art with her first-ever publicly displayed art series. What is the object and medium for her series? Beer cans depicted in watercolor.

Two experiences largely contributed to Schwabacher choosing beer cans to be painted in her series. The first was drinking an AriZona Green Tea on her porch on an enjoyable afternoon with her boyfriend. The pretty and intricate details of the cherry blossoms on the classic teal can caught her attention. She saw their correlation with branding and thought, “It might be interesting to recreate in watercolor,” Schwabacher says. All of the cans that would eventually make up her series caught her eye in a similar manner, with eye-catching, classic branding.

The second experience was seeing the billboards and company signs around the Salt Lake City area for the first time. Schwabacher has only been in Salt Lake City since October of 2020 and felt like she was seeing something from a different era, nostalgic and out-of-place. “Beer cans were similar to that,” Schwabacher says.

Schwabacher’s materials and design method for her art are simple. “It’s really important for me to use materials that [are] really accessible and not expensive,” she says. “It’s just watercolor paper and watercolors.” She keeps a small watercolor traveler set and the paper—“no stress regarding the materials,” Schwabacher says with a smile. The only other component is the beer itself, as her paintings turn out best when the object is right in front of her.

“It’s really important for me to use materials that [are] really accessible and not expensive.”

It’s also the reason the beer can is also depicted open in each painting. The timeframe for each piece is generally no more than a couple of hours. “Because I’m not including any background or shadow, or any other detail than the detail that the can provides, it’s a finite object, so I normally know it’s complete when [the painting] has the same feeling as the object for me,” Schwabacher says. This is followed up a couple days later with some touches to make certain elements pop, and that’s it.

The beers for Schwabacher’s pieces were chosen based on being classic and long-standing. Her desire was to have an impact on as many viewers as possible and invoke the same nostalgic feelings she had from each of the beers. From Rainier to Pabst Blue Ribbon, from Sapporo to Coors Banquet, each represented a time and a place for Schwabacher that had positive reminiscence. “There’s something really nice about choosing a commonplace item that people already have certain feelings for,” Schwabacher says.

Schwabacher believes these beers, in combination with the use of watercolor for visual communication, will help take viewers briefly to a time and place they are fond of. The branding plays a large part in this because these products are generally quite graphic and crisp. Using watercolor brings another element into the picture. It produces lines that aren’t perfectly straight, colors not quite so solid, and edges that aren’t perfectly clean. “There’s something nice about melding the artist’s hand a little bit, seeing more of this process of creation,” Schwabacher says, “[which] feel a little bit more like memories and maybe have that nostalgic, romanticized feeling to them, than just a picture.”

“Schwabacher believes these beers, in combination with the use of watercolor for visual communication, will help  take viewers briefly to a time and place they are fond of.”

Schwabacher’s Beer series will be displayed in Modern West’s upstairs gallery space. This space allows for a wider variety of contemporary art. “We do have gallery standards,” Schwabacher says, “but not everything has to be perfectly polished, and it’s a little bit more of a space for exploring.” It’s a place that allows artists to play around a little bit, artists whose work has utility. Modern West still believes it’s art.

The ultimate component that has inspired Schwabacher to blossom as an artist and publicly display her work has been the interaction with artists at Modern West. Her previous gallery-management experiences had been outside of Utah at locations where the art displayed was from artists who were largely coastal or foreign. This led to phone interactions being the only experience Schwabacher had with artists themselves. The Salt Lake City art scene, Modern West especially, changed this entirely, allowing her not only to manage but develop and grow with the artists around her. Aïsha Lehmann and Meggan Waltman, both currently in residency at Modern West, have been of particular inspiration for Schwabacher.

Schwabacher’s art (@whatissophie) will be displayed at the Salt Lake City location of Modern West, located at 412 S. 700 West, as part of the Summer Group Exhibition on July 16, 2021 from 6 to 8 p.m. It will also be available at modernwestfineart.com.