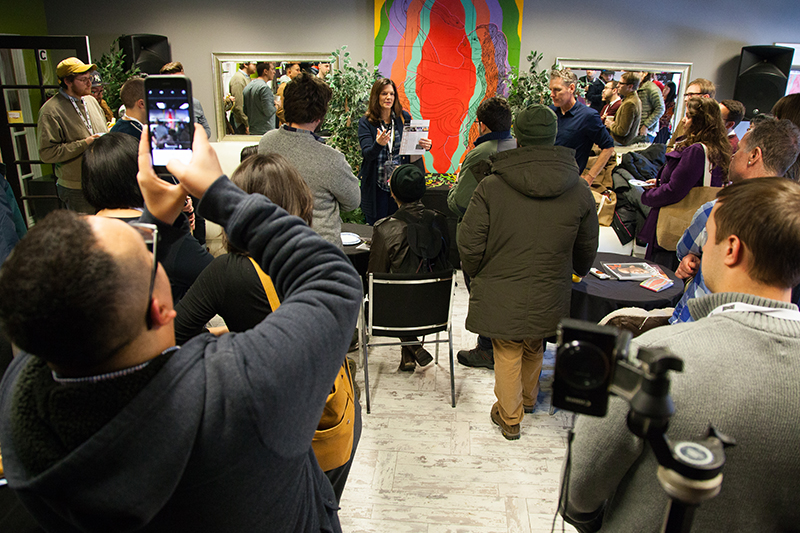 Slamdance Film Festival is a platform for independent filmmakers to share their craft with a wider audience. It’s also simply a community of like-minded artists to share and grow in their craft year-round. With this spirit of communal learning comes Slamdance Polytechnic, a series of workshops centered around the Slamdance Film Festival with the goal to connect aspiring filmmakers with Slamdance alumni and partners in order to learn more about the industry. With collaborators including the University of Utah, Columbia University, Seed&Spark, as well as Slamdance alumni, the series of workshops is intended to be a guide to honing the craft of filmmaking, utilizing technology and DIY solutions for aspiring filmmakers. The program is free and open to all.

For Peter Baxter, Co-founder and President of Slamdance, the Polytechnic program is an opportunity not only for Slamdance alumni and partners to share what they know but to encourage a supportive, collaborative learning environment for aspiring filmmakers. “It’s not as though we are striving to present answers but  looking to find solutions in future creativity,” he says. “[Slamdance Polytechnic] certainly leans far more towards project-based learning where, as a group, we are exploring these solutions.” One particular workshop for Slamdance Polytechnic is “When I Was You I Wish I Knew: The Ins and Outs of Distribution” led by recent Slamdance alumni John Charles Meyer (Dave Made a Maze) and Cullen Hoback (What Lies Upstream). This workshop is designed to help independent filmmakers retain control over their creations after the process of making the film is complete and the distribution process has begun. The aim is to empower both current and future filmmakers to keep creative control and integrity over their films, while still being able to show their films and support themselves financially in what Baxter refers to as “filmmaking sustainability,” which he hopes to promote through the Polytechnic program.

Keeping with the theme of filmmaking sustainability, Slamdance Polytechnic will also include a workshop given by Joe Russo and Anthony Russo—directors of Marvel’s Captain America franchise—titled “Two Brothers, Twenty Years: The Russo Brothers’ Past and Future.” For Baxter, it’s particularly exciting to have two commercially successful directors, who got their start at Slamdance in 1997, come share their stories at Slamdance Polytechnic. “What Joe and Anthony are bringing to Slamdance this year is this great sense of mentorship,” Baxter says. “Their program on Saturday really represents that willingness to share all that they know and how they’ve achieved what they have, and to share their new ideas and their creative visions for the future.” Having the Russo brothers come back to share their story is what, for Baxter, keeps Slamdance such a vibrant, forward-thinking group of filmmakers who support each other’s craft. “Our alumni share what they know, what they’ve experienced with others to help with their own creativity, with their own projects, whether they’re in Slamdance or not. I think it speaks to what the Slamdance community really is—not just a few but actually a great many alumni who want to do this, and we’re able to put that together as a collective and enable that to happen.”

In addition to connecting Slamdance alumni with aspiring filmmakers, Slamdance Polytechnic aims to provide other resources that can be useful to the creative process and the element of
storytelling. Another highly anticipated program planned for Slamdance Polytechnic is the “De-Escalation Room” presented by Lance Weiler from Columbia University. The idea behind this workshop is rooted in the common experience of violence quickly escalating, especially through channels of social media, and how to prevent this from happening.

In this workshop, participants will work on creative solutions to diffuse situations that could lead to violence, which Slamdance Documentary Co-Captain Beth Prouty believes can be a crucial part in storytelling. “‘The Room’ is an immersive empathic simulation that the audience participates in actively in order to learn how to de-escalate situations and incorporate myriad views into a finished project,” she says. “It will help filmmakers on the path of telling inclusive stories that are better able to heal, educate and mobilize their audiences, in addition to being entertaining” she says. Other programming includes “Crowdfunding for Career Independence,” “Social Media Charm School,” “Art Of The Pitch” and “Life As a Truly Independent Filmmaker: A Survival Guide.”

Slamdance Polytechnic promises to provide resources, practical information and learning opportunities together around the Slamdance Film Festival—giving those who are interested in the art of filmmaking a chance to go beyond simply viewing independent films at the festival and one step closer to successfully creating their own. As Prouty says, “Polytechnic is coming out of a DIY tradition in practice, but in philosophy, it’s focused on keeping the indie film community strong by building skills to navigate the industry as creative individuals while still being able to work in groups.” Slamdance Polytechnic, which takes place concurrently with Slamdance Film Festival, is free and open to the public. For more information, visit showcase.slamdance.com.