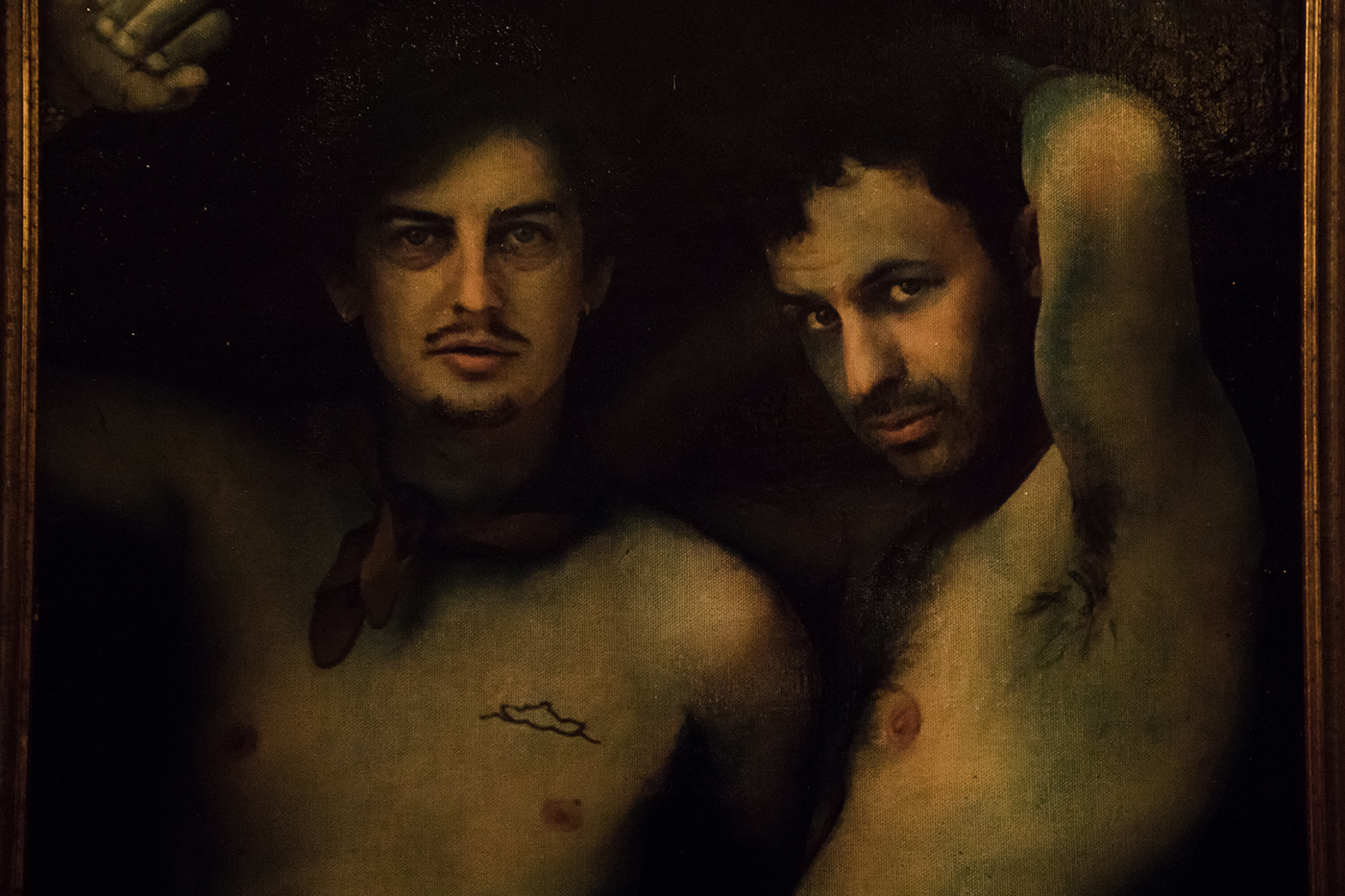 The evening of Oct. 5, 2020, I was promised full, unthwarted access to hog. A beautiful, hand-made invitation from the artists, Tucker White and Jason Dickerson, promised, among other things, FULL HOG ACCESS, an event revealing a pair of oil paintings the two had each made depicting one another nude together. The night was pitch perfect, socially distanced and masked, staged at Arlo restaurant as a small, private event. There was a pomp to it all I struggled to contend with at first—imbued in the elegance was a certain sense of farce. But FULL HOG ACCESS successfully divested me of any doubt, leaving me delighted and smiling under a warm October sky. 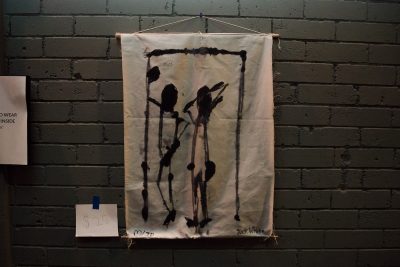 The story of how we ended up with two nearly identical nude paintings of White and Dickerson is partly a story of rejection. Earlier in 2020, after having finished a mural project downtown, Dickerson and White responded to a call from local watercolorist Madi Bollinger to send in personal nudes for her to paint. The duo asked photographer and producer Chrissy Bjornn to capture the nude image they would send in, spending an afternoon challenging one another to forego their usual modesty and go “full hog access.” Bollinger passed on their submission, but the rejection only pushed Dickerson and White further down the rabbit hole. The duo decided they would each paint a version of the photo themselves. They also created abstract mockups of the finished paintings, black-on-white figures of Dickerson and White that evoked the finished product through Rorschach-esque fidelity, which they pasted around the event space to help build anticipation for the evening’s reveal.

"By the end of the night, I felt like I understood something about the relationship between Dickerson and White."

The paintings themselves are detailed oil works—each more or less identical with a few stray details here and there to distinguish one from another. Dickerson and White stand naked and close, with White facing the viewer and Dickerson’s body facing to the left, toward White, keeping his gaze on the viewer, his penis lightly brushing against White, whose penis faces us. Of the two, only White offers the viewer full hog, while Dickerson offers semi-hog. White leans a supporting arm on the canvas’ edge and stares at us, as though we were looking through a window. Dickerson feels more coy, his arms raised, armpit visible, ribs showing through his skin. The moment these paintings were undressed, a line formed to examine them.

Dickerson and White’s pale bodies are tinged with a blue hue, a cue intentionally taken from Picasso’s Blue Period. The Prussian Blue, combined with the black, enveloping background, gives White and Dickerson an almost sickly texture. White’s tattoos stand out in black ink and the veins in their feet crinkle together. White’s tummy bears down his long frame, pretensed by an orange ascot. Dickerson’s navel rubs up against White’s wrist. They are undoubtedly beautiful men.

I admit that at first I felt a little betrayed by the obscured angle of Dickerson’s hog. I felt as though I had been denied the promised full access. As I spent more time with the paintings (and more time at the event revealing them), the symbiosis between Dickerson and White manifested. Why are there two paintings? FULL HOG ACCESS is a record of the journey Dickerson and White have taken together. The earnest fragility can only come when the two are paired together—White would seem unduly cocky without Dickerson, and Dickerson would seem too shy without White. Together, they present a massive sense of tenderness nearly undone by the initial presentation. To see the two paintings together is to see their commitment to the bit, their commitment to each other.

By the end of the night, I felt like I understood something about the relationship between Dickerson and White. As someone with body dysphoria, I was happy to see two people with bodies similar to mine contrive such a reason for us all to view them naked. Would either have endeavored to do such a thing alone? I don’t know the artists, but I somehow doubt it. The pent-up isolation of months of quarantine has, for me, robbed most days of any opportunity to truly be seen, perceived or known; endless loops with no new feedback. To see the silly spectacle of public nudity and the vulnerability therein, the tenacious speedrun toward rejection, the hogs—I was able to enjoy the night and socialize. A stiffness left my body, if only for a few hours.

In that sense, my enjoyment of FULL HOG ACCESS is inextricable from the event in which the pieces were presented. All pretension resolved itself by the end of the night. From the initial, tender invitation, to the pomp and circumstance of the black-tie dress code, to the anticipation and climax of the paintings’ reveal all made for an unforgettable night, especially in 2020.

A full retrospective of Dickerson and White’s collaborative work will be on display at FICE Gallery this November.