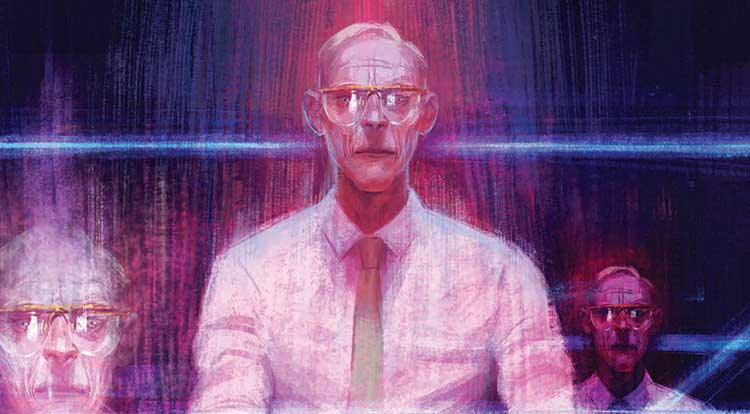 From Issue 1’s first panel to Issue 6’s last, The Empty Man takes its readers along a gruesome journey into the depths of madness and the pitfalls of organized faith. The story starts out by introducing a charismatic preacher named Abram Markoff in a decrepit Alabamian convenience store. He offers a humble and endearing sermon about solidarity and faith followed by a series of miracle healings to members of his meager congregation. Afterward, he engages in an ominous conversation with a young woman in attendance, the impact of which echoes throughout the entire six-issue miniseries. Jump forward five years: the FBI’s Special Agent Monica Jensen and her partner, CDC Agent Walter Langford, lead a task force investigating the newest deaths related to the Empty Man as well as the disappearance of the family’s two children.

The initial impression of our eponymous adversary is little more than a fairy tale boogeyman. By the end of the first chapter, though, we discover something seriously fucked is devastating this society. Over the course of five years, horrific events pop up about mysterious suicides, freak accidents, and heinous assaults, all of which result in a single phrase, “The Empty Man made me do it.” Garden-variety of cults sprout from these tragedies, each with a new interpretation for the significance the Empty Man’s role in the grand scheme of things, the most common interpretation, of course, is that the Empty Man is a—possibly the—god. It takes all kinds to make the world go round, I suppose, but when demon-like scorpion people explode out of human heads, I have to question the sort of labyrinthian tightrope act you’d have to navigate to revere these creatures as divine.

One thing soon becomes clear though: The Empty Man isn’t a collectively imagined perversion—he’s the real deal. As agents Jensen and Langford follow the trail in pursuit of the Simmons children, a series of interviews and interrogations illuminate how awful life is here. There’s a constant shadow everyone battles as there is no clear explanation behind the “infections.” Bunn’s got a wicked ability to keep you ready to fall out of your seat with suspense while still maintaining excellent control over the story’s pacing; not once did I feel like reading this story was a chore, nor did I get bored. The ending does feel a little jarring and a little anticlimactic, but by no means was I disappointed.

One of The Empty Man’s greatest charms as a comic is how dark and deranged it is. Nowhere is this made more clear than on every blood-stained page, especially the panels recounting the grizzly incidents. Chapter 3 offers one instance in particular involving a cult called the Witnesses in Greensboro, NC: A SWAT team swarms a seemingly inauspicious barn only to discover the aforementioned cabal pursuing “enlightenment” through some hellish ritual. It made me a little nauseous in the best kind of way. I have nothing but praise for Del Ray and Garland’s collaborative effort in captivating my eyes while simultaneously making me queasy in every issue—seriously, you two have something magical here. As usual, this trade comes with a cover gallery collecting various variant art for each issue. There’s nothing phenomenal (though there are some exceptionally great pieces), but they all capture the essence of this miniseries with haunting fidelity.

I absolutely love this book. When my friend Chris Wright mentioned this title to me during its original June 2014 printing, I didn’t know what to expect other than I’d probably like it. Well, that proved true and then some. This is a great addition to your October reading list, so head to your local comic book shop and check it out!