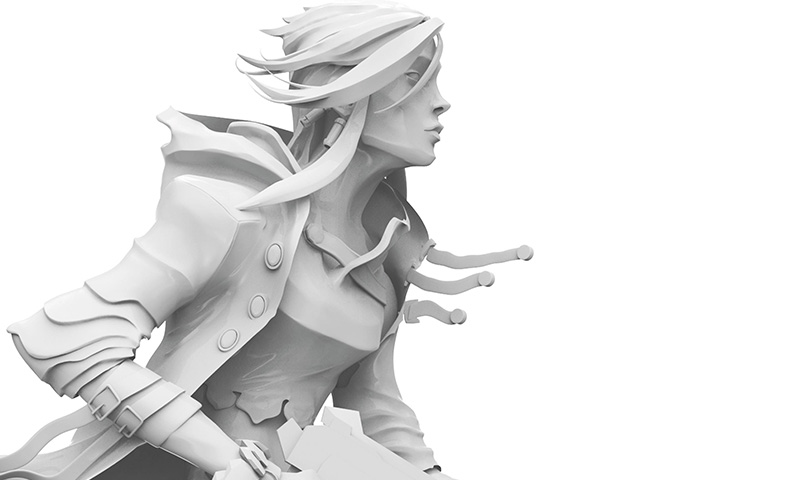 When marrying word and images, you have to consider how the viewer/reader is going to perceive the finished product. The formula is always different because the circumstances are always different and that’s what makes this dance an interesting one. In the case of Run Love Kill, it’s the art that dazzles—the images seem to have their own desperate momentum, the same way you’d call a jazz musician “desperate.”

Run Love Kill follows Rain, a gifted soldier and assassin who discovers that she may be fighting for the wrong side. She ends up on the run trying to escape her oppressive former employers, so now she must use her skills to get away. It’s all a fairly familiar storyline with some very familiar tropes.

Jon Tsuei is well known for his writing on the Tori Amos-inspired comic, Tattoo—also published by Image. It’s easy to see that both of these collaborators have a great sense of the visual since that’s where most of the story takes place—with such sparse dialogue it has to.

Eric Canete also worked for Marvel on Iron Man: Enter the Mandarin, and his style can be rough at points, but when he’s at his best, the motion implied comes right off the page. The fight sequences alone are like John Woo scenes—minus the birds. Everything feels so fast paced and visceral—it’s really an accomplishment on Canete’s part.

The first issue of Run Love Kill starts out with a incredibly fast-paced escape scene that jolts the reader right into the story juxtaposed with flashbacks we learn our hero’s name is Rain—we see her playing a cello with a father-like figure in the past, setting the tone for a major device in the entire series. Rain’s past and present are presented simultaneously and how the reader sees former affects the later. For the most part, jumping around the timeline can be a little confusing, it’s done well for the most part. It requires a tad more of your attention not to get lost. The balance gets a little off as things go on. Sometimes the storytelling can be heavy-handed, with characters spouting off long dialogues that don’t really tell us anything, but at the same time when we reach points where the story communicates that teleportation exists in this world without one expository line about it. I generally love when the story is shown to me and not told to me, but there are so many elements at play here I really think that some exposition could really help make things clear.

When I was finishing the fourth issue I felt as though something major was about to break in a Tyler Durden, red pill or blue pill sort of way. There are a lot of influences I can see here from movies like Blade Runner or even Kill Bill, and while I don’t think that the goal of a story in comic forum should be to be cinematic, it works well for the most part for Run Love Kill.

I know I’ve done some complaining about the series here, and I truly think that some things could have been done better, but at this point I could see this series turning everything on it’s ear and becoming something completely unexpected. Run Love Kill has been far from perfect, but I wouldn’t drop out of it just yet. –James Orme