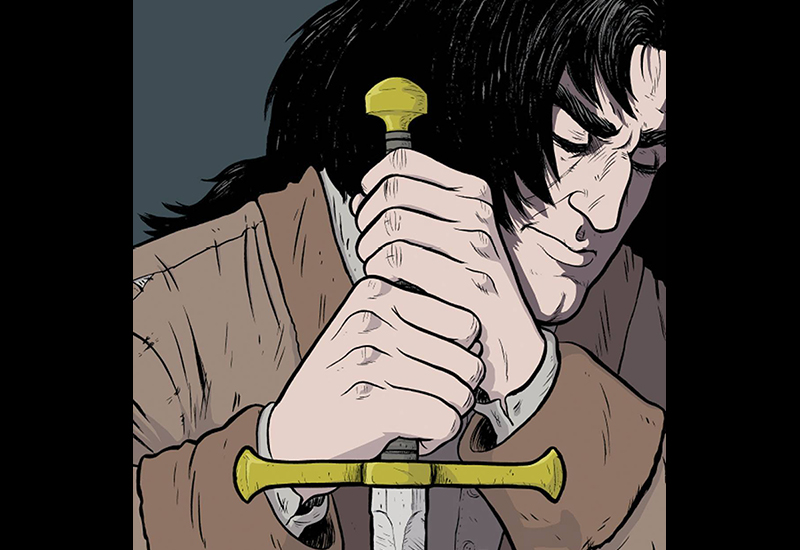 Review: The Lion Of Rora

I don’t know if there’s an audience for a graphic novel about an obscure 16 century historical hero, but I can’t see how this attempt was supposed to work in The Lion of Rora. When I reach for a comic book it’s always to be entertained. Documentaries, nonfiction and many other mediums convey this kind of a tale very well, but history or historical fiction in the medium of a graphic novel is a tough road to travel. It’s difficult enough to create something both visually stimulating and well written enough to propel the reader. Adding in the hurdles of historical adaptation, it becomes a nearly impossible feat. The best examples I can come up with are Frank Miller’s 300 and Alan Moore’s From Hell, both of which are wildly entertaining but take quite large liberties with their subject matter. Where the The Lion of Rora goes wrong for me is that it feels like it wants to be a movie and settles for being a comic book, or it wants to give so much historical information that the story suffered. The pacing is rough, and I felt lost when it came to the details of the details of the plot. Unfortunately, I never connected with the main character, Joshua Janavel, at all. He’s supposed to be the common man—a farmer who takes up a righteous fight, and ends up being a man who Napoleon called “The greatest military tactician the world has ever known.”

Those comic readers who are up on their 16 century European history may find a sweet spot in their heart for The Lion of Rora, but outside of that, I can’t imagine the average comic book fan adding this to their pile. Don’t get me wrong, I believe in the comic book medium whole-heartedly, but this didn’t get where it needed to be.

There is a scene in The Lion of Rora where Joshua and his family are splitting up parts of the bible to memorize because it could be taken away by the lords at anytime. It has a poignancy and emotion to it that the rest of the story seems to lack, and conveys so much of the narrative. But honestly, if the most exciting moments of the comic are memorizing the bible, how can the end result hope to keep a readers attention.

I get that this is a story of a little-known figure in history whose deeds were of great importance. Janavel led the first open rebellion against royalty for religious freedom, but—while I wouldn’t want to dissuade anyone from learning something about history—this comic just feels like medicine. The artwork is well drawn, but has little presence when it comes to the storytelling. Nothing about it compels the reader and it comes across very flat for the most part. I think the book’s biggest shortcoming is that it really fails to capture how epic this story is. This is the Italian Braveheart, and it comes across on the same level as one of those animated bible videos they used to sell in the mall. The art and approach feels very all-ages–friendly and while I don’t think that blood and gore would immediately make this comic better, the story feels so disconnected from brutal time this is supposed to take place in.

While Ruth Fletcher Gage and Christos Gage, are successful TV writers, working on shows like Law & Order: SVU, and Daredevil (two shows I adore), I can’t help but get impression that this passion project—that was researched for twenty years, may have been something too close to their hearts and some perspective may have been lost.

I really hate to tear The Lion of Rora apart because I can imagine it being done better, I just can’t imagine a graphic novel version of this story that would be exceptional.