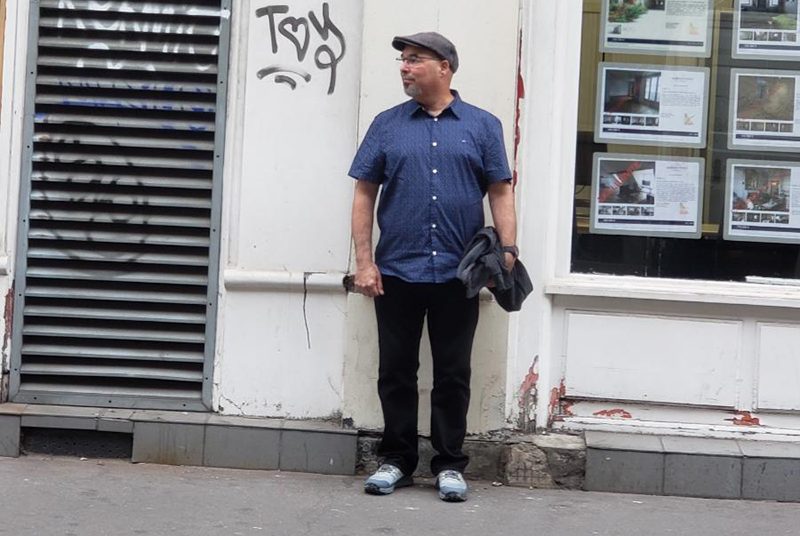 Jack Kirby famously said “comics will break your heart.” As someone who reads, creates and thoroughly loves the medium of comics I have found that to be true. However, I have also found that the inverse is even more true: Comics will fill your heart. Reading Jaime Crespo’s Tortilla #5 reminded me of just how much heart goes into and comes out of comics. Crespo has been creating comics for over three decades, and you can feel the love he has for the medium through the stories he shares in the newest issue of his self-published work. From the touching tribute to his mom at the beginning of the book, to his memories of wacky mishaps with his friends as a kid and even in his unlikely friendship with a spider, the reader gets the sense that Crespo’s work isn’t just an extension of his personality—these comics are Jaime Crespo. SLUG exchanged emails with Jaime Crespo to learn more about his work.

SLUG: You’ve been making comics for over 35 years–that’s a huge accomplishment! What led to you initially starting to make comics? Who are some of your influences?

Jaime Crespo: How I started making comix may go way back to being a little kid and always drawing things. We were pretty poor, so I used torn-open paper bags, backs of already-written-on paper, cardboard—whatever I could draw on basically. Being an (ahem) “older” cartoonist, I grew up in a generation that was pre-cable, pre-internet, pre-cellphone—not many distractions, yet [I was] always looking for distractions. So, drawing and writing my own comix made sense as I had my own little world to preoccupy me.

As for influences…whew. That’s a huge question as well! The short list: A lot of cartoons on TV from the Warner Bros. stable, the original Gumby, some Hanna/Barbera, Rocky and Bullwinkle. Then, the comics in the Sunday paper: Peanuts, B.C. Nancy et al. As for comic books, I never really got into super hero stuff (really! People seem to have a hard time believing me on that). I read a lot of Harvey comics; Casper, Hot Stuff, Richie Rich as well as inheriting Sad Sack comics and a bunch of Disney Comics that were in Spanish. Carl Barks was great! EC Comics, Vault of Horror, etc. Of course, Mad Magazine was the BEST! The Hippie comix blew me away as a little kid and by high school was into The Fabulous Furry Freak Brothers, R. Crumb, Rick Griffin, Dave Sheridan, Greg Irons, Lynda Berry, Jim Woodring, Carol Tyler and a personal favorite, Bob Armstrong.

JC: Besides the actual draftsmanship and writing, it’s been pretty much [the] subject matter that has changed…or, more like evolved. I tend to write/draw more “slice of life” subject matter, à la Harvey Pekar who, ironically was a personal friend and somewhat of a mentor.

SLUG: Your website mentions that you returned to self-publishing comics after having your previous strip published by multiple papers throughout the country. What was that process like?

JC: Well, I actually had a few publishers for my comic books over the years before I did any strips. That would be the late 1980s through the mid 1990s. Having a publisher was a drag for me. I was married with a small kid, going to school and working. After three months of slaving away on a comic book and having the first run sell out, only to receive $100, was not only insulting, but rather soul-crushing to boot. So, back to self-publishing I went. Heck, I was from the first wave of DIY punk rockers so it made sense to me. The last set of strips I did were started around 2004. I was drawing six-panel strips about everyday, slice-of-life stuff. The strip was called “Slice O’ Life.” It got picked up by a few weekly papers, and by then it was shortened to four panels and the title was changed to “Slices.”

The process was pretty straightforward. I would write/script a whole bunch of stories, both from my past and present day. I’d try to write an entire story, but in only four panels…which is not always an easy feat—LOADS of editing. One of the operatives of my stories were and still is that they don’t always have to be about me or even involve me. Once I felt I had a flowing story, then the penciling and subsequent inking would commence.

SLUG: I’ve only read Tortilla #5, but I really liked it! I especially liked the autobio comics of you as a kid (which seem to be common, based on the descriptions you’ve written about the other issues of Tortilla), especially since those are the kinds of comics I’ve been interested in making lately. What do you find appealing in revisiting these old memories and putting them down on paper?

JC: The autobio, and even biographical stories, are my bread and butter, as I mentioned earlier. Sometimes they’re easy to do, and sometimes they can be difficult emotionally and I’ll wait literally years before I’m ready. The story “From the Bottom of My Heart,” from the recent Tortilla #5, was a true tale and the kid I wrote about in there with me was my best friend. He died a number of years ago and I just now got around to where I could tell one of our goofy kid stories. I was telling a group of African-American cartoonists at last year’s Sol-Con in Columbus, Ohio this story and John Jennings, a master cartoonist, co-founder of Sol-Con and friend, encouraged me to draw it up. He said that perhaps it’s time. He was right.

SLUG: Do you ever find it challenging to re-create moments that might’ve happened years or even decades ago? Do you think you’ve ever accidentally altered your memories?

JC: I think that all of the time! Yes, I do find it challenging most of the time. The graphic novel I am currently working on about my time as a janitor in a Tenderloin SRO hotel in the mid-1980s is easy, as I kept a journal AND made some of the incidents [into] strips before the graphic novel was considered, though I have an extremely bizarre memory. I’m the sort of person who can remember the name of every kid in my third grade class or name all of the guys I played college baseball with, but when asked what I had for dinner last night or what I did last week, forget about it!

SLUG: I really like the art in the book! Black-and-white comics tend to be my favorite. To me, it looks like everything was hand drawn—is that the case? Can you talk a little bit about the advantages of working traditionally rather than digitally?

JC: Thank you. Advantages? Hm… I’m an old school cartoonist. So, naturally I’m more partial to paper, blue-line, pencil, ink, pen and brushes. However, I can be open minded as well. My son did talk me into buying an iPad recently and I’ve been fooling around with the Procreate program. It’s fun, but also a different mindset (for me) to use. I’m a zillion times faster with pen and ink, but I do like how you can erase so easily with digital. Still, my most-used tools are coffee, whiteout and music.

SLUG: I was reading your blog and you seem to participate in a lot of comic shows. I also noticed you’re involved with the Latino Comics Expo. Do you have a favorite show that you participate in?

JC: I am getting busier in that realm. The LCE (Latino Comics Expo) is a favorite for sure, but I also dig Sol-Con (aka the Black and Brown comic expo held on the Ohio State University campus) and CXC (Cartoon Crossroads Columbus), and also looking forward to the Latinx Comix Festival in Modesto, CA. I’ve attended S.P.A.C.E. and SPX. I used to frequent the original APE (Alternative Press Expo) and the San Diego Comic Con, but one is no longer around and the latter is just way too big and so opposite of what I do that I find it a bit taxing to even enter the building.

SLUG: Your blog also mentions a graphic novel you’re working on. Can you tell us a little more about that project?

JC: Sure. As I mentioned above, I used to live and work in a San Francisco Tenderloin SRO hotel in the mid-1980s. This was when heroin was (believe it or not) beginning to wane and this “new” substance known as crack (referred to at the time in SF as “Hubba”) was coming in like gangbusters! Oh, how the hilarity ensued. I kept fairly copious notes when I lived and worked there and they eventually became comic strips that were entitled “Tales From the Edge of Hell.” They were about the people who lived in the hotel and neighboring hotels and the subsequent behavioral attitudes towards one another and the prevailing culture that was the then-Tenderloin experience. I have edited this opus down from around 450 pages to roughly 200+. I’m hoping to have it completed by year’s end.

You can read Jaime Crespo’s blog and order his comics at corntortillapress.com.